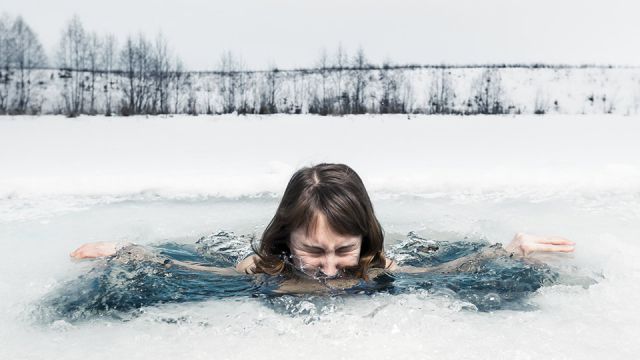 From a very young age, most of us are taught that if we’re not warm enough, we’ll “catch a cold.” Even to this day, the concept that the common cold can be “caught” when the body is exposed to colder temperatures, most often during the winter months, is held by most educated people. That’s why it’s called a cold — because you’re more likely to contract it during colder weather!

But it turns out that this is yet another old wives tale. While our risk of catching a cold certainly increases when the weather is colder, it’s not the cold temperatures themselves that actually lead to a person contracting an infection — that doesn’t even make sense! Theories abound as to what actually makes colds more prevalent during the colder months, but all of them agree on one thing – being cold doesn’t give you a cold!

In fact, it turns out that exposing your body to cold temperatures for short periods of time is very much a good thing, and many cultures around the world recognize this. In parts of Russia, the practice of making a hole in lake or even sea ice and jumping in is a recreational pursuit, and in Scandinavian countries, it’s considered downright ridiculous to have a hot sauna without a cold plunge into icy waters afterwards.

There’s a reason for this: cold immersion, or cold thermogenesis as it’s called these days, has a wide range of health benefits.

Even in the U.S., high-profile athletes are beginning to integrate cold thermogenesis into their training as a way of improving performance and endurance. It’s even rumored that Michael Phelps swims in a pool maintained at 55 degrees Fahrenheit to improve body temperature regulation and economize energy metabolism. That’s pretty darn cold, in case you were wondering.

So, what’s with all the hype around cold thermogenesis? How can immersing your body (or even just your face!) in uncomfortably cold water provide a wide range of health benefits? Let’s find out!

Studies in rats show that cold exposure can boost thyroid function, a phenomenon also demonstrated by this study, which found that voles exposed to cold thermogenesis had markedly increased thyroid activity. This means that if you suffer from hypothyroidism (an underactive thyroid gland), cold thermogenesis may help to regulate your thyroid and restore hormonal balance.

Here’s something you probably didn’t know: inside our bodies, there’s both good fat and bad fat! White fat is considered to be the “bad” kind, or at least the form of fat you want to have less of, while more brown adipose tissue (brown fat) is considered a good thing in the human body.

In a nutshell, more white fat means you’ve got more stored energy in your body. This occurs when you consume an excess of calories, particularly in the form of carbohydrates. While this might be a good thing if you’re planning on running a marathon and need the excess energy reserves, in day-to-day life this simply means your risk of unhealthy weight gain and obesity increases considerably. Brown fat, on the other hand, is burnt off quickly to provide heat — making us warmer, and less likely to pack on the pounds!

As explained earlier, increasing exposure to cold temperatures leads to more brown fat and less white fat. The implications for this are wide-ranging, but there’s one in particular that might interest some people: obesity prevention!

Studies in mice indicate that triggering cold thermogenesis in mice by mimicking cold temperatures increases core temperature and locomotor activity. The run-on effect of this was significant in the studies: glucose spikes and dietary obesity were prevented.

Does this mean you can eat whatever you want as long as you go and jump in a cold shower afterwards? Probably not, but it does mean that you can offset the negative effects of the occasional slice of cake or Thanksgiving dinner!

This headline may be enough to put even the most educated reader off, but the concept is actually quite simple. As we age, our mitochondria — the energy generators located within our cells — start to become less efficient. As time goes on and our bodies are exposed to more chronic stressors, mitochondrial function plummets — and so does our energy, circulation, ability to regenerate cells, and our ability to recover from illness and injury.

This is where cold thermogenesis comes in. By exposing our bodies to short bursts of intense stress (you’ll know what I’m talking about when you hop into a shower turned all the way to cold!), cold thermogenesis activates mitochondrial biogenesis — the creation of new mitochondria. This in turn ramps up your energy levels, makes your utilization of the compounds you eat far more efficient, and generally just makes you more healthy and youthful… thereby preparing you for you next bout of intense stress!

There’s plenty of ways in which you can expose your body to temperatures cold enough that they initiate thermogenesis: applying an iced towel to your neck and face, shoving your face into ice-cold water, applying a freezer gel pack to your arms, back and neck, or simply going outside with no clothes on in the middle of winter… exactly what your mom warned you not to do when you were a kid!

My favorite method, however, is simply to go for a cold plunge in the lake a few times a week. No matter how nasty the weather, I jump right in, being sure to fully immerse my head for a few seconds and then spending a few minutes swimming around to ensure the cold gets into all the hard-to-reach bits! On those days when swimming isn’t an option, I simply have a cold shower. It may not be as pleasant as a hot shower, but it’s definitely worth it!