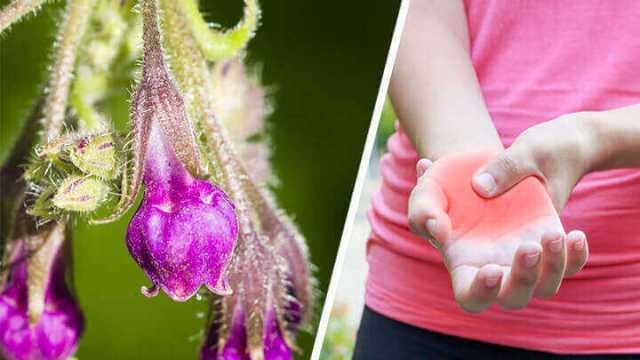 Alternative health and medicine is riddled with paradoxes. Certain healing tonics that can either heal or harm depending on how they’re administered. Plant-based creams and balms that can soothe the skin but also poison the internal organs if used in excess quantities. Comfrey is without a doubt a prime example of the healing paradox, and has been the subject of considerable debate in recent years.

Comfrey, a perennial herb native to the ditches and riverbanks of Europe, has long been used in traditional medicine. Medical records dating back to the Middle Ages commonly make reference to herbalists prescribing comfrey for a wide range of ailments, and up until the 20th century, it was considered to be “one of nature’s greatest medicinal herbs.” Undoubtedly, comfrey has healed hundreds of thousands of ailments across the globe, and in the right hands it continues to do so today.

Much of the controversy surrounding comfrey has developed in response to recent studies that suggest comfrey can have a toxic effect on the body, especially the liver. A study published this year in the Journal of Public Health Nutrition reviewed the biology of comfrey, explaining that this toxicity is due to the herb containing pyrrolizidine alkaloids (PAs), which are then thought to be converted into highly reactive pyrolles that can damage the liver and certain other organs.

The claim is not without merit, but it appears that in most cases comfrey is perfectly safe to use. A literature review published in the Journal of Trends in Pharmacological Sciences concluded that “comfrey might not be as dangerous to humans as current restrictions indicate.” Other research suggests that the warnings surrounding comfrey are largely unfounded, pointing out that the toxicity claims surrounding comfrey are derived from studies that isolated the PAs and fed or injected them into animal subjects at doses much higher than would ever be experienced from standard therapeutic use of comfrey leaf.

That view is supported by plenty of other research, with a 2014 review of 239 professional herbalists in the UK finding that 75 percent of them prescribe comfrey on a regular basis, and with good results. They found that comfrey was particularly effective in the treatment of tendon, ligament and muscle problems, and for the treatment and healing of wounds.

Clearly, in the right hands, comfrey is perfectly safe to use.

The many health benefits of comfrey

As the star of hundreds of years worth of traditional folk remedies, it’s apparent that comfrey can provide a wide range of significant health benefits. Here are some of them.

Comfrey has long been used a natural remedy for speeding up the healing process. While our medieval ancestors may not have known the exact mechanisms by which comfrey achieved this, we now know that this healing effect is due to comfrey’s high concentrations of vitamin C and calcium. This makes it an effective way to ensure rapid and successful healing of superficial wounds, but may also help in the healing of bones and muscles internally.

And it’s not just medieval hearsay. A 2007 double-blind study of 278 patients used a topically prepared application that contained 10 percent comfrey leaf extract as the active ingredient to verify these claims. Researchers found that “a highly significantly and clinically relevantly faster initial reduction of wound size…was found.” They found that patients’ wounds took on average three days less to heal completely than the control group, and that there were no adverse effects or intolerability issues. It doesn’t get much better than that, folks!

The bucketloads of antioxidants in comfrey, in particular vitamin C, make it an excellent go-to for skin problems and insect bites. Comfrey is often prescribed by herbalists and functional practitioners to treat bad cases of eczema, psoriasis and even acne. Not only that, rubbing an ointment containing comfrey leaf extract on your mosquito, spider or tick bites can soothe the itching and prevent infection from developing.

Unlike many other natural remedies, comfrey has received considerable attention in the scientific community — and not just for controversial reasons. One of the areas that has received the most interest is with regards to bone and joint injuries and chronic disorders.

For example, a 2004 study published in the Journal of Phytomedicine found that comfrey’s anti-inflammatory, analgesic (pain-relieving) and tissue-regenerating properties could be utilized to reduce the pain associated with ankle sprains, and dramatically increase ankle flexibility. A study published three years earlier found exactly the same thing. Another article, this time published in 2009, demonstrated that “comfrey root extract showed a remarkably potent and clinically relevant effect in reducing acute back pain.” Researchers also noted that they were rather impressed with how quickly the comfrey ointment worked, stating that its effect was apparent within one hour.

As discussed earlier, comfrey contains high concentrations of bioavailable vitamin C. Because a healthy immune system relies, at least in part, on external sources of vitamin C, comfrey is a great way to boost your immunity. Because of its potential toxicity issues, I wouldn’t recommend taking comfrey internally unless prescribed by a trained professional, but external use is a different story. Our skin is able to absorb certain quantities of the vitamin C and other beneficial compounds in comfrey, meaning topical application is a much safer way to get those immune-boosting effects.

You’ve probably guessed by now that comfrey has rather remarkable powers when it comes to healing. It can speed the healing of bones (it’s not called “knit bone” for nothing), close up wounds and alleviate pain… all of which are linked to inflammation. The anti-inflammatory compounds in comfrey mean topical application in areas where arthritis, gout or other inflammatory disorders are causing you pain, can go a long way towards reducing your symptoms and improving mobility.

A 2011 study published in the Journal of Chiropractic Medicine demonstrated the anti-inflammatory powers of comfrey by using a topical cream containing the herb on 43 patients suffering from osteoarthritis of the knee. Patients were asked to apply the cream three times per day for six weeks. The researchers concluded that “topical comfrey formulations were effective in relieving pain and stiffness and in improving physical functioning and were superior to placebo in those with primary osteoarthritis of the knee without serious adverse effects.”