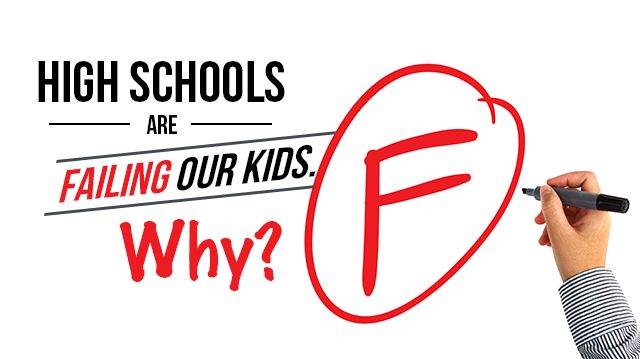 According to a report released by the ACT testing service, more than 60 percent of 2012 high school students were not prepared for college. Alarmingly, these numbers are based on the test scores only of those students who voluntarily took the college entrance exam. Those who chose not to take the test likely would have had lower scores.

Other studies confirm this trend. In 2015, only 14 percent of surveyed professors thought that high schools were adequately preparing students for the next step, down from 28 percent in 2004. So not only are students unprepared, they are increasingly less so. In this particular study, college faculty found students working up to standard in technology, teamwork and verbal communication, skills that are taught in life more than high school. Areas where students failed to perform included:

One is left to wonder what high schools are doing right.

The poor report card doesn’t stop at university level instruction. Employers of young adults straight out of high school are also reporting poor readiness for the job market. Four in 10 high school grads needed additional basic job training in 2004, and by 2015 it was six in 10.

The elephant in the room is woefully low standards in high schools across the nation. 20 percent of high school students report that it is “easy to slide by” in their classes. Just 54 percent report being only “somewhat challenged.” Some schools are taking measures to address this issue, but programs aimed at increasing rigorous curriculum options are not accessible by all students. For example, only 67 percent of high schools offer advanced placement courses. This number shrinks to 40 percent for smaller schools.

Some educators actively try to keep standards low. The D.C. Public Charter School Board was advised to deny a charter school certificate in the city to BASIS, a rigorous high school educational program. Advisers claimed that the school’s emphasis on advanced placement classes was unrealistic for low-income students. Luckily, the board overruled the recommendation. BASIS is now one of only a handful of academically rigorous options for D.C. public high school students.

To make matters more complicated, no one can agree on what the ideally rigorous high school curriculum should look like. Controversy is commonplace over how much homework is appropriate for a 14-year-old and which books are challenging enough without ruffling feathers. Teachers are told to enforce a rigorous curriculum, but they are not told how. Some educators are looking past curriculum and teacher focused education. They see developing student agency as the magic bullet for success.

The goal is hardly new: creating engaged students who take an interest in and responsibility for their own educational development. The methods of getting there, however, are even more blurry. Education innovators focus on how technology can be used by individual students in a way that allows young people to direct their own learning with minimal direct oversight. One teacher could, theoretically, help a whole class of students with individualized learning plans. AltSchool, an educational startup sponsored by Facebook CEO Mark Zuckerberg, takes the lead in piloting this type of education. With a $20,000 annual tuition fee, however, AltSchool is hardly set to mainstream in the near future.

Perhaps an even less comfortable question than where our schools are failing students is whether our students’ failure begins in the school system at all. Problems with scholastic achievement may begin much earlier, at home. The SEED School in Washington, D.C., recently featured in the educational documentary “Waiting for Superman,” only sends students home on the weekends. During the week they live at school, where Facebook is banned and enrichment activities abound. The program has seen notable success and is slowly expanding. They hope to bring a SEED school to every urban school district in America.

Whether the future holds innovation in curriculum, teaching, student agency or school hours, a future with successful American students will need to include innovation of some sort. The same old thing just doesn’t seem to be working.