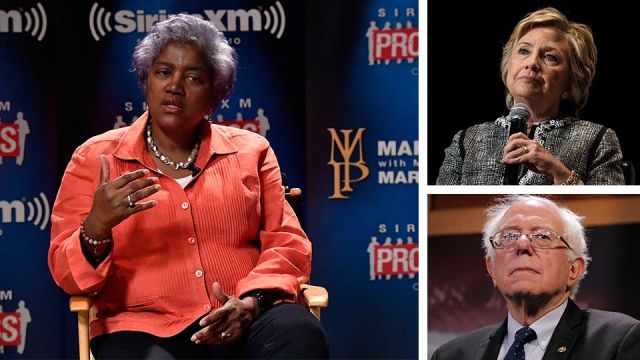 According to former DNC Chair Donna Brazile’s new book, it appears as if the Democratic National Committee worked a deal with the Clinton campaign to make sure she would prevail in the 2016 Democratic Party Presidential Primaries.

She vigorously claims a group controlling Clinton’s campaign called “Hillary Victory Fund, Hillary For America” and the DNC had worked a deal. Apparently, Clinton could control the entire party’s finances, strategy and all money raised, while all she had to do was invest money in the DNC. “By September 7, the day I called Bernie, I had found my proof and it broke my heart,” claims Brazile.

One of the most amazing parts of @donnabrazile‘s piece isnt just the money laundering, but HRC controlled DNC hiringhttps://t.co/CFpNnzhsM3

Although there have been some dubious claims surrounding the situation since last year, this is the first time that a big name inside the Clinton campaign has spoken about the situation in length.

Previously, the DNC faced criticism for setting up the debates against the two outside of prime time, such as on Saturday nights.

Also, Brazile faced intense backlash herself when emails released proved that she gave Clinton some of the debate questions ahead of time while she was working at CNN. She now calls this “a mistake I will forever regret.”

There were also many other emails released during the primary election which show how Clinton was the favorite over Sanders.

With all of that said, Brazile’s new account provides an even more detailed coordination to plot against the Vermont Senator. Essentially, it appears as if the DNC owes Sanders an apology if Brazile’s account is true, which so far it appears to be.

Brazile further writes, “The funding arrangement with HFA and the victory fund agreement was not illegal, but it sure looked unethical. If the fight had been fair, one campaign would not have control of the party before the voters had decided which one they wanted to lead. This was not a criminal act, but as I saw it, it compromised the party’s integrity.”

She also claims that she told Sanders about the unethical arrangement, and told him that she had doubts of whether Clinton could beat Trump in a general election.

To Brazile, a major reason the DNC wanted to make this unethical deal was due to mismanaged party funds. Apparently, they were $2 million in debt, which stemmed from overspending in the 2012 presidential election.

As for the current state of the DNC, it’s not completely understood if they have addressed these problems head-on. Tom Perez is their chair who was put in over Keith Ellison, a choice that was by many as another way to give elites control of the party.

Brazile claims that the DNC is having a hard time raising money, while other parts of the party are gaining intense strength due to the anti-Trump movement.

The news has created conversation online:

I think what Donna Brazile just did not only took so much courage, it was a HUGE step toward healing a deep rift/wound from 2016.

Nobody should be surprised today. https://t.co/MTnh61CzYu

If you’re a Bernie Sanders supporter, your vote never counted.

What do you think about Donna Brazile’s claims? Do you think Sanders was robbed of a potential primary win, or was it fair? Let us know.