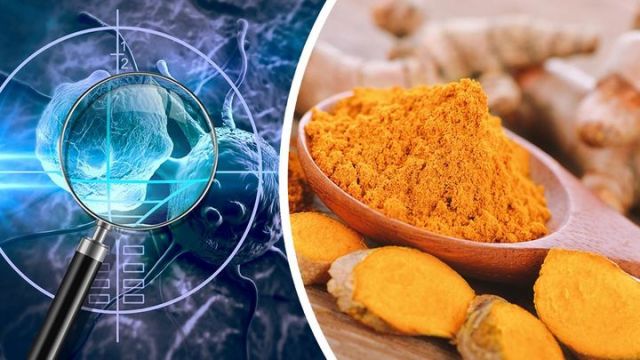 Dieneke Ferguson might not be alive if it weren’t for the spice turmeric, which has been used for centuries as an herbal remedy and to flavor meals (especially curry).

Ten years ago, this British woman (who is now 67) was diagnosed with a rare but deadly disease known as multiple myeloma, which is a form of cancer involving plasma cells in the blood. With this condition, the white blood cells, which are normally part of the body’s defenses, become cancerous and wreak havoc on the bones, the immune system, and the kidneys.

Initially, Ferguson tried three rounds of chemotherapy and endured four stem cell transplants, but to no avail. Describing her plight she explained that “I have been on all sorts of toxic drugs and the side-effects were terrifying. At one point I lost my memory for three days, and in 2008 two of the vertebrae in my spine collapsed so I couldn’t walk. They injected some kind of concrete into my spine to keep it stable.”

In desperation, Ferguson decided to try treating herself with a “golden spice” called curcumin, which is a naturally occurring chemical compound in the herb turmeric after she had heard about how another woman (named Margaret) had used it successfully to treat her myeloma.

Ferguson began taking eight grams (about two teaspoons) of curcumin per day for about five years. As a result, she is now vastly improved to the point where her cancer count is considered both manageable and negligible.

Jamie Cavenagh, professor of blood diseases at London’s Barts Hospital, who has subsequently co-authored a report on Ferguson’s case, believes curcumin was a decisive part of her amazing recovery. As Cavenagh explains, “When you review her chart, there’s no alternative explanation [for her recovery] other than we’re seeing a response to curcumin.”

Dr. Abbas Zaidi, a hematologist at Barts NHS Health Trust, who contributed to the report on Ferguson, also believes that curcumin played an important role in her improvement.

As Dr. Zaidi explains in the report, “Here we describe a myeloma patient who started a daily dietary supplement of curcumin when approaching her third relapse. In the absence of further anti-myeloma treatment, the patient plateaued and has remained stable for the last five years with good quality of life.”

As you might expect, many conventional medical practitioners remain skeptical of the idea that compound in a common spice could help someone beat cancer, particularly one this deadly.

However, Dr. Ajay Goel, a cancer researcher and director of Baylor University’s Center for Gastrointestinal Research, who has conducted a number of studies investigating curcumin’s medicinal qualities, says that there is evidence that the herb can alleviate rheumatoid arthritis, treat depression and augment chemotherapy.

Dr. Goel does not believe curcumin will help everybody, but he’s convinced the compound does have substantial medical benefits. The reason for that is that curcumin is loaded with antioxidants, anti-inflammatory agents and anti-tumor properties.

Scientific studies on curcumin’s benefits have been mixed, but even skeptics admit that it can be a good thing to add to your diet. However, the household spice turmeric contains just two to three percent of curcumin by weight and the compound is not easily absorbed by the body. Combining it with black pepper can help with absorption.

While not everyone is convinced that turmeric is a miracle spice, it is clear that it does contain a lot of beneficial compounds. For instance, Wendy Bazilian, a registered dietitian, doesn’t think the herb is a “cure-all,” but she insists that “there’s no question that there are some health properties associated with the spice.”

For more info on how the turmeric can improve your health and wellbeing, I suggest you check out this overview. To learn more about Dieneke Ferguson’s amazing recovery I recommend this video: