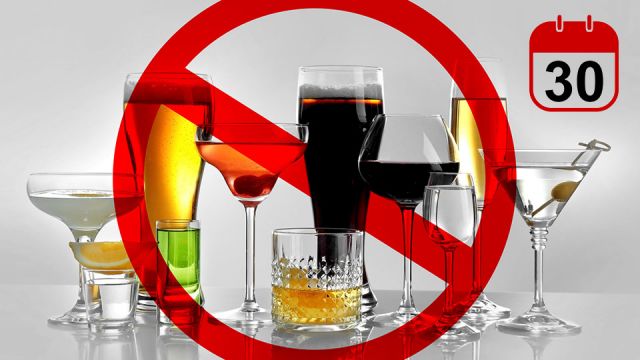 I probably used to drink too much. That is, I used to drink about as much as the average 20-something. Drinking is social. It’s fun, and it’s also something we do far too often. But just because it’s normal, doesn’t mean it’s healthy.

It’s normal to have a few drinks on the weekend, or a beer after work, or some wine with dinner (or maybe all three). However, as I discovered, even my mild drinking was affecting me in ways I’d never noticed, and had once seemed normal.

Personally, I come from a particular culture where nearly 80 percent of the population admits the country has a national alcohol problem. Americans aren’t much better, where one in four people admit to regular excessive drinking. Obviously, calling a quarter of the population alcoholics would be hyperbolic, but that doesn’t mean they have a perfectly healthy relationship with alcohol.

Questioning my own relationship with the good stuff, I decided to prove I didn’t have a drinking problem with a dry month. It seemed pretty easy: all I had to do was not do something. How hard could that be?

The first few days without alcohol

The first few days were pretty easy. I just didn’t drink anything. However, the toughest part was every so often not being able to get to sleep without a nightcap. Sometimes I’d just sit in bed, staring at the ceiling. Reading helped, but getting my Zzz’s on without my little buddy really sucked.

After a few days, it really started to bother me, but it was nothing compared to the frustration of trying to relax after work. There’s nothing like a cold one with friends after a long day, so what do you do when you can’t drink? My substitute of tea really couldn’t take the edge off, and it was impossible to enjoy myself after work.

Nothing seemed like much fun. That’s because one of the great things about alcohol is how it increases dopamine production. Alcohol literally makes things more enjoyable, and without it the world seemed extremely boring. And man was I bored out of my sober brains.

Weekends were tougher for me

Things got even worse on weekends. Friday is pub day, but not for me. At a loss for what to do, on my first Friday I stayed at home and drank a nice, refreshing can of… lemonade. I don’t have much of a sweet tooth, so it was miserable, and I was alone. All I wanted was something with a bit of flavor, like a nice Smorgasvein.

Bored and craving any stimulation, I decided to try a spot of binge eating. So I went out and got some junk food, but could barely eat anything. I felt like Homer in this classic scene from The Simpsons. “What’s happening to me? There’s still food but I don’t want to eat it!”

Again, this is pretty normal. According to researchers from the Francis Crick Institute in London, alcohol activates brain cells that promote hunger. During one experiment, researchers found mice on an “alcoholic weekend” ate anywhere between 10 and 25 percent more food than usual. So that explained why I couldn’t finish my second burrito.

By the second week, I could see the benefits

So far, being sober was pretty lame. I couldn’t sleep, couldn’t eat and was bored all the time. However, by the second week, I’d started to notice one big upside to not drinking: I had a lot more money to spare. That’s because alcohol is (brace yourself for this one) surprisingly expensive.

The next positive thing I noticed likewise crept up on me, but had been staring me in the face the whole time: my skin looked better. That’s because alcohol is a diuretic, which everyone knows means it makes you pee more. However, one lesser known fact is that all that fluid has to come from somewhere, thus alcohol makes you dry out — including your skin. For me, this meant people suddenly stopped overestimating my age by about a decade, and started only missing the mark by around five years (seriously).

As time went on, my mood and sleep improved

By the end of the month, I’d also uncovered another nice perk of not drinking: I wasn’t quite as cynical. Alcohol is a depressant, and even mild but consistent consumption can subtly make you unhappier. When I stopped drinking, the world started to seem a little nicer. Not great, but not terrible either.

By the end of the month, I was also even starting to sleep better, and less. This is when I discovered that rather than improve my sleep, my nightcaps were actually interrupting my circadian rhythm and blocking REM sleep. It was easier to nod off, but harder to actually get a decent snooze.

I learned that moderation is key

This is the part of the story where I’m supposed to say it’s been X days since the last time I succumbed to the Devil’s brew, but that’s not true. You don’t have to be an alcoholic to be negatively affected by booze, and you don’t need to be a monk to live a healthy lifestyle.

Nowadays I usually drink one glass once a week, and sometimes on special occasions. When I do go to the pub, I take it easier than I once would have, with just one or two beers. The big difference is that before my dry month, alcohol was a standard grocery item alongside bread and milk. Today, it’s something I savor from time to time.

Rather than grab a cheap slab for the weekend, I now occasionally buy something fancy to spread out over a few months. It’s a healthier relationship, where alcohol is something special, not a routine. Maybe this doesn’t sound like a solution for everyone, but it works for me.

You should do what works for you, because in the end, it all comes down to one simple question: is it making you happy?