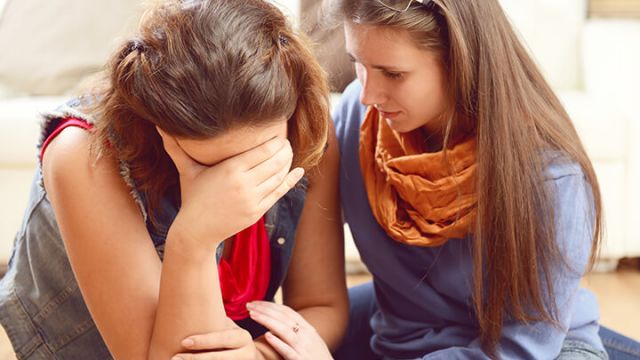 People in the grip of anxiety and depression often see the world quite differently. So, it’s not exactly surprising that they’d describe their experiences a little differently too.

The link between depression and language

In fact, a host of prominent writers (Sylvia Plath, Virginia Woolf and David Wallace Foster) have suffered from serious mood conditions such as manic depression and bipolar disorder, which seemed to be inextricably connected to their exceptional verbal fluency. This has led some researchers to speculate whether or not it would be possible to identify depressed people from the way they use language.

For instance, clinical psychologist Mohammed Al-Mosaiwi recently conducted a study, published in the journal Clinical Psychological Science, which analyzed language use by well-known individuals with depression (like Kurt Cobain), as well people using Internet forums dedicated to depression. Al-Mosaiwi and his colleagues found a consistent linguistic style in people suffering from clinical depression.

Do people with depression engage in ‘absolutist’ thinking?

As Al-Mosaiwi explained, “For the spoken word, snippets of natural language of people with depression have also provided insight. Taken together, the findings from such research reveal clear and consistent differences in language between those with and without symptoms of depression.”

The researchers behind this study used Linguistic Inquiry and Word Count software to screen for verbal patterns. What they found is that people with depression tend to use “absolutist” language instead of more relative forms of expression. Al-Moasaiwi and his colleagues hypothesize that this is because people with depression tend to filter out nuance and context in favor of an “either-or” perspective.

Choosing words and phrases that “denote totality” — as opposed to less sweeping and final expressions — seems to be symptomatic of people suffering from clinical depression. For example, depressed individuals tend to describes their lives, marriages and relationships in broad black and white terms and as if their view was the last word on the topic. Here are some examples:

Are people with depression more self-focused?

The researchers also found that individuals with depression tended to use pronouns like “I, “myself,” and “me” a lot more than ordinary people. On the other hand, non-depressed subjects tended to use more connected and relationship-oriented pronouns like “us” and “we.” Al-Moasaiwi speculates that “This pattern of pronoun use suggests people with depression are more focused on themselves, and less connected with others.”

The scientists conducting this research believe that textual analysis methods can ultimately yield greater insights into conditions like depression and anxiety. In the future, they also hope that text analysis combined with artificial intelligence will help psychologists, guidance counselors, and other mental health professionals better identify at-risk individuals.

It’s more than a little ironic that some of the most acclaimed writers in the world have suffered from mood disorders. In addition, there no denying that there is a firm link between manic depression and creativity.

No doubt, people suffering from severe anxiety and depression have often found some measure of solace by turning their personal anguish into words and sentences that strike a chord in everyone who has faced unhappiness, adversity, and the pain that is part of the human condition.

Nevertheless, it’s probably no accident that people with depression tend to focus more on themselves and engage in “absolutist” thinking than their non-depressed counterparts. After all, when your ego becomes both your focal point and the measure of all things, then it’s almost inevitable that dissatisfaction will follow as a consequence.

Life always exceeds our capacity to describe it or pass sweeping judgment on it. In addition, when we put our needs and expectations center stage, then we set ourselves up for disappointment because life is never going to revolve around us. The new research on the link between language and depression strongly suggests that shifting the focus from “me” to “we” can be a step in the direction towards better mental health.

Of course, shifting one’s perspective is just one way of approaching depression. Talk therapy, nutritional supplements, exercise and herbal remedies can all play an important role in boosting your mood. For some additional ideas on improving your outlook naturally please click here.