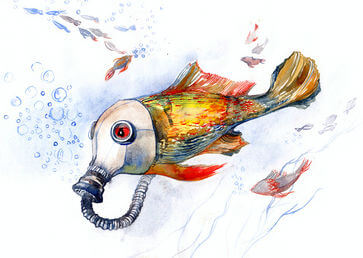 Many of us have heard of Japan’s Fukushima nuclear plant, which is currently leaking radioactive water into the ground, as well as into the ocean. Less well-known, however, is the crisis happening right now in South Florida, where heavily polluted water from Lake Okeechobee is being dumped into two surrounding rivers which feed directly into the Atlantic.

While these two situations have obvious differences, and the radiation leaking from Fukushima is far more devastating in scale, they have one distinct similarity: they are threatening the health of our oceans, including our marine ecosystems and sea life. Additionally, the damage from both may be far more widespread than we imagine.

The Fukushima nuclear plant was originally damaged in 2011, when the tsunami and earthquake hit Japan. The cooling systems of several nuclear reactors were hit by the storms, and three of them subsequently melted down. The current leak is the fourth major leak from Fukushima’s storage tanks since the damage, and is the worst of the four.

The levels of radiation around the plant, in fact, are now reported to be 18 times higher than had been previously calculated by officials. The radiation emitted by the leaking water was said to be around 100 millisieverts per hour, however, the Tokyo Electric Power Company (Tepco) admitted that the readings were taken using dated equipment that could only calculate up to 100 millisieverts per hour.

New measurements, calculated using more advanced instruments, show radiation levels of 1,800 millisieverts per hour. These levels are high enough to cause death within four hours of exposure in areas close to the leaking tank. For the people who were working for several consecutive days to repair the leak last week, this is grave news indeed.

According to Tepco, another pipe has been discovered in the plant leaking 230 millisieverts of radiation per hour. What’s more, according to the BBC, the radiation which is spreading throughout the Pacific off of Japan’s coast could reach the United States by 2014, in low levels considered ‘safe’ by the World Health Organization (WHO). While the levels are expected to be low, this is still extremely disconcerting.

Off of Japan’s coast, marine life is being wiped out by the radiation. However, it’s not just Japan’s coast that is currently in danger – we are facing an environmental disaster right here at home, as well. In South Florida, toxic waste from Lake Okeechobee is being dumped into the nearby St. Lucie and Caloosahatchee Rivers, and is polluting our coast and killing sea life.

While the sludge being filtered into the St. Lucie River, the Caloosahatchee River, and subsequently the ocean by Lake Okeechobee is not radioactive, it is filled with pesticides and herbicides containing nitrogen and phosphorus from surrounding farmland, as well as silt and bacteria-laden animal waste.

The huge amount of rain that has fallen in South Florida this season has raised Lake Okeechobee’s water levels over two feet too high, and the water is still on the rise. The lake’s drainage system, including the Herbert Hoover Dike, is severely outdated, and has proven ineffectual to handle the overwhelming amount of water.

To drain the lake, federal engineers have been dumping overflow into the St. Lucie and Caloosahatchee rivers. All of the pollution and agricultural waste from the lake is now filling the rivers, killing oysters and destroying sea grass beds. The bacteria levels in the rivers are so high that signs have been posted by Martin County warning against swimming.

What’s more, the toxicity is emptying into the ocean, turning Martin and Palm Beach County’s normally clear, blue waters a sickening green. Van Blakeman, captain of the dive boat, Narcosis, which operates in Riviera Beach, said, “it looks like whale snot all over. We don’t have a bad reputation yet. But if it continues, we will have a bad reputation.”

For residents living near both rivers, the river and ocean creatures of the area, and the thousands of tourists who visit Palm Beach County looking to relax and enjoy clean, sparkling ocean waters, this is trouble on all fronts.

Sadly, this is not the first time that this has happened. The St. Lucie and Caloosahatchee rivers have been frequently used as a dumping ground for Lake Okeechobee’s overflow, whenever severe weather and heavy rain hits the area. Things get especially bad after hurricanes, and in 2004 and 2005, the St. Lucie suffered the most extensive pollution.

South Florida residents are furious that the lake’s outdated drainage system has been in place for years, with little to no attention by the government. Earlier in the year, Governor Rick Scott and the Florida Department of Environmental Protection agreed to an expansion of cleanup projects in the area, of almost 900 million dollars. However, this project is expected to take nearly two decades to complete.

Governor Scott has also pledged 90 million dollars to build a new bridge along Tamiami Trail, which would both restore natural water flow to a section of the Everglades, and eventually ease the dumping of Lake Okeechobee into the two surrounding rivers. In a release, he said, “every drop of water that we can send south and keep out of the Caloosahatchee and St. Lucie Estuaries is a win for Florida families.”

This environmental crisis in South Florida is causing harm for thousands of people, animals, fish and species of vegetation, as well as polluting our nation’s beaches and coastlines. The Rivers Coalition is currently circulating a petition to stop the river dumping, and donations are being warmly welcomed.

If you are located in or near the St. Lucie County area and are interested in helping with the cleanup efforts, visit the the county Emergency Support Function  page to see how you can help.

While the Lake Okeechobee crisis doesn’t reach the magnitude of the Fukushima radiation leak, it hits a lot closer to home, and both areas need all the support and assistance they can get.