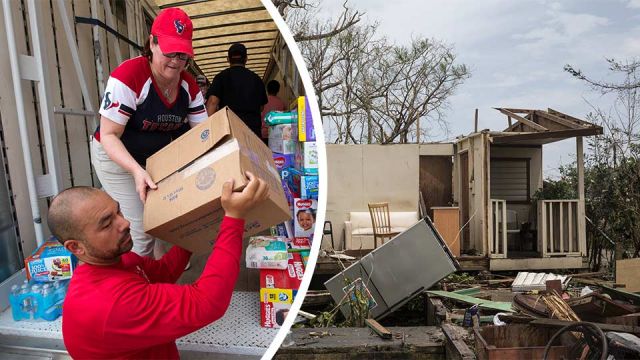 The latest reports are that the White House is expecting to approve disaster aid for Puerto Rico by the first or second week of October – leaving the devastated island waiting weeks.

WH @POTUS two to three weeks is unacceptable. Texas received it within a week of the devastation from Hurricane Harvey. #Racism in play?

Lawmakers have so far approved $15 billion in relief in the wake of Harvey, but aide to the House Appropriations Committee, Jennifer Hing, said today that there will likely be congressional action on the next installment of disaster aid to Puerto Rico by the middle of next month.

But the island’s governor, Ricardo Rossello has called for a significant aid package, telling CNN, “We need something tangible, a bill that actually answers to our need right now … Otherwise, there will be … a massive exodus to the (mainland) United States.”

At five days today since Hurricane Maria tore through the island, humanitarian aid is arriving far too slowly. Puerto Ricans are short on food, fuel, clean water, and most of the island still doesn’t have access to electricity. On top of that, 1,360 of the 1,600 cellphone towers are out. The New York Times has claimed it could take four to six months for the 3.4 million residents to have their power restored.

John Mutter, a university professor who specializes in natural disasters, told Vox that electricity was vital to preventing illnesses after the hurricane. Hospitals are struggling to get access to diesel fuel to run generators, and it seems that hysteria is starting to spread among residents.

“This is without a doubt the biggest catastrophe in modern history for Puerto Rico,” Rossello said.

According to the Federal Emergency Management Agency (FEMA), so far, just six FEMA Urban Search and Rescue forces are deployed to the US Virgin Islands and Puerto Rico. The US Coast Guard, the US customers and Border Protection, the US department of defense, and the National Park services are also assisting there. So far, all these agencies together have rescued 180 people and searched just 45 structures.

The Guardian also reported that once the island’s main port reopened over the weekend, 11 ships were able to bring in water, cots, generators and food. However, repairing all the damage to buildings and infrastructure will require significant more resources.

Over 36 hrs #Trump tweeted 16 times about football & NOT ONCE about 3.5M Americans in #PuertoRico #PuertoRicoRelief

FEMA has so far disbursed $2.1M for #PuertoRico relief. If that sounds like a lot, consider @POTUS trips to Florida cost $3M each.

Puerto Ricans, though US citizens, don’t have voting representation in the US congress and don’t have electoral votes for the president. In light of the slow response by congress to the tragedy facing Puerto Rico, some have argued that Trump and congress feel less political pressure to care about the island. Others have argued that the lack of response coincides with the lack of media attention given to Puerto Rico compared to Texas and Florida.

Meanwhile, people on social media have criticized President Trump for being more concerned about “trolling” the NFL for its protest against racial injustice, than about the situation in Puerto Rico.

By the way, Trump’s Katrina is happening right now in Puerto Rico. He’s trolling the NFL while an entire US territory is devastated.