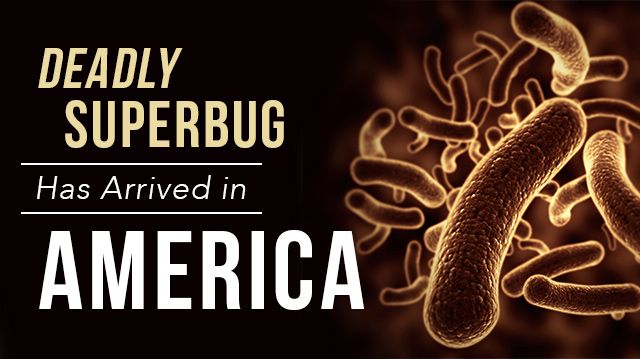 A long-dreaded superbug hits the United States, igniting fears that we may be reaching the end of the road with antibiotics. Meanwhile, the medical community is scrambling to find out how the antibiotic-resistant bacteria CRE was contracted and if it will spread.

A particularly dangerous superbug, dubbed a “nightmare bacteria” by scientists, is on the rise in the United States. This superbug strain belongs to the family of bacteria known as CRE (carbapenem-resistant Enterobacteriaceae). What is particularly alarming is that these germs often are resistant to antibiotics, according to the Centers for Disease Control and Prevention (CDC). This one deadly bug could kill half of patients who become infected.

Last month, the antibiotic-resistant strain was found in the urine of a 49-year-old Pennsylvania woman treated in an outpatient military treatment facility in that state. Defense Department researchers believe that the woman carried a strain of E. coli resistant to the antibiotic colistin, reports a study in Antimicrobial Agents and Chemotherapy, a publication of the American Society for Microbiology.

Why is CRE resistant to antibiotics?

Normally, seven types of antibiotics treat E. coli. Colistin is a “last-resort” antibiotic used with patients who have multidrug resistant infections, including CRE. Yet this particular strain of E. coli is resistant to all antibiotics. It was barely a year ago that scientists in China first reported that the mcr-1 gene in bacteria was colistin-resistant, according to the Department of Defense.

Currently, medical professionals don’t know why or how this particular strain of E. coli became resistant. However, according CNN’s Dr. Sanjay Gupta, it may have happened because of an overuse of antibiotics in which, “the bacteria become smart, and they develop a resistance.”  At other times, suggests Dr. Gupta, “they may spontaneously mutate.” If the patient did develop the mutation spontaneously, it could then spread throughout her body.

In a 2015, CDC Director Dr. Thomas Friedman made a pledge that the government agency is committed to fighting antibiotic resistance. As a start, Dr. Friedman told patients to ask their healthcare providers if antibiotics were truly needed to fight their ailment.

Limit the spread of resistance

Antibiotics are extremely important in reducing the impact of infectious diseases. Yet as resistant bacteria develop and spread the effectiveness of antibiotic treatment declines, posing a very serious threat to public health. Antibiotic resistance has become a growing problem in the United States. The World Health Organization (WHO) warns that it is one of the biggest threats to global health today.

Misuse and overuse of antibiotics is one of the main reasons resistance is spreading. But there are steps you can take to reduce the impact and limit the spread of resistance, suggests the WHO.

Meanwhile the WHO encourages healthcare professionals and pharmacists to only prescribe and dispense antibiotics when they are truly needed.

What about natural antibiotics?

“Misuse and overuse of antibiotics have steadily pressured bacteria to develop resistance to several classes of drugs, rendering them ineffective,” says Dr. Andrew Weil. Because of this, Dr. Weil recommends limiting antibiotics to serious bacterial infections and never to use them for viral infections.

Scientists and public health officials had long warned that if the resistant bacteria spreads, treatment options would be seriously limited. While natural, whole foods with antibacterial properties may not provide an entire remedy, they can certainly  be used as the first line of defense against seasonal ailments, perhaps limiting the use of antibiotics.