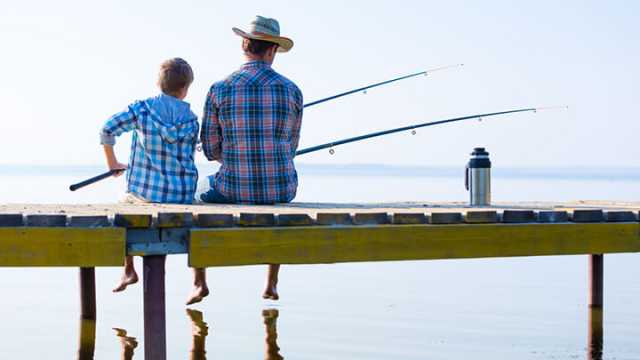 “Everyone is struggling and going through some kind of pain. Therefore, be kind to those you meet.” It is some of the wisest advice I’ve ever heard and it came from a person I least expected to hear it from — my father.

I can only remember seeing my dad cry once. He was sitting at the bottom of the stairs and my mother was putting her arm around him consolingly. I thought for sure he must have stumbled and hurt himself badly as he was sobbing uncontrollably. I quickly learned that his pain wasn’t physical. My dad had just learned that a friend of his at the YMCA had lost a son in a car accident.

I had never expected such an outpouring of empathy from my father. Growing up, I often found him warm, affectionate and fun to play with, but he could also be moody and remote. As a teenager, the distance between us grew even wider. When I became unruly, for instance, he responded by trying to bully me into good behavior.

Like many young men, I resented my father, but I also held him in awe. At times I felt intimidated by his imposing 6 feet 3 inches rugby player physique, but I also wanted to be more like him too. Nevertheless, I found his efforts to reign me in and straighten me out both clumsy and insensible. If only he was a little bit more emotionally intelligent, I reasoned, then we wouldn’t clash so much.

In hindsight, I’m wise enough to realize that much of the tension between fathers and sons is inevitable and that most of his behavior was motivated by love. It’s hard to see that when you are young and immature, but today I can more truly appreciate what a remarkable man my father is. Here are a few life-changing lessons I learned from my dad that I think can benefit everyone.

Fitness and athleticism are two things I’ve always associated with my dad. I was particularly surprised, then, when I learned from my mom that my dad was an ex-smoker. “He gave cigarettes up for you,” my mom told me some time when I was in grade school.

That knowledge made a deep impression on me. Perhaps he didn’t want to expose my siblings and me to secondhand smoke or set a bad example. Of course, maybe he was thinking long term too — he wanted to make sure his kids grew up with a father. Whatever the reason, the fact that he was doing it for us meant the world to me.

The necessity and importance of sacrificing on behalf of others is one lesson I drew from my father’s example. I’m sure it wasn’t easy giving up a long-standing nicotine habit. But knowing my dad, I bet his willpower and determination were strengthened because he was doing it for people he cared about. The older you get, the more you realized that love entails sacrifice. You give up things you enjoy for others, but when you do you often discover intangible rewards you scarcely could have imagined.

Time and again, my father put his kids and family first. I’m sure I dragged him to many activities and events he wished he could have avoided. But he always made an effort to be there if it was important to his children. It was his example of sacrifice which taught me an invaluable lesson about love. Put simply, showing up day-to-day demonstrates how much you really care. And ultimately, that kind of attention makes such an indelible impression.

I feel my dad has imparted so many life-changing lessons. One of my favorite activities — jogging — is largely due to his influence. I’ll never forget the first time my father took me and my younger brother for a jog. I was about 10 and my brother was four years younger. We didn’t run very far, very likely just a mile. But I remember the feeling afterward precisely. It was a mixture of exhaustion and exhilaration. My muscles may have been achy and sore the next day, but I had managed to keep pace with my fleet-footed father.

What stands out about that day is how much fun our run was and how satisfying it was afterward. I don’t think my dad planned it that way, but I believe I learned to associate strenuous activity with a sense of accomplishment that led to feelings of satisfaction and relaxation.

Part of the joy of climbing a mountain is the scenic view from the top. But a panoramic vista is especially meaningful precisely because of the effort you put into reaching the summit. There are no shortcuts in life. Sweat, hard work and effort are all a necessary part of the process. That’s true whether you are climbing real mountains or proverbial ones. Incidentally, it’s hardly an accident that my two siblings and I are lifetime exercise enthusiasts.

3. The importance of persistence and grit

The importance of persistence, grit and a never-quit attitude is one of the most important qualities I’ve learned from my dad. My father started his own business (teaching public speaking) almost 40 years ago. I was still a teenager when he was launching his venture, so I vividly remember helping to fold brochures and perform other duties in a home-based office.

Seeing my dad build a business from the ground up was quite an education. I experienced first-hand the tenacity and fortitude you have to have to cope with rejection and adversity on a daily basis. It seemed that he had to make a hundred calls every day just to get one promising lead.

When you are young, you think doors will open by themselves. But I’ve since seen very talented musicians, writers, artists and entrepreneurs struggle to get the recognition they deserve. Even if you have 100 doors slam in your face, you still have to keep knocking.

That never quit attitude is something my dad exemplifies. He hasn’t slowed down or considered retirement even though he’s in his eighties. Indeed, my father still teaches part-time as a professor. He even runs an occasional program for his consulting business now and again.

Last year, however, was the first time he’d missed a class or day of work in decades. My dad contracted CA-MRSA, a very dangerous antibiotic-resistant staph infection, which he most likely picked up while working out. But not even MRSA could keep my dad out of commission for very long. If you get knocked down, you just get back up. That’s the kind of inspiring example my dad has set all his life.

As you might gather, my dad is a tough cookie, but he also has a soft spot for others. With that in mind, I’d like to share one final life-changing lesson my dad taught me. My father came from a very modest background in Ireland and he arrived in this country with little more than a decent job.

But he built a very good life for my family. Today, many of the classes he teaches include immigrants from all over the world. I can tell my father marvels at the diversity he encounters and that he has a deep empathy for young students who are adjusting to a new country. He lived it too, he understands.

There’s not a prejudicial bone in my dad’s body. Everyone is an individual and he loves listening to people’s stories. Besides, “Everyone is struggling and going through some kind of pain. Therefore, being kind to those you meet is only natural.” I can’t think of a better lesson, and I learned it from my dad. Happy Father’s Day.