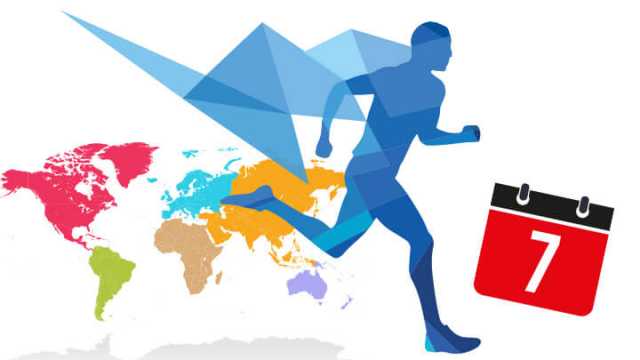 For some people, the word “impossible” doesn’t exist. Take Sinead Kane, for instance, an Irish woman who just broke barriers by completing a feat called the World Marathon Challenge. In the event, participants attempt to complete seven marathons in seven days on seven different continents.

The first leg of her journey — a 26.2-run through frozen tundra — took place in Union Glacier, deep in the heart of Antarctica. Temperatures around race time hovered about -8 degrees Fahrenheit (-22 Celsius) with the windchill. From there, Kane boarded a chartered plane that took her to cities in South America, North America, Asia, Europe, Africa and Australia. Overall, Kane finished six additional marathons within a week’s time. It was an amazing physical, logistical and mental challenge that would push even the fittest athlete to the absolute limit.

Temperature extremes and the sheer wear and tear of such a grueling series of races would seem enough of a challenge, but Kane had to contend with an additional adversity — she’s legally blind. By finishing, she became the first visually-impaired person to complete the World Marathon Challenge.

Kane was not the only competitor in the event facing a physical hardship. BethAnn Telford, now 47, was diagnosed with brain cancer thirteen years ago. Her medical treatments took a toll on her body, but not her spirit. In fact, because of her cancer care, Telford’s bladder can only handle small amounts of liquids. As a result, she had to intake fluids via catheterization during the race — talk about dedication and grit.

Telford was not just running the race for herself, but to raise awareness for pediatric cancer. As she said during the event, “the people that have read my story know this isn’t about BethAnn Telford, but this is about the millions of people that are suffering and getting the word out.” I am inspired to report that Telford crossed the finish line as this article went to press.

Chris Bertish is another epic adventurer embarking on a daunting journey to fulfill his dreams. His goal is to become the first person to paddle upright solo across the Atlantic Ocean. The South African native has a motto — “Dream It, See It, Believe It, Achieve It” — which pretty much sums up his can-do attitude. As Bertish tweeted about six weeks into his amazing ocean voyage, “Self-belief is not something you can teach; you have to earn it, from within yourself. Dig deep and go after your goals!”  By the way, you can follow Bertish’s progress and amazing journey by clicking here.

Extreme athletes scale mountains and paddle oceans. In the process, they encounter the most amazing and indomitable landscape ever — the human spirit. But why do they do it? Why do they push their bodies (and their spirits) to the very brink? And just as importantly, what can their efforts teach us? Here are five lessons that I believe epic adventurers have for the rest of us:

1. Life Is all about transcending limits

“I like to do stuff that scares me,” admits Michael Wardian, who came in first and shattered all previous World Marathon Challenge records. Like many of his competitors, Wardian ran on behalf of a cause beyond himself. He’s raising awareness for the U.N.’s HeForShe initiative, which is dedicated to improving social equality for girls and women worldwide.

However, there is another reason Wardian seems to push himself to the limits of endurance. It has to do with growth, self-discovery and an innate drive to go beyond the known. As he explains, “If you’re not seeking things out that are challenging and difficult for you, then you’re not growing… So I hope maybe people see what I do, and say, ‘Okay, I want to do something different or try something new… I’m going to do something that scares me.’ That’s what I’m hoping people will take from it.”

So, don’t be afraid to push yourself. Testing your limits is how you discover what you are made of and what you are capable of. It’s essential to flourishing and feeling alive.

2. One person can inspire (and change) the whole world

In 1987, a woman named Lynne Cox became the first person ever to swim the Bering Strait, the frigid seas separating the Aleutian islands and Russia. Cox braved water temperatures so icy that there was constant danger she would experience hypothermia and go into immediate cardiac arrest at any point in her 2.7-mile swim. Indeed, experts believed even trained Navy Seals in wetsuits would not survive in such waters for more than 10 minutes. However, Cox endured the freezing temperatures without any special protective gear for more than two hours and 16 minutes.

Cox took on such a daunting challenge to help promote peace and understanding between the United States and the former Soviet Union. She has since swum the Suez Canal to encourage better relations between the Palestinians and the Israelis, the Ohio River to call attention the diminished water quality standards in the U.S. and in Antarctica to raise awareness of environmental issues.

Today, Cox’s swimming expedition in the Bering Strait is credited with helping to thaw relations between the two superpowers during the Cold War. Indeed, when President Reagan and Mikhail Gorbachev signed an INF treaty limiting ballistic missiles, the Russian leader raised a toast to Lynne by saying, “Last summer it took one brave American by the name of Lynne Cox just two hours to swim from one of our countries to the other. We saw on television how sincere and friendly the meeting was between our people and the Americans when she stepped onto the Soviet shore. She proved by her courage how close to each other our peoples live.”

No doubt, Cox’s extraordinary feats are proof positive that one person can make an enormous difference.

3. Most of our limitations are self-imposed (or imposed by others)

Impossible is a concept, not a real-life barrier. The three-minute mile, summiting Mt. Everest without supplemental oxygen, and hitting a basket from mid-court by throwing the ball from behind one’s back were all thought to be impossibilities — until someone did them. Most people resign themselves to the conventional wisdom. But a handful of extreme athletes and eccentric adventurers devote their lives to proving the naysayers wrong. In the process, they become beacons to others determined to overcome adversity and the odds.

4. Disability is not an obstacle — it’s an opportunity

Erik Weihenmayer is a mountaineer who has scaled some of the world’s most formidable peaks, including Everest. His climbing accomplishments are extraordinary — they include reaching the top of seven of the most challenging summits on the planet and a successful ascent of Losar in the Himalayas, a 2,700-foot vertical ice face. But what is equally remarkable is that Weihenmayer didn’t even undertake extreme adventures until after he began losing his sight in college.

Weihenmayer also founded a group called No Barriers USA, which is dedicated to helping people turn disabilities into opportunities. Some people in Weihenmayer’s position might say, “Why me?” But his attitude towards adversity is to use it as an opportunity grow in unforeseen ways.

5. The human spirit is the most powerful force on earth

Beck Weathers was left for dead near the summit of Mt. Everest. The Texas native had been attempting to scale the heights of the world’s highest mountain when disaster struck in the form of a horrendous blizzard. Frozen as a log, Weathers survived winds up to 100 miles an hour and frigid temperatures that dipped below -40 Fahrenheit as he lay exposed to the elements overnight.

Four other climbers perished that night. Most of Weathers’ fellow hikers assumed he was doomed, too, since his skin was frostbitten as hard as “porcelain” and the storm that evening precluded moving him.

However, something inside Weathers refused to give up or give in. As he recounts, “Somehow I regained consciousness — I don’t understand how — and was jolted to my senses, as well as to my feet, by a vision powerful enough to rewire my mind. I am neither churchly nor a particularly spiritual person, but I can tell you that some force within me rejected death at the last moment and then guided me, blind and stumbling — quite literally a dead man walking — into camp and the shaky start of my return to life.”

What matters is how you respond to life

Extreme athletes push themselves to the brink. Sometimes, life can push the rest of us to the edge too. But that’s very often where we can discover untapped reservoirs of ingenuity, grit and inner-strength. If we hang tough, then we often encounter moments of grace mixed in with the chaos and adversity.

Thoughts like that were on my mind when I reached out to someone I thought could tie this article together in a really insightful way. Coach Fred is a cancer survivor, an inspirational speaker and a devoted family man. He has battled terminal illness but also pursued epic adventurers like heli-skiing “at the top of the world” along the way. He’s a self-described ordinary guy who has accumulated some extraordinary wisdom as he’s wrestled with more than his share of adversity.

In a phone interview, I asked Fred about the qualities people need to surmount immense challenges. He mentioned that “attitude is everything and the only thing.” We can’t always master events or what happens to us, but “the one thing we can control is our attitude.” As he elaborates, “It isn’t what happens to you in life — it’s about how you respond to what happens to you” that matters most.

Fred honed in on many of the characteristics that allow epic adventurers and ordinary people to overcome extreme adversity. These individuals seem to find a “greater why” that becomes the guiding compass in their lives. They also have an outlook where every apparent stumbling block becomes a potential springboard to their goals. After all, as Fred observes, “If we only focus on the obstacles, we’ll miss the opportunities.”

“Keep Showing Up” is the name of the book Fred is working on. The title captures another quality that’s key to coping with adversity — simply showing up and giving it our best every single day to accomplish some meaningful and worthy aim. Extreme athletes make an impact keep because they put their hearts and souls into accomplishing a meaningful objective each and every day. That’s a lesson we can all apply to our lives.