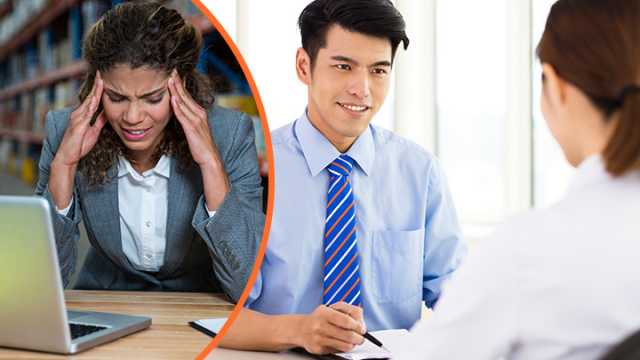 Ever wonder why some people have jobs they love and flourish in, while you, on the other hand, are stuck in a job you hate with a boss who devalues your worth? Monday morning rolls around and you’re miserable again, because you can’t stand your job. So, what’s keeping you there? Could it be that you’re carrying around a set of beliefs that are limiting your ability to act?

When I was in my late 20s, fresh out of college, I took the first job I was offered. No, it wasn’t in design, my chosen career. Instead, I dove head-first into ad sales where supposedly the money was — and I was miserable. My full-potential was wasted and I still found myself struggling to pay the bills. My mother had recently passed away and my father picked up and moved to another country. My mother’s last words to me were, “I’m not afraid of dying, I’m afraid of how you will survive when I’m gone.”

From that moment, I not only struggled with grief, but also with the belief that life wasn’t about being happy, it was about surviving. And for me, surviving meant remaining in a job I despised, working with people I didn’t care for — as long as I could pay my rent and put food on my table. Like many of us, I grew up hearing phrases like “life is hard,” or “you can’t depend on anyone.”

When a pattern of thoughts, phrases or messages from loved ones repeat over-and-over again in your mind, soon a belief is formed. Those beliefs direct you consciously or unconsciously through life. Your world is created by your beliefs, and those beliefs can either make you or break you. So, when it comes to being stuck in a job you hate, there is probably an embedded belief that’s keeping you there.

Here are three ways that limiting beliefs can keep you in a job you hate:

You forgot you have a choice

Sometimes we forget we have choices, and that our choices should never be dictated by others. But it’s easy to believe your choices are limited when you have a boss that intimidates you or devalues your contribution. And, let’s face it, he or she may be doing that, simply because he doesn’t want you to ask for a raise. I’ve worked for many employers who believe negative criticism breeds better employees. He or she may even see you as a rising star and secretly feel threatened by you.

While you can’t always control your environment, nor what others think of you, you can certainly choose how to respond. The problem is, due to your current circumstances (or negative talk from family and friends), you start to believe that this is your lot in life and that you really have no other choice. And that’s nonsense. You always have a choice. Simply start by changing that negative belief.

Did you know that your brain is actually wired for change? According to Dr. Athena Staik for PsychCentral, “Toxic thinking is self-perpetuating. It not only stimulates the body’s reward or learning centers with pseudo feel-good feelings, it also activates the body’s fear response, which further increases the likelihood that the defensive behaviors it triggers will be repeated.”

So, unless you set an intention to make conscious changes — like telling yourself that you alone dictate your choices — then there’s a good chance you’ll continue to hold onto your limiting beliefs.

I think, one of the big reasons people feel trapped in a job they hate is because they don’t believe there any better alternatives out there for them. Better the devil you know, right? That statement alone conjures up images of being shackled to a desk-job you despise, for eternity. And let’s face it, life is just too darn short. But the truth is, people resist change because they really haven’t used their creativity to seek out alternatives.

Tim Tyrell-Smith, marketing coach and career strategist suggests that seeking out alternatives can make you happier and even earn you some extra money. He suggests three alternative solutions:

Do you constantly beat yourself up and think no matter how much you do, or how hard you try, you’re just not good enough? When you’re constantly beating yourself up because of a belief system that probably developed in your childhood, it’s hard to move forward. However, “You must learn to dismiss the negative thoughts and stay open to other ideas that will help you move in a positive direction,” suggests Dr. Barton Goldsmith.

Start recognizing defeatist beliefs and use your mind to suppress them. Recognize that disappointment will always be part of life. Stop internalizing your disappointment and just figure out how to use it to get to the next level.

It’s time to believe in yourself

“A passionate belief in your business and personal objectives can make all the difference between success and failure. If you aren’t proud of what you’re doing, why should anybody else be?” — Richard Branson

Years ago, before taking that leap into freelance writing, I mentioned to a friend that I was actively writing a book and looked forward to it being published. She stared at me in disbelief and said, “You say that as if you actually know it’s going to happen?”

“That’s because I know it will happen,” I replied. “Why would I believe anything else?”