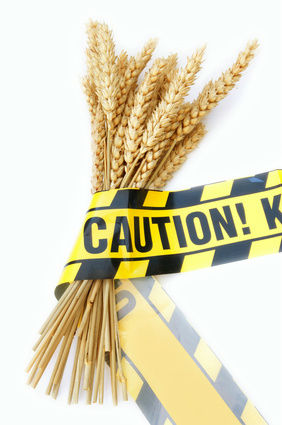 Celiac disease and other gluten related disorders are quickly growing health concerns in this country. Despite raised awareness in recent years, much is still unknown.

What is known. however, is that in the celiac or sensitive individual, even a tiny bit of gluten can wreak havoc on the digestive system, and potentially lead to serious ailments, including colorectal cancer.

‘Gluten’ is the term for a group of naturally-occurring proteins that are found in certain grains, mainly the three: wheat, rye and barley. These proteins function to give dough its elasticity.

Besides its presence in many bread and cereal products, gluten is often found in the majority of processed foods, sometimes under the ingredient label ‘flavor enhancer.’ It is also sometimes found in vitamin and pharmaceutical capsules.

An extreme sensitivity to gluten often manifests as an autoimmune disorder known as celiac disease. With celiac disease, gluten causes the body to release antibodies to attack its own intestinal tissues, which flattens the villi (tiny hairs that aid in digestion) on the intestinal walls and keeps the body from absorbing necessary nutrients.

Primary symptoms of celiac disease include digestive issues like bloating, diarrhea and cramps, which is why it is sometimes mistaken for irritable bowel syndrome (IBS). In addition, a significant percentage of celiac patients suffer non-intestinal symptoms, such as diabetes, lupus, and arthritis to name a few.

In fact, many celiac sufferers do not have intestinal symptoms at all. Celiac disease, especially if it is undiagnosed and gluten is still consumed by the individual, may lead to serious health conditions such as osteoporosis and cancers, including colorectal cancer.

Nearly 3 million people in the United States have been diagnosed with celiac disease. The scary thing, however, is that according to the National Foundation for Celiac Awareness, 83 percent of people in the United States who are living with celiac disease are undiagnosed or misdiagnosed. This means that these people are likely still eating gluten and making their condition worse with every passing day.

On top of that, between 30 and 40 percent of the United States population are living with various degrees of gluten sensitivity, also known as Non-Celiac Gluten Sensitivity.

This sensitivity does not trigger an immune system reaction like celiac disease does, however, in these individuals, gluten can irritate intestinal walls, cause depression, headaches, skin problems, abdominal pain and numbness.

These are just a few among the approximately 100 symptoms that have been associated with gluten sensitivities. Non-Celiac Gluten Sensitivity can also eventually lead to full-blown celiac disease if gluten continues to be consumed. Like celiac disease, it may also lead to a higher risk of certain diseases, including colorectal cancer.

At this point, much is yet to be researched about gluten sensitivities and how they are triggered. According to the Alliance for Natural Health, a gluten sensitivity can remain latent in the body for over 20 years.

With so much that is still unclear, now is the time to closely examine the role of gluten in our diets. Many people report feeling worlds better in as little as two weeks after getting rid of the gluten.

Centers for Disease Control (CDC) statistics report that in 2010, 131,607 new cases of colorectal cancer were diagnosed, and 52,045 individuals died from this cancer. Quitting gluten may help reduce the risk of developing this deadly disease (among others), as well lead to overall better health in the short term.

Don’t convince yourself that it is too difficult to stop consuming gluten. These days there are a lot of resources to help you get off gluten – and there are a lot of food alternatives to wheat, barley and rye in your neighbourhood grocery store.