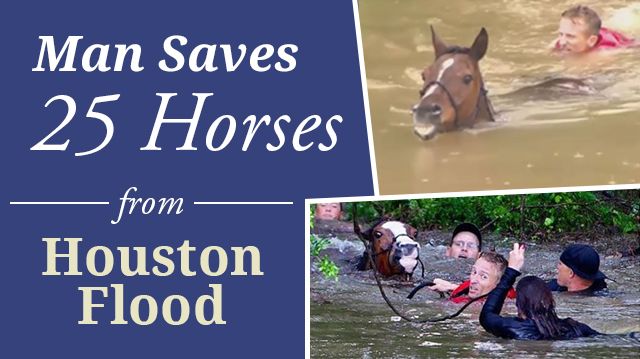 Like most people who have performed heroic acts, horseman Justin Nelzen, an endurance rider and trainer, doesn’t like being called a hero. The owners of the horses he saved surely disagree. When he heard that horses were caught in the floodwater on Monday, April 18, the Spring, Texas resident rushed to the site. Equestrian website Rate My Horse Pro quotes Nelzen as saying, “When I got there, immediately I noticed a horse was caught up in a fence and was in danger of drowning.”

An expert swimmer, Nelzen put on a red life vest and went into the water—below the surface were barbed wire, gates and brush, in addition to a strong current. People on dry land watched as Nelzen reached the horse and set him free. They then started shouting and pointing out other horses in the floodwaters. To save one animal, Nelzen had to rappel off a bridge to reach the horse in a raging current. He was able to drag the struggling equine over three logs and get him onto the shore. Other people also entered the water to help save horses.

Besides the horses he freed from the water, Nelzen helped rescue approximately 12 horses stranded in their barn at the equestrian center.

Unfortunately, not all of the horses caught in the floodwaters were saved. Nelzen said he saw some drown, while others washed away and their fate is unknown. Cypress Trails Equestrian Center was home to about 80 horses. One local stable owner said she witnessed a horse swept under a bridge that never reappeared. Another person at the scene said at least eight horses were known dead. It’s likely the full toll will not be known until the floodwaters recede and horses’ bodies are found. It was reported that the farm lies in a floodplain, and since the property has previously flooded and floods were forecast, it is not known why the horses were not evacuated prior to the rainfall. Harris County emergency workers saved many of the horses on the property by herding them onto higher ground.

Nelzen’s bio on his Team Equipro website focuses on a man on a constant quest for knowledge. Nelzen has extensively studied farriery, equine sports massage and endurance training, and has trained the top riders in endurance.

Nelzen coached his student Devan Horn, then 20, when she rode in the world’s toughest equine endurance race in 2014. That’s the 620-mile Mongol Derby, a race across Mongolia. Nelzen, a former US marine, had won the race in 2010, and he was also the first American invited to compete there.

The attention comes at a difficult time in Nelzen’s life. The single father of two kids—ages 12 and 13—needs a place to rent for his family and eight horses. He must leave his current farm because his landlord is moving in members of his own family. A GoFundMe account has been set up to help him get resettled.

CNN reports that at least seven people in the Houston area have died as a result of the flooding. Two of the victims drowned when they ignored freeway barricades and drove around them, according to the Associated Press. ABC Eyewitness News reporter Steve Campion rescued an elderly man caught in his vehicle on-camera.

Texas Governor Greg Abbott said emergency responders made over 1,000 water-related rescues. Half of the state remained under flood warning as of April 18. Some areas were hit with 17 inches of rain in less than 24 hours. At least 1,000 homes have been flooded and a minimum of $5 billion in damages have occurred. Schools and government offices are closed.