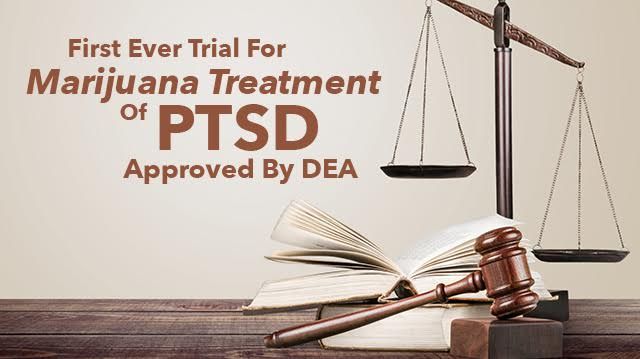 Marijuana might just be the next new thing for treating posttraumatic stress disorder (PTSD). The United States Drug Enforcement Administration (DEA), more popularly known for cracking down on drugs users and abusers, formally approved a randomized controlled trial of whole plant medicinal marijuana for treatment of PTSD in US war veterans. The drug trial, the first of its kind, was approved last month.

The clinical trial is sponsored by the Multidisciplinary Association for Psychedelic Studies (MAPS), and will document the effects of smoked marijuana on a group of war veterans who have been diagnosed with chronic, treatment-resistant PTSD.

With the blessing of the DEA, all other stakeholder agencies have approved the clinical trial, including the US Food and Drug Administration, the US Public Health Service, and the National Institute on Drug Abuse (NIDA). MAPS, a nonprofit organization whose purpose is to study and promote alternative medicine, has said that the study should begin later in 2016, following delivery of the medical marijuana from the NIDA.

According to MAPS, the trial will test the safety and efficacy of marijuana in treating PTSD in 76 US war veterans. The randomized, triple-blind, placebo-controlled trial is made possible by a grant of over $2 million from the Colorado Department of Public Health and Environment to MAPS.

The study will collect data from four categories of marijuana, based on different ratios of tetrahydrocannabinol (THC) and cannabidiol (CBD). MAPS hopes that the data gathered from these marijuana strains of varied potencies will generate important information relating to marijuana dosing, composition, side effects, and beneficial applications for doctors and health experts to effectively treat cases of PTSD.

“This study is a critical step in moving our botanical drug development program forward at the federal level to gather information on the dosing, risks, and benefits of smoked marijuana for PTSD symptoms,” stated Amy Emerson, executive director and director of clinical research of the MAPS Public Benefit Corporation. “We are thrilled to see this study overcome the hurdles of approval so we can begin gathering the data.”

While there is a growing body of scientific evidence to support claims that marijuana could have a strong beneficial effect on PTSD patients and a range of other disorders, the US Department of Veterans Affairs (VA) continues to prohibit doctors from prescribing marijuana to patients even in states where medical marijuana use has been legalized. The VA states on its website that “controlled studies have not been conducted to evaluate the safety and effectiveness of medical marijuana for PTSD.” The MAPS study aims to do just that, and could enable thousands of military veterans to gain access to this underutilized PTSD treatment.

Already a believer in the healing powers of medicinal marijuana? Find out how you can determine whether the marijuana you buy is toxic or from organic farms.