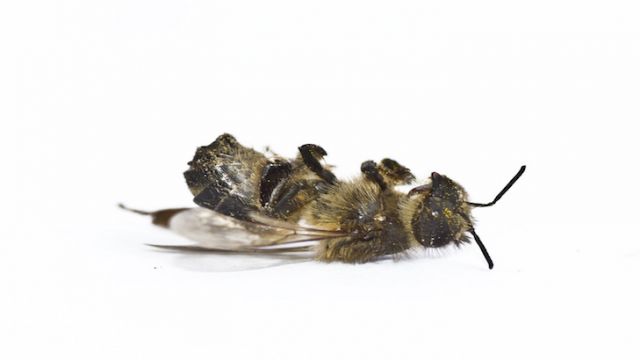 Honeybees are among the most fruitful and amazing creatures. Though their brains are fairly small, they engage in a complicated geometric “waggle dance” to communicate the location of food sources to members of their hive. As pollinators, they play an indispensable role in sustaining crop production and the food chain.

In the last decade, however, mysterious declines in bee populations across the globe has alarmed scientists, who are deeply concerned that the loss of this critical species could signal a catastrophic collapse in the biodiversity our planet’s ecosystem depends on. Mass extinction of the honeybee, many experts believe, should be viewed as something like the proverbial canary in the coal mine — a harbinger of even greater perils.

Scientists first noticed bees were dying at an alarming rate about 10 years ago. In fact, the number of hives has declined by about 42 percent in just the last five years. The precise cause of the depopulation of bees remains unknown. Many wildlife experts have implicated a parasitic varroa mite, viruses, malnutrition and climate change as possible culprits. However, neonicotinoids — a class of neuro-active insecticides chemically similar to nicotine — is known to be severely toxic to the bee’s nervous system.

In April 2016, the European Union approved restrictions on neonicotinoids. On May 31, Maryland followed suit, becoming the first state in the United States to ban pesticides that have been shown to harm bees, butterflies and many species of birds.

The pesticide ban has proven controversial both in Europe and here in the United States.

Not surprisingly, agribusinesses, chemical companies and pesticide manufacturers remain vehemently opposed to the restrictions and they have engaged in vigorous lobbying efforts to defeat the bans.

In particular, industry interests have insisted that neonicotinoids are safer for humans than previous generations of pesticides and that data implicating them as a danger to bees is insufficient. Nevertheless, a report by the European Food Safety Authority recently concluded that the family of neonicotinoids banned — including clothianidin, imidacloprid and thiamethoxam — pose a “high acute risk” to pollinators such as bees.

Environmental groups have hailed the outcomes in the EU and Maryland. In Europe, more than three million signatures were collected in support of the neonicotinoid moratorium. Greenpeace’s Marco Contiero said the EU’s vote “makes it crystal clear that there is overwhelming, scientific, political and public support for a ban.”

In the United States, Maryland Governor Larry Hogan (R) announced that he will not veto legislation banning the consumer use of neonicotinoids. The law, scheduled to take effect in January 2018, is the first of its kind in this country.

A spokesperson for the governor, Shareese DeLeaver-Churchill, explained that Hogan will not actually sign the bill. Instead, it will automatically become law if the legislation is not vetoed with 30 days of leaving the legislature. Presumably, the state’s chief executive is worried that special interests might run negative ads if he lent his signature to the bill. Nevertheless, his office said the governor “recognizes how devastating the recent honey bee losses are to beekeepers and how vital pollination services are to fruit and vegetable crop production throughout the state.”

The Smart on Pesticides in Maryland Campaign, which represents a coalition of environmental groups in the state, has hailed the legislation as an important precedent in the US. However, the bill only applies to consumer use and contains a number of exemptions for certified applicators, veterinarians and farmers.

Neonicotinoid pesticides were first developed about 25 years ago. At first, scientists believed they were safer than previous types of insecticides. However, neonicotinoids are applied directly to seeds. Consequently, the developing plant or crop becomes toxic to insects. About 94 percent of all seeds used in the United States have been treated with a neonicotinoid-type pesticide.

Scientists disagree on the impact of neonicotinoid on bees and the wisdom of banning it. Laboratory testing has shown a clear cause-and-effect relationship between the pesticide and bee health. As Dr. Geraldine Wright from Newcastle University in the UK notes, “There is an effect of these pesticides on bees brains, [and] their behavior.”

However, results in field studies have proven less conclusive. Indeed, many researchers believe that while neonicotinoids are a factor, they are not the primary one. For example, some experts point out that varroa mite and malnutrition are far more significant when it comes to undermining the bee population. According to Dr. Adam Vanbergen, at the Centre for Ecology and Hydrology in the UK: “Neonicotinoids are not the smoking gun.” Dr. Vanbergen worries that banning the pesticide will encourage farmers to adopt more harmful chemicals.

Ironically, the threat to the bees has engendered some short-term fixes that have only compounded the problem. For example, chemical manufacturers such as Dow, Monsanto and Bayer developed genetically modified herbicides — made in response to parasite danger — that appear to have weakened the immune system of bees. Further, experts believe that the agribusiness practice of feeding bee colonies with high-fructose corn syrup has undermined their digestive systems, making them more vulnerable to parasites and viruses.

The demise of the bees is one of the most serious and urgent mysteries humankind is facing. The Centre for Research on Globalization notes no nonhuman creature has a greater impact on the production of fresh fruits and vegetables than the humble bee. Indeed, the loss of honeybees would pose a direct threat to the survival of the human species itself. As Albert Einstein, the most brilliant scientist of the twentieth century, noted, “Mankind will not survive the honeybees’ disappearance for more than five years.”

However, not all is doom and gloom. Programs that teach urban residents to become beekeepers are taking root. And the United States Department of Agriculture is making efforts to coordinate information sharing between farmers and beekeepers, which should encourage crop practices better suited to bee health. In short, through improved awareness, humanity can take steps to assist a species that is vital to the future of our planet and the human race.