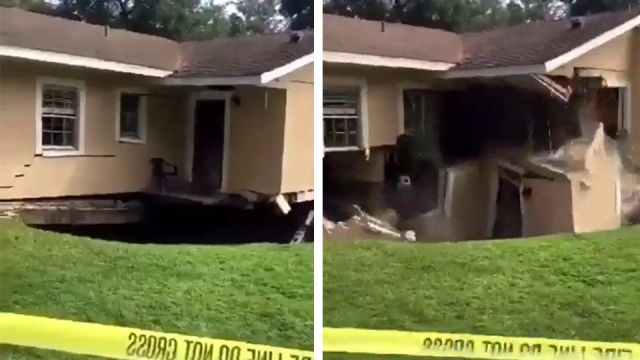 While this home in Apopka Florida may have been spared the brunt of Hurricane Irma, home owners were shocked when a sinkhole began to gobble up their dwelling.

Ellen Miller, the homeowner, was shocked. “I wasn’t sure what all the sounds were until I got up and saw the big, huge cracks in the walls, and they were just enormous,” she said. The sinkhole swallowed up the kitchen, den and a bathroom before things settled down.

According to the Miller’s daughter, many generations of belongings were lost to the sinkhole including her father’s Bible and a flag from her grandfather’s casket. Sadly, these are things that cannot be replaced.

The family noticed the home cracking the night before the sinkhole opened up and sucked their house downward. One family member saw large cracks in the bathroom and noticed the tub was sinking and the windows were coming loose. The family evacuated the home at this time. Unfortunately, all they could do was watch as a 25-foot by 15-foot sinkhole swallowed up part of their home.

Sadly, the family has lost their home and many precious belongings. The good news is that no one was injured.

Did hurricane Irma spark the sinkhole?

Authorities say that they cannot rule out Irma having something to do with this sinkhole. Other sinkholes have appeared in the same area and to the south. After Hurricane Harvey, sinkholes appeared in Texas as well.

The 3900 block of FM 762 (in front of 24 HR fitness) has just collapsed. There is a massive sinkhole in the roadway. AVOID THE AREA! #Harvey pic.twitter.com/BJreUS1D9C

Florida is no stranger to sinkholes and has more than any other state, most likely because of the massive amount of rain that the state gets.