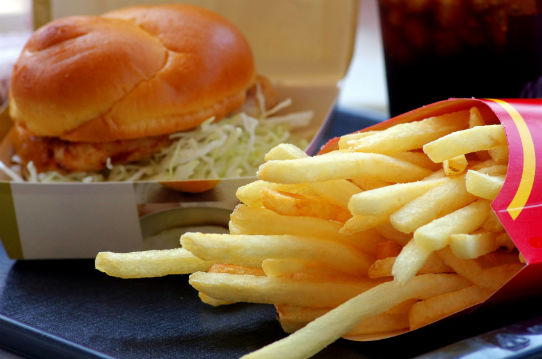 In a significant and surprising announcement that shook the food world, McDonald’s has announced that they will phase out chicken raised with antibiotics that are “important to human medicine” within two years in the US.

McDonald’s, which is the world’s biggest restaurant chain, will be joining fast food competitors like Chick Fil-A, Chipotle, and Panera in implementing a policy against serving chicken raised with antibiotics.

Although many are suspicious of McDonald’s (and rightly so), this announcement truly is big deal for food safety and public health. If the recent superbug outbreaks have taught us anything, it’s that antibiotic-resistant infection is an imminent and dangerous threat to human health, and the use of antibiotics in livestock plays a big role in this problem.

In fact, approximately 80 percent of total antibiotic sales in the US are used in livestock, 25 million pounds of which are used for non-medical reasons like making animals grow faster.

And who is to thank for such an enormous step in the right direction? Consumer demand and pressure on the industry! According to McDonald’s U.S. President Mike Andrews:

“Our customers want food that they feel great about eating — all the way from the farm to the restaurant — and these moves take a step toward better delivering on those expectations.”

Unfortunately, McDonald’s chicken will still not be completely antibiotic-free.

It’s important to note that the new policy does not actually mean that there will be no antibiotics in chicken products from McDonald’s. In their announcement, McDonald’s made an important distinction.

Although the company will stop selling chicken given antibiotics that are “important to human medicine,” they will continue to use chickens which have been given ionophores,“a type of antibiotic not used for humans that helps keep chickens healthy,” according to the announcement.

While many farmers in the industry claim that ionophores have no affect on human antibiotic resistance because they are not used to treat humans, some studies have suggested otherwise. A study by scientists from the USDA and Cornell University, for example, showed that one of the most commonly used ionophores in cattle production in the U.S., called monensis, resulted in a 32-fold increase in resistance to the antibiotic bacitracin, which is used to treat humans.

And that’s not the only problem with McDonald’s chicken. As we’ve covered before, McDonald’s chicken nuggets are full of sugar, gluten, MSG, a whole host of ‘natural flavors’ which are anything but, along with other synthetic preservatives and texture enhancers. Although their chickens will no longer be pumped with as many antibiotics, the conditions that they’re raised in are still abhorrent in other ways. So, the announcement absolutely does not mean that McDonald’s should be on yours or anyone else’s menu anytime soon.

The most important take away from this is that consumer demand and pressure is driving even the largest, most unhealthy companies to change their practices. McDonald’s profits are down a whopping 30 percent from a year ago, most likely a result of more attention being brought to the appalling ways they make and source their food.

Let’s make sure we keep supporting businesses that promote healthier people, animals, and environments, and call out and refuse to buy from the ones who don’t!