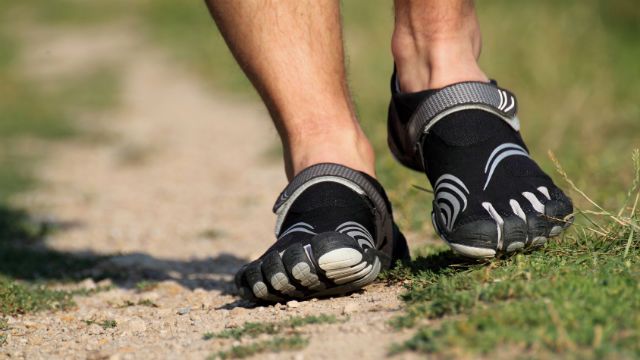 As if runners didn’t don enough interesting apparel these days (i.e. fluorescent-colored compression socks, hydration belts, arm sleeves, GPS devices and even nipple bandaids, to name just a few), you may have noticed that some of these die-hard running fanatics are pounding the pavement wearing nothing more than a slip of a shoe, or one that resembles what some call a “foot glove.”

While you may brush it off as just another “crazy runner trend,” minimalist running shoes are all the rage. And while definitely a conversation starter, these glove-like shoes may be the most natural footwear we can lace up.

As a species, humans were born to run. From the earliest of times we ran everywhere, for our food, seeking shelter and from enemies. We followed the weather patterns and herds, remaining in one location for only very short bouts.

In fact, it is far more natural for us to run than it is to sit at a desk all day. And really, up until the 1970s we ran a fair amount, mostly donning nothing more than minimally cushioned slip-on shoes if anything at all.

But as the long-distance running craze swept over the nation, so did the evolution of bigger and better shoes. Today, runners will pay an upwards of 150 dollars per pair, which they may blow through in a few weeks if they log longer mileage. But are these pricey pairs worth it, and could they possibly be causing more harm than good?

According to research from Harvard University, runners who don shoes tend to strike the ground heel first as opposed to with a midfoot or forefoot strike. Researchers suggest that forefoot and midfoot striking is far more natural and may reduce the likelihood of injury.

One study concluded that every year, some 30 percent of runners suffer injuries, mostly of the foot or lower leg, while another study found that 75 percent of shoe-wearing runners land heel first as opposed to the more natural strike of midfoot or forefoot.

So is this heel striking really a problem? Proponents of minimalist running believe the repetitive stress placed on the body by the more unnatural landing pattern contribute to a majority of injuries runners face today.

One study in particular tested 35 subjects, having them complete two four-minute bouts of running, once wearing traditional running shoes and once again going barefoot. Results indicated that barefoot running reduced the mechanical stress placed on the body during the repetitive act of running due to the more natural foot strikage.

While many runners have been tempted to experiment with minimalist running, many are still leery of abandoning their tried and true brand of running shoe, and with good reason.

Most of us aren’t living as our ancestors did, running through the grasslands barefoot for hours on end. Our feet have been well-protected since we could barely crawl, and suddenly pounding the pavement (or even walking) barefoot or in minimalist shoes can lead to a whole host of new injuries.

While minimalist shoes provide some protection, the lack of a sole or any semblance of cushion leaves you at a greater risk for suffering cuts or scrapes from debris, or other hazards you may encounter such as rocks, branches or thorns on trail runs. And many runners who aren’t injury-prone find little reason to change.

There are several pros and cons to minimalist running shoes, and experts on boths sides agree that more research needs to be conducted before they can say which way is the “right” way to run.

In fact, makers of FiveFingers running shoes, Vibram, are in the process of settling a class action lawsuit against them for making unsubstantiated health claims regarding their shoes. The company has agreed to pay $3.75 million in claims to people who have purchased their shoes as far back as 2009.

If you’re still interested in trying out this latest running trend, here are a few things to consider:

Minimalist running may not be for everyone, but if you’re injury-free and looking to improve or change your footstrike, going sans the shoes may be worth a try.