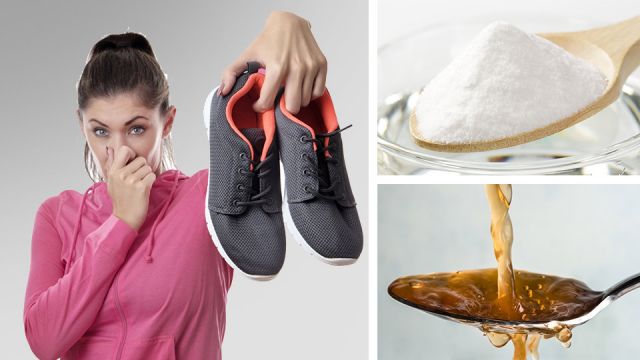 You’ve just got back from a long run. You’re tired and sweaty, and plonk down on the couch with a glass of water and a banana to reap the rewards of a temporarily guilt-less conscience. Off come the shoes, up go the feet onto the arm of the couch, you prepare to lie back for a well-deserved nap… and all of a sudden a horrendous aroma reaches your nostrils.

It smells like a cross between that four-day-old steamed broccoli you’ve been too lazy to throw out and an old block of cheese. Not wanting anything to spoil your nap, you investigate. A few sniffs and the culprit is located: it’s coming from your shoes!

Not only is the smell ruining your post-run relaxation time, it also has you baffled: you just bought these shoes! How do they already smell just as bad as your old pair of runners?

Regardless of the reason behind your pervasive shoe odor, there’s plenty of easy, natural hacks for killing the odor without a trip down to the supermarket (or wherever it is that a person buys deodorizing shoe powder). Here are five ways you can banish the shoe smell, and get back to your nap ASAP.

There’s a reason why baking soda is the number one natural hack for killing shoe odor: it works like a dream! You may have heard about how some people leave an open container of baking soda in their fridge to absorb any odors that seep out of food. The same approach can be used in your shoes as well!

The key to baking soda’s anti-odor properties is its amphoteric abilities. This means it can react with both strong acidic compounds and gases and strong basic (alkaline) compounds and gases. These are typically the source of really strong odors, meaning when it comes into contact with these odors it generates a reaction that neutralizes the source of the smell.

It’s not exactly rocket science, but it’s still pretty technical. All you need to know, however, is to sprinkle a small amount of baking soda in a stinky shoe and let it neutralize the odor overnight. In the morning, shake out the used baking soda from the shoe and you’ll be good to go…just be sure not to use the smelly baking soda in your next batch of muffins!

Regular Alternative Daily readers won’t be overly surprised to see this one on the menu — you can use apple cider vinegar for just about anything, it seems!

And just like apple cider vinegar is a powerful superfood and natural medicine, so too is it an impressive deodorizer. Whether it’s due to the beneficial bacteria and yeasts present in ACV or the strong concoction of acids is anyone’s guess, but apple cider vinegar rubbed onto the inside of a smelly shoe works wonders.

Simply dab some raw apple cider vinegar onto a cotton ball and dab all around the inside of the offending shoe. Do this two to three times a day until the odor begins to fade… don’t go overboard on the ACV, as too much dabbing and you could have a shoe smelling like vinegar instead of old broccoli!

Essential oils are an excellent nature shoe odor killer as many have been proven to wipe out a wide range of pathogenic microorganisms… including those known to cause a smelly shoe!

Three such oils are cinnamon, thyme and clove. Thyme essential oil, for example, has been shown to exhibit strong antimicrobial effects against several Salmonella and Staphylococcus species. Another study showed that both clove and cinnamon essential oils have strong antimicrobial abilities, particularly against fungi commonly found in bread products. Surely, between the three of them, you can get those pesky shoe odors under control!

The simplest method would be to put a drop of each essential oil onto the sole of a smelly shoe. Over time, the volatile compounds in the essential oils would help to neutralize the smell by killing off the bacteria that cause those smells in the first place. Another faster method is to mix a teaspoon of a carrier oil like coconut oil with three drops each of thyme, cinnamon and clove and then use a cotton bud to swab the oil mixture all around the inside of the shoe. Then, leave the cotton ball inside the shoe and close the mouth of the shoe off for the night — such as by wrapping the shoe in a plastic bag.

The next morning, gingerly unwrap you smelly shoe and, hopefully, the smell will be completely gone! Aside from a pleasant aroma of thyme, cinnamon and clove, that is.

Now we’re really getting funky. For those of you who have a house cat but are low on baking soda, there’s an easy alternative: kitty litter! Just as kitty litter is designed to absorb the pungent aromas hiding out inside your cat’s litter box, so too can this litter be utilized to soak up the odors from your stinky shoes!

For best results, fill the offending shoe with kitty litter and leave it overnight or as long as you can. Then simply dump out the litter (you could probably reuse it in your cat’s litter box, but don’t do it the other way around), upend the shoe and give it a few taps to dislodge any stubborn bits and dust, and you’re away laughing!

Similar to essential oils, lemon juice contains natural volatile compounds that make it the sworn enemy of most odor-causing bacteria. To make a natural odor-killing rub, squeeze the juice of half a lemon into half a cup of water and use a cloth or cotton ball to swab the mixture onto the inside of your shoe once or twice a day. Within a few days, the odor should have become a distant memory, to be replaced by a fresh mild lemon scent. Success!