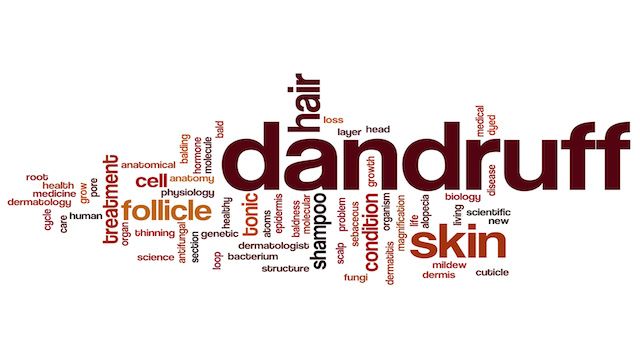 There are few things more embarrassing than looking down at your shirt and seeing that your shoulders are covered in white flakes. Dandruff is a major social faux pas, plus it’s a total turnoff.

An itchy scalp can also be highly uncomfortable, and even painful, as it becomes red and irritated. These are conditions that everyone wants to avoid, but many people suffer with.

So, a little pop quiz: What’s the cure for dandruff? Was the name of a popular, highly marketed shampoo the first thing that popped into your head?

If so, that’s no surprise. The mainstream health and wellness industry is chock full of treatments like these, which provide short-term relief. But did you know that dandruff shampoos don’t actually address the root cause of dandruff?

Many people think that dandruff is a result of dry skin, since it is most common during the winter. Perhaps cold weather, dry indoor air from central heating, and wearing hats cause a flaky scalp.

In truth, dandruff thrives in oilier skin environments. This is because dandruff is actually caused by an overgrowth of a fungus called Malassezia furfur. Another name for this condition is seborrheic dermatitis. If you dissect this name, it indicates an inflammation of the skin in connection with the sebum glands.

Similarly to candida yeast, malassezia is always living on the surface of our skin to some extent. However, certain conditions allow it to grow out of control and cause skin problems. Malassezia yeast uses the fatty acids in sebum, which is the waxy substance produced by our skin.

Sebum is the protective barrier produced by the sebaceous glands, which are found near hair follicles all over the body. There are more sebaceous glands, and thus more sebum, in areas with more hair. That’s why the redness and flakes of dandruff can arise on the head, but also in other areas, like the folds of the nose, the armpits, the groin or the belly button.

Malassezia congregates around these sebum-rich areas where it consumes specific saturated fatty acids and leaves behind unsaturated fats. These modified unsaturated fats are irritating and pro-inflammatory to the skin. This is what we see in a full-blown case of fungal overgrowth causing flaking and dandruff.

So why would this yeast overgrow? All of us have our own individual microbiome, which is like a bacterial ecosystem made up of the billions of microorganisms that live on and in our bodies. This consists of many different species, which ideally coexist in a safe and healthy balance.

You might have heard how 70 to 80 percent of your immune system resides in your gut, and is supported by the friendly bacteria that live in your intestines. When the microbiome is out of balance and the immune system is compromised, opportunistic species like malassezia yeast can grow out of control. There aren’t enough good bacteria to fight them off when the immune system is weakened.

The microbiome functions as a whole, so that’s why treating dandruff locally with a product like a steroid cream or antifungal shampoo will not actually fix the problem. If the immune system is not functioning properly, the yeast will continue to overgrow and the dandruff problem will perpetuate.

Not only do commercial dandruff products not address the root cause, they can also be highly toxic. Shampoos and personal care products are rife with chemicals such as sulfates, phthalates and parabens, which have been shown to exert many negative effects, including accumulation in human organs and disruption of hormone balance. Clearly these are best avoided, since there are so many natural alternatives.

It follows then, that the true solution for the fungal overgrowth, which causes a red, itchy scalp and dandruff, lies not in a band-aid pharmaceutical solution, but rather in supporting the immune system.

You may have noticed that dandruff is most common in the winter. This is in line with many other common illnesses, such as colds and flu, which we all seem to succumb to in the colder months. Scientists theorize this is all due to an impaired immune system as a result of lower vitamin D production during the winter. 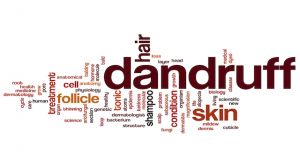 Other causes of impaired immunity during the winter might be the unhealthy seasonal consumption of food and alcohol, the shock of cold weather, or the stress from a frenzy of activity over the holidays. All of these can result in damage to the microbiome and a decreased ability to fight off nasty bugs, whether it’s strep bacteria, flu virus, or simply the yeasts that are always present on the skin.

In order to prevent opportunistic and pathogenic bacteria from taking over, we have to adopt lifestyle and diet practices that support friendly bacteria so that the system stays in balance. When friendly bacteria are thriving, they are able to keep the harmful ones at bay, and all of the species coexist as they should.

We can use a combination of natural techniques on both the inside and outside of the body to help support the immune system and bring the microbiome into balance.

Nutritional recommendations to get rid of dandruff

Probiotics
Consuming friendly bacteria — either in the form of probiotic supplements, or fermented and cultured foods — has been found to greatly assist in overcoming dandruff. One study found that symptoms were reduced by 70 percent after a month of probiotic use. Increasing the levels of friendly bacteria in the gut will help keep those opportunistic strains like malassezia well under control.

Prebiotics
It’s important to note that just consuming the good bacteria isn’t enough. We should also foster their ability to take up residence, or colonize, our gastrointestinal tract by providing them with their preferred food sources. This is where fibrous and starchy foods come in.

These are called prebiotics because they lay down a good environment for the probiotics to come in and colonize. Good sources of prebiotics include green bananas and plantains, potato starch and chicory root. Breast milk naturally contains high levels of prebiotic, which are considered to be vital in developing the microbiome of newborns.

Eating foods high in prebiotic fiber helps ensure that those friendly bacteria will continue to grow and keep your immune system running well.

Omega 3s
It has been suggested that the types of fat you consume can affect the prevalence of dandruff. The rampant imbalance of omega-6 versus omega-3 fatty acids in the standard American diet is commonly blamed for causing increased inflammation and many ailments.

Since malassezia lives on fats from the skin, it makes sense that adjusting dietary intake toward healthier fats could improve this condition. Omega-3 fatty acids can be consumed from flaxseed oil, walnut oil and cold-water fish, such as salmon, sardines and mackerel. Omega-6 fats should be minimized, since they are already overly common in the average western diet. Omega 6s are common in oils such as soy, corn, canola, sunflower and safflower.

Coconut oil
Coconut oil has many amazing properties, including the ability to fight viruses and bacteria. Consuming coconut oil and also applying it topically could help foster healthy balance in the microbiome both in the gut and on the skin’s surface.

Surface treatments for dandruff
While it’s important to encourage internal bacterial balance, we can also use topical treatments to reduce the symptoms and signs of dandruff.

Holistic health practitioners commonly recommend using a hair and scalp rinse containing natural antifungals to reduce the growth of opportunistic bacteria. Add a small amount of any of the following substances to two cups of water and use on the affected areas to help sooth itching and flaking. And don’t hesitate to experiment, since they will interact differently with each individual’s microbiome:

A 2001 study found that itching and scaling were relieved within one week with the use of raw honey, and skin lesions disappeared within two weeks.

Don’t hesitate to use a diluted version of any of these natural treatments all over your skin, not just your scalp, since the microbiome is over your entire body. It may seem kind of gross, but it’s amazing what these little bacteria can do!

Now that you know what’s really behind dandruff, get to work making friends with those good bacteria. You can set them to work for you to prevent all types of health conditions. Relieving dandruff is just the beginning!

Liivi is an Integrative Nutrition Health Coach and is training to become a doula. She inspires women to find peace and personal power by taking control of health and fertility naturally. Liivi‘spassion is ancestral nutrition and primal lifestyle design. She and her partner Will live between Toronto, Canada and Queenstown, New Zealand.