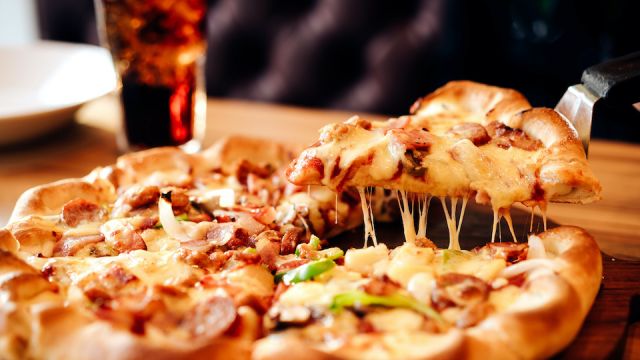 Sometimes the foods you enjoy the most are the worst foods for your body — especially when combined. Actually, combining any foods that are high in fructose corn syrup and refined carbs is incredibly bad for your health and may lead to obesity, diabetes, heart disease, and more. Here are two foods you should never eat together.

Pizza and soda may seem like a match made in heaven, but in reality, it’s a match made in hell — for your health. Before you roll your eyes, let’s look at the food facts behind this controversial topic. To understand why pizza and soda are so bad for you when combined, let’s first look at each “food group” to see what it’s doing to your body.

The problem with simple carbs

Simple (or refined) carbs include sugars and refined grains that have been stripped of all fiber, bran, and nutrients. The higher the simple carbs in your food, the poorer the nutrient quality. Pizza dough, often made with white flour, is a simple carb along with white bread, pasta, white flour, white rice, many breakfast cereals, and pastries.

Soda, incidentally, is a simple carb as well.  When you eat foods containing carbs, your digestive system breaks down the digestible ones into sugar, which enters the blood. As your blood sugar rises, your pancreas produces insulin. And, as blood sugar is absorbed by cells, levels in the bloodstream fall. To remedy that, the pancreas makes glucagon, a hormone that tells the liver to begin releasing stored sugar. Problems arise when the body can’t make enough insulin — or can’t use the insulin it makes.

Here’s a hard truth to swallow: The more high-sugar soda you drink, the higher your risk of premature death, according to a study from Harvard T.H. Chan School of Public Health. The large, long-term study, which included both American men and women, found that sugary sodas, along with other high-sugar beverages increased risk of death from cardiovascular disease and even cancer.

High fructose corn syrup (HFCS,) a byproduct of corn, was first presented to the food and beverage market in the 1970s.  Experts believe that added HFCS in today’s processed foods is the key to the obesity epidemic, as well as the serious health issues that plague Americans, like type 2 diabetes and metabolic syndrome. Apart from contributing to heart disease and diabetes, one study found that overweight men and women who drank sweetened soda for six months significantly increased their liver fat. HFCS also contributes to the deadliest type of fat, visceral fat, which surrounds the organs.

If you’re looking for a reprieve on sugar-free soda, think again. Not only are there rising doubts about diet sodas’ ability to help people lose weight and avoid diabetes, it may also contribute to the development of metabolic syndrome. Metabolic syndrome is a condition that often heralds or accompanies diabetes and includes several conditions such as excessive belly fat, high blood pressure, elevated triglycerides, low levels of “good” HDL cholesterol, and elevated blood sugar. In addition, diet sodas may actually increase your desire for sugar.

Drinking sugary soda with a protein-rich meal pushes your body to store fat, according to a study. It seems that sugary drinks reduce fat oxidation. What’s fat oxidation? It’s the fat burning process that uses fat instead of carbs as fuel. So, when you’re eating pizza loaded with cheese and meat, the process that begins to breakdown fat decreases. Additionally, more protein on your pizza, means the further fat oxidation decreases. And if that’s not enough, researchers found that combining a sugar-sweetened drink with a high-protein meal also increased the study participant’s desire to continue eating salty and savory foods for hours after eating. So, not only will you burn less fat, but you’ll also start craving more salt — and probably find it in a bag of chips. While the study was relatively small, it does showcase how the “American” diet may lead to obesity.

A diet high in acid-producing foods like pizza and soda can negatively affect your health. In addition, it will cause acid in your urine, allowing uric acid stones to form. It’s also thought that too much acidity may cause bone and muscle deterioration. In fact, evidence suggests that phosphoric acid, often found in dark sodas like Coke and Pepsi, contributes to decreased bone density. Too much acidity in your diet is also linked to an increased risk of heart disease, liver issues, and even cancer.

By the way, pizza includes some of the highest acid-producing foods, including tomatoes and cheese. And When it comes to soda, short of drinking undiluted vinegar, soda is probably one of the most acidic beverages you can consume. But giving up soda is extremely hard. Cola companies know what to do to keep you hooked. Ingredients such as caffeine, high amounts of high fructose corn syrup, and very acidic pH, make it especially hard for many people to kick the habit.

Eating too many high-glycemic-index foods like pizza and soda creates powerful spikes in blood sugar. This leads to an increased risk of heart disease, type 2 diabetes, and weight gain. Research also suggests that high-glycemic diets are linked to age-related macular degeneration, ovulatory infertility, and colorectal cancer.

No one is telling you to stop eating pizza and drinking soda all together. Pizza and soda are two highly addictive foods that, when combined, wreak havoc on the body. Limit how often you consume these foods and eventually make healthier choices. Save the soda for an occasional treat and drink water with your pizza. Never allow marketing hype to dictate your food choices. “They” certainly don’t have your best interest at heart.