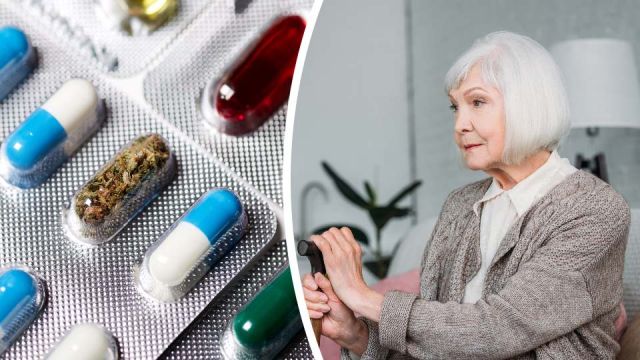 Cannabis-based medicine appears to be taking healthcare to a higher level. In recent years, an emerging body of evidence has discovered that the plant-based remedy can help alleviate epileptic seizures, the acute anxiety associated with PTSD and the abdominal pain and bloating linked to irritable bowel syndrome (IBS).

New evidence that compounds in cannabis help patients with Alzheimer’s

Now, additional research suggests that a certain type of medical marijuana may help improve the lives of patients suffering from Alzheimer’s. No, pot is not a miracle cure for dementia. But according to a new study the antioxidant, anti-inflammatory and stress-busting compounds in cannabis appear to lessen many of the symptom associated with Alzheimer’s such as agitation, insomnia, depression and anxiety.

One of the lead authors of the new research, Dr. Krista Lanctot, a professor of psychiatry and pharmacology-toxicology at the University of Toronto, explained the significance of the findings by saying, “We’re excited because we think this opens a whole new door for cannabinoids as a group for treating agitation in Alzheimer’s disease.”

The University of Toronto study actually involved a synthetic form of marijuana called Nabilone, which is supposedly easier to dose, regulate and administer than plant-based products. Nabilone capsules are already approved by the FDA to treat nausea and vomiting caused by chemotherapy.

The scientists investigating the use of Nabilone for treating Alzheimer’s patients hope that larger clinical trials will convince regulators to approve the cannabis-based medication for dementia.

Currently, the FDA has not OK’d any medications to specifically treat the anxiety, agitation and insomnia that many Alzheimer’s patients experience. As a result, physicians and nursing homes tend to dispense off-label drugs to treat these symptoms.

Sadly, these are often anti-psychotic pharmaceuticals with very severe side effects such as apathy. These drugs have also been linked to an increased risk for stroke and sudden death. Understandably, watchdog groups believe these interventions benefit pharmaceutical companies, physicians and care facilities at the expense of the vulnerable elderly who are being warehoused.

Increasingly, cannabis is attracting interest to treat a host of cognitive disorders. In particular, researchers have found that cannabis contains a host of anti-inflammatory and neuroprotective compounds, which can help reduce oxidative stress that underlies cognitive decline and many other chronic diseases.

Contrary to the discredited anti-marijuana hysteria of yesteryear, which tried to link pot to brain damage, researchers have found that compounds in marijuana actually promote a process called neurogenesis, which entails the production of new nerve cells. Consequently, cannabis-based medicine is being explored for treating:

Neuroscientists caution that there is no drug (including cannabis) that has been shown to reverse dementia. But Dr. Lanctot and others believe that Nabilone and other forms of cannabis-based medicine may help prevent further neurons from dying, which should improve the quality of life for dementia patients. In addition, unlike psychotropic medication, the new study found that Nabilone was well-tolerated, safe and effective for the patients who took it.

What is synthetic marijuana?

The term “synthetic marijuana” can often generate fear and confusion. Recently, public health officials have warned about the dangers of “fake weed” which refers to plant material laced with chemicals designed to mimic the psychoactive ingredients in marijuana. In fact, these black market products (known as spice, K2 and black mamba) are manufactured by criminal enterprises and have been linked to numerous deaths and severe medical complications.

Since 1985, however, the FDA has approved pharmaceuticals that are bioidentical to the THC and other active ingredients in marijuana. These drugs, which are marketed under names like Dronabinol and Nabilone, are manufactured synthetically in the lab by government approved drug makers.

Advocates of these legitimate products insist that they are the best form of medical marijuana because they meet stringent requirements for dosage and purity. However, numerous alternative practitioners believe that plant-based marijuana is superior because it is more natural. They also contend that the wide range of compounds in the plant matter itself provides synergistic effects that you can’t get with manmade medications.

This debate is likely to continue. However, everyone agrees that the kind of unregulated synthetic weed sold on the streets can be very dangerous. There’s also growing agreement that some form of cannabis-based medicine appears to offer therapeutic value in treating patients with neurological and cognitive conditions (including dementia).

Of course, when it comes to an all-encompassing degenerative disease like Alzheimer’s, silver bullets are likely to remain elusive. Many care providers hope that a combination of mutually reinforcing factors (better diet, a more humane environment and stimulating activities) might go a long way to improving the quality of life of dementia patients.

Along these lines, a new study by scientists at the Rensselaer Polytechnic Institute found that improved lighting design at care facilities could also help decrease agitation, insomnia and depression in Alzheimer’s patients.

As Dr. Mariana Figueiro, one of the authors of the study noted, most nursing homes have “horrible, very low continuous dim light.” This kind of lighting appears to upset and interfere with people’s biological clocks. On the other hand, the latest research suggests that custom LED lighting, which provides brighter blue-white spectrum lighting during the day and mellower yellow-white light at night, could help improve the circadian rhythm of many dementia patients.

It’s clear that dementia patients urgently need alternatives to the traditional pharmaceuticals, which can be both toxic and heavily sedative. In contrast, so far the evidence suggests that cannabis-based medications are safe, non-toxic and well-tolerated when compared to conventional drugs.

Helping patients with Alzheimer’s (what you can do)

But as the Alzheimer’s Association points out, dementia patients are desperately in need of non-pharmacological interventions that will improve their lives. There is abundant evidence that the following factors can help individuals with age-related cognitive impairment: