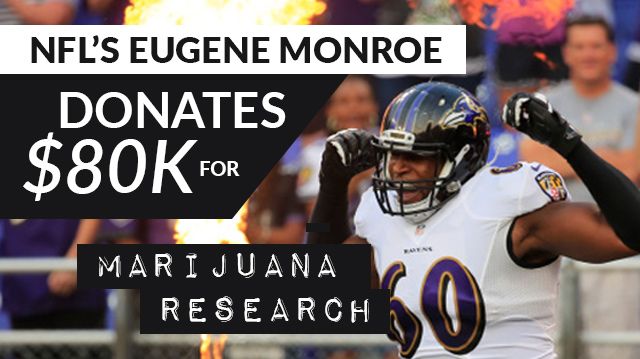 Medical marijuana advocate and offensive tackle for the Baltimore Ravens, Eugene Monroe, has courageously donated $80,000 to fund medical marijuana research at the University of Pennsylvania and Johns Hopkins University School of Medicine. Monroe, the only NFL player to openly back medical marijuana for chronic pain, is speaking out against opioids and encouraging the NFL to remove marijuana from its banned substances list.

When the Realm of Caring Foundation, a nonprofit organization based in Colorado Springs, set a lofty goal of $100,000 for its “Bright Lights Fade” fundraising campaign for medical marijuana research, former NFL, NBA, MLB, UFC and boxing athletes, as well as musicians, came out and generously supported the campaign. However, the biggest donation came from Eugene Monroe, the only NFL player to openly back medical marijuana for chronic pain.

What is particularly courageous about Monroe’s generosity is that the NFL has a strict anti-cannabis policy, which makes it difficult for current players to support marijuana and its potential therapeutic uses. However, despite the risks of speaking out, Monroe bravely stepped forward.

Call to remove marijuana from the banned substances list

Monroe himself missed 16 games this season due to injuries. While the NFL veteran doesn’t use marijuana, he recognizes the potential benefits and fully supports research into how it may lessen the effects, progression, and symptoms of chronic traumatic encephalopathy (CTE).

“As a player, I’m not allowed to use cannabis, but I’ve been prescribed opioids for various injuries,” said Monroe. “The opioids work, but they’re very dangerous and highly addictive.”

Monroe said he has watched fellow teammates and friends battle with addiction to opioid painkillers. On his website, Monroe not only calls for the NFL to remove marijuana from the banned substances list, but also suggests that the NFL fund medical marijuana research, especially pertaining to CTE, as a way to stop the overprescription of addictive and harmful opioids.

“It’s time for the NFL to change its archaic standards to better protect its players and set an example for our young athletes,” said Monroe.

While most people understand the relationship between marijuana and getting high, understanding the chemistry behind it is another thing altogether. Funds, like those donated by Mr. Monroe, back research that looks at the health potential behind marijuana’s 480 natural compounds — 66 of which are cannabinoids.

For instance, tetrahydrocannabinol (THC) — one of the most common cannabinoids in marijuana — stimulates the appetite, making it ideal for chemo patients. Studies suggest it may also be effective for treating neuropathic pain. Cannabidiol (CBD), a non-psychoactive cannabinoid is believed to have numerous medicinal benefits, such as anti-inflammatory properties and the ability to protect neurons from injury or degeneration. Cannabichromene (CBC), the second most common cannabinoid in marijuana, also has no psychoactive effect, and has been found to alleviate pain.

In fact, a University of Michigan study found that patients using medical marijuana to control chronic pain reported a 64 percent reduction in their use of more traditional prescription pain medications.

The University of Pennsylvania is currently conducting three research projects to investigate the therapeutic use of cannabinoids in hemp and marijuana. Two are examining cannabis as a treatment for posttraumatic stress disorder in veterans, and the third is testing cannabis oil to reduce seizures in children with hard-to-control types of epilepsy.

Monroe’s donation will help fund research into the effect of marijuana on pain and brain injuries in football players. The University of Pennsylvania is doing two studies to start, says Dr. Marcel Bonn-Miller of Penn’s Perelman School of Medicine. The studies will examine both current and retired NFL players to understand the impact of cannabis or cannabinoid use on injury recovery.

Why medical marijuana instead of opioids?

While opioids such as Vicodin and Percocet relieve pain, they are also physically addictive. Dependence, which is often accompanied by tolerance, makes it difficult for doctors to determine if a patient is developing a drug problem or if he has a real medical need for higher doses to control pain, says the National Institute on Drug Abuse (NIDA).

“Opioids are ruining lives across the country, and as athletes we’re not immune to those perils,” says Monroe. Monroe has been prescribed prescription opioids as he recovers from shoulder surgery.

When it comes to addiction, marijuana differs from opioids because it tends to be more subtle, suggests research.

Speaking to the Boston Herald, Dr. Gary Whitman of Canna Care Docs suggests, “We have a statewide epidemic of opioid deaths. As soon as we can get people off opioids to a non addictive substance (and medicinal marijuana is non addicting), I think it would dramatically impact the amount of opioid deaths.”

Hundreds of opioid addicts are being treated with medical marijuana in Massachusetts. Supporters claim the new therapy is life-changing.

Meanwhile, Monroe’s career as a Raven is uncertain. While he has three years left on his five-year contract, Monroe says he’ll continue to press the NFL to revise its policies.

“This is an issue that goes beyond any personal career implications,” says Monroe. While he understands why other players may be reluctant to speak out, Monroe feels his and his teammates’ health is worth any repercussions he may face.