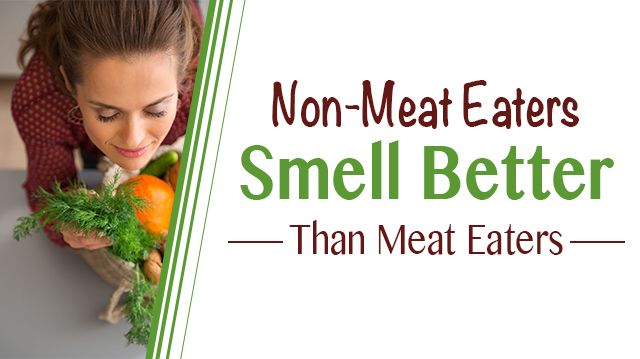 Some vegans, it seems, are grossed out by the idea of having sex with a meat eater, suggests a study conducted in New Zealand. Vegans, who choose a meat-free, dairy-free and egg-free lifestyle, don’t like the idea of getting intimate with anyone who’s been dining on animal flesh.

Annie Potts, co-director of the New Zealand Centre of Human and Animal Studies at New Zealand’s Canterbury University, coined the term “vegansexuals” during her research into the lives of “cruelty-free” consumers. Apparently, some vegan women felt squeamish about the idea of having sex with a person who ate meat. The women expressed their belief that a meat eater’s body is composed of dead animals, and therefore generates fluids that evidently taste bad and smell bad. Some participants cited they couldn’t even kiss a meat eater.

Does eating meat make us smell?

Yes, according to a 2006 anthropological study carried out by researchers in the Czech Republic, who found that meat-eaters smell worse than their vegetarian counterparts. Although body odor often occurs with poor hygiene, apparently it can also result from a diet packed with meat products.

Researchers collected samples of natural body odor produced by men who ate meat and those who did not. The men refrained from using perfumes, deodorants, antiperspirants, aftershave and shower gels. The researchers used underarm pads to collect the participants’ body odor. After the men had eaten a controlled diet for two weeks, women then rated the men’s body odor for attractiveness. The results showed that red meat consumption had a noticeable impact on armpit odor. The bottom line, non-meat eaters’ body odor was judged as being more pleasant, more attractive, and less intense.

The researchers found there may be a link between a change in body odor and fat proportion in meat. In other words, the fattier the meat, the smellier we get.

Particular compounds and metabolic processes may be the reasons why meat consumption makes us smell, suggests researchers. As our body temperature rises from stress, nervousness, or warmer air temperatures, sweat glands activate. Sweat itself is odorless, but body odor is created once the sweat hits the skin’s surface and combines with bacteria, according to the Mayo Clinic.

Another reason for body odor could be undigested protein from meat rotting in the gut, claims David Klein, PhD, HD, director of the Colitis & Crohn’s Health Recovery Center. In the same way that milk spoils on a warm day, rotten meat yields a rotten egg odor, particularly when expelled by methane gas.

In addition, meat eaters can sometimes have “doggie breath,” similar to what you might smell on your dog, says Dr. Lawrence Wilson of the Center for Development, Inc. For dogs it’s normal — for you, not so much. Dogs live on meat, and produce ammonia and other smelly chemicals as they digest the meat. Human breath shouldn’t smell that way, unless they overdo it on meat or just don’t digest meat very well.

Constipation may also cause body odor. When you are constipated, food takes too long to pass through the intestines. When food sits in the intestines for a day or so, certain toxins reabsorb causing odors to escape, none of which are pleasant.

While a diet high in meat could mean you suffer from bad breath or body odor, does that mean you need to stop eating meat? — of course not. Nevertheless, you may need to make a few simple changes.

Start on the inside

High protein intake and even grains increase heat in the body, drying up your digestive tract and contributing to constipation, foul smelling stool and bad breath. Bring your body back into balance with cooling foods, such as radishes, cucumbers, celery, watermelon, cantaloupe, pears, and apples, suggests Loren Cordain PhD, an expert on paleolithic diets and founder of the paleo movement.

In addition, adding fermented foods to your diet, such as sauerkraut, kimchi and kombucha tea, as well as polyphenol-rich green tea, can potentially balance gut flora allowing for better protein digestion.

Include more leafy greens, such as spinach and parsley in your diet, which will increase your intake of chlorophyll, the green pigment found in algae and green plants. Chlorophyll is a powerful antioxidant and natural deodorizer that helps fight bad breath and body odor.

Remain calm and carry on

Unless you are sleeping with a vegan, chances are your meat-eating partner may not even notice a malodorous scent. Even so, no one wants to smell bad, particularly because of something as basic as eating meat. Yet, stressing will only make things worse.

The underarm region contains abundant amounts of apocrine glands, which produce milky secretions, particularly during times of high stress. Although these secretions are odorless, they can quickly become stinky when reacting with bacteria on your body, thus creating bad body odor.

At the very least, if you enjoy a protein-filled diet, it is important to maintain good dental hygiene, suggests Cordain. Extra protein in your diet may increase bacterial growth in the mouth. These bacteria produce sulfur compounds, which lead to bad breath — and no one finds bad breath attractive. So, go ahead and enjoy meat, just make sure to neutralize that smell.