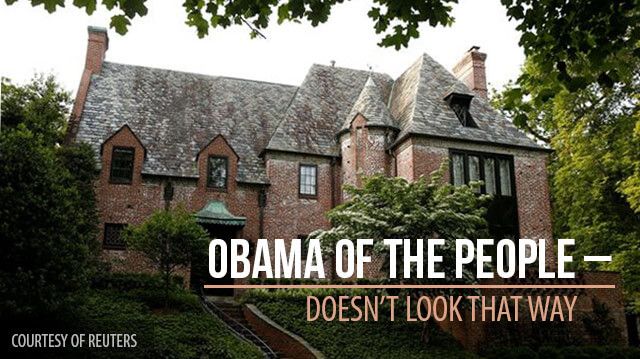 Of course, as soon as the news of the Obamas’ new residence hit the news cycle, the critics jumped on it. Washingtonian magazine protested, “It feels bizarrely out of a character for a man who proclaimed “We didn’t become the most prosperous country in the world just by rewarding greed,” to settle down on a block where a 4-bedroom home averages about $2.8 million.”

The article did note that like all former presidents, plenty of room was a necessity for the Secret Service agents who will continue protecting them. The magazine opined that Obama would do the city a great service by moving into “a struggling DC neighborhood,” and becoming a community figurehead. Five other former presidents have called Kalorama home – Woodrow Wilson, William Howard Taft, Warren Harding, Franklin D. Roosevelt and Herbert Hoover. Senator Edward Kennedy was a longtime resident. Wonder if any contemporary magazines thought they should have lived in the ghetto, as Washingtonian believes the Obamas should?

Although the grand house sits on only a .25 acre city lot, it includes formal, terraced gardens. The courtyard has room for up to 10 vehicles. Inside, there are his-and-her master bathrooms, white marble countertops and hardwood floors, according to the New York Times.

The Obamas still have their home in Chicago. Older daughter Malia, who graduates from Sidwell Friends School this year, plans to attend Harvard. She’s not heading there this autumn – Malia’s taking a “gap year” until fall, 2017.

The quiet, leafy neighborhood offers the type of protection necessary for an ex-chief of the state. It’s close to Embassy Row, so there’s already tight security in the area. The Secret Service agency will design a security plan specific to the house and surroundings. That will likely include bullet-proof window installation, parking rule changes in front of the home and electronic surveillance.

Farewell to a family man

When Obama leaves office, the only certainty is that the presidency will fall to a person not exactly famous for successful marriages and families. Donald Trump is twice-divorced and left his first wife Ivana – mother of his three children – for a young blonde beauty from Georgia named Marla Maples. They had a daughter, Tiffany, and married in 1993, with O.J. Simpson among the wedding guests. Divorced in 1999, Trump married Slovakian model Melania Knauss in 2005, a woman 23 years his junior. They have a son, Barron.

Hillary and Bill Clinton have been married since 1975, but Bill’s wandering eye caused “pain in my marriage” as he admitted long before the Monica Lewinsky affair. During the 1992 presidential campaign, Clinton’s longtime staffer Betsey Wright coined the term “bimbo eruptions” to deal with the women alleging extramarital affairs with the candidate. The Clintons are still together 41 years later, but neither is pretending it’s been easy.

Bernie Sanders was married to Deborah Schilling from 1964 to 1966. He has a son by a woman he did not marry, Susan Mott. His son was raised to call him “Bernard,” not “Dad.” He married Jane O’Meara in 1988, and she brought three stepchildren to the union.

During the eight years of his presidency, there has not been a whiff of scandal about the Obamas’ personal lives. They are that throwback to the “good old days,” a couple apparently devoted to each other and their children. His mother-in-law Marian Robinson lives with them in the White House, and will move to the Kalorama house. Families all over the country could learn a lot from the Obamas whether they live in a hovel or a $100 million New York City penthouse.