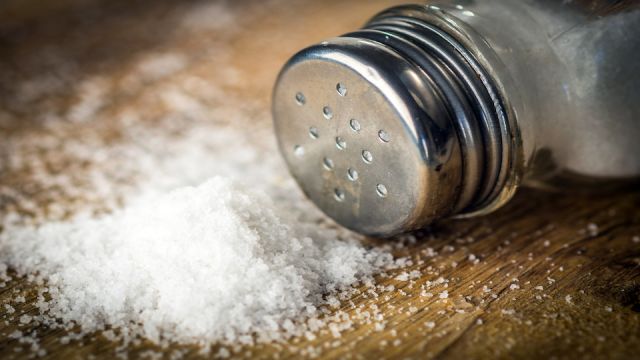 Humans need salt to survive, but it has to be the right type of salt. There is much confusion surrounding this, and you may hear things like salt is bad, implying that all salt is bad.

To be clear, not all salt is created equal. What we don’t need is table salt – it is refined and very far removed from the type of sodium the body needs to function. In fact, table salt actually depletes the body of necessary nutrients and wreaks havoc while doing so.

Here are a few things we know to be true about table salt… and more bad news to come.

When you eat table salt, your body holds onto water which then causes your blood pressure to increase. Hypertension occurs when blood pressure is chronically elevated and is a condition that can lead to both heart disease and stroke.

Table salt has no nutritional value

Unlike other “real” salt varieties, table salt provides no nutrients to the body. It is so heavily processed that it is basically just sodium and chloride and nothing else. In contrast, natural sea salt contains potassium, phosphorus, calcium, iron, iodine, manganese and zinc. Don’t be fooled by table salt that claims to be enriched with iodine as this is iodine that your body has a hard time metabolizing.

It is estimated that there are over 31.6 million cases of eczema in the United States which puts it neck and neck with diabetes, both inflammatory conditions. Eczema is a painful condition that causes the skin to itch, become dry, crack, bleed, blister and scab over.

According to a new German study, the high numbers of persons suffering from eczema is related to the amount of table salt being consumed.

The study published in Science Translational Medicine found a strong connection to the consumption of table salt and the aggravation of T-helper cells – part of the immune systems that can go haywire. When these cells function outside of their normal routine, they cause inflammation and encourage allergy-based conditions including arthritis, asthma, and eczema.

T-helper cells (Th-cells) are true to their name, helping to search out infections in the body. Once the helper cells have found a dangerous microbe, they call in an army from the immune system comprised of different types of Th-cells to destroy the bad guys.

For over twenty years, scientists thought that there were only two types of Th-cells, Th1, and Th2 cells. The Th1 cells seek out intracellular threats including bacteria and viruses that hide in cells. The Th2 group destroys parasitic worms including tapeworms by increasing production of mucus causing worms to exit the body.

In 2005, scientists were surprised to find another group of helpers -Th17 cells that had been hiding.

According to Dr. Jay Kolls, a professor of medicine and pediatrics at Tulane University,

“Th17 cells are critical for fighting extracellular pathogens — yeast and certain bacterial infections — that largely live outside our cells, particularly on mucosal surfaces like in the mouth or GI tract.”

According to the scientists involved in the study, the Western diet contains an overload of table salt which causes the T-helper cells to promote the inflammatory response.  Researchers found a 30 times higher accumulation of salt in the skin of eczema patients when compared to those without eczema.

Co-study leader Christina Zielinkski, an immunologist at the Technical University of Munich was curious about the relationship between table salt and eczema, after reading a 100-year-old German medical book written by pediatrician Heinrich Finkelstein entitled  “The Textbook of Sickling Diseases.”

“According to [Finkelstein’s] personal observations, a salt-restricted diet leads to improvement of atopic dermatitis in children,” Zielinski said. “Atopic dermatitis” is the technical term for the chronic, allergy-version of eczema — which makes up nearly 60 percent of all eczema cases.

What the research uncovered

When naive Th cells were exposed to high amounts of sodium in a petri dish, they moved towards a Th2 response. This is an important finding because Th2 responses are generally implicated in allergic conditions including asthma and atopic dermatitis,

In addition, it was found that the salt continues to elicit inflammatory reactions even after the Th2 cells become mature – this explains why they found a high salt content in eczema lesions.

It was further discovered that some of the naive Th-cells also moved towards becoming Th17, A study out of Yale University published six years ago implicated salt to another autoimmune condition – multiple sclerosis. In this study, mice who consumed high-salt diets developed increased brain inflammation relative to multiple sclerosis. Also, an overpopulation of TH17 cells has been implicated in psoriasis – yet another autoimmune condition.

Allergies on the rise

Allergies in humans have increased over the last 50 years, and research has found that changes in human habits and the environment are most likely to blame for this increase. However, because of the nature of the highly processed, table salt laden Western diet, scientists are thinking salt alone may be to blame for the increase in allergies.

What this means for us

This is just another reason to be sure that you are eating a clean diet, loaded with whole, healthy food and not consuming processed or refined food full of table salt. If you suffer from atopic dermatitis and nothing seems to be helping, take a look at your diet and determine just how much table salt you might be consuming.

Season food with healthy natural salts like Pink Himalayan salt and real sea salt and ditch the table salt once and for all.