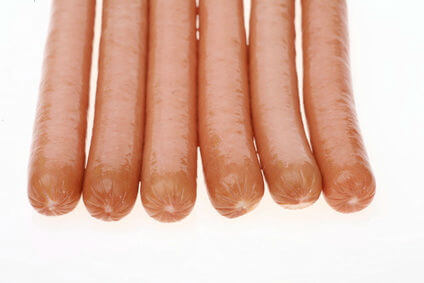 We’ve said it before and we’ll say it again – processed meat is hazardous to your health. The various chemicals and copious amounts of sodium it contains have no business being introduced into your body.

On top of the general – and already substantial – risk factors that these chemically-treated products carry, a new study has found that about one in three people have a genetic variant that may significantly increase their risk of developing colorectal cancer by consuming processed meat.

Colorectal cancer is the third leading cause of death for American men and women of most races. It is linked to many factors, including genetics, environment and lifestyle. This new study, presented at the annual American Society of Human Genetics meeting this year, sought to explore the connection between processed meats and this deadly cancer.

Over the course of the study, researchers examined over 2.7 million genetic sequences in 9,287 colorectal cancer patients, as well as in 9,117 people without cancer, used as the control group. They tested which sequences interacted with both red meat and processed meats in these participants.

The researchers discovered that the link between processed meats and colorectal cancer risk was notably elevated in people who displayed the genetic variant rs4143094, about 36 percent of the population.

They hypothesized that when these people digest processed meat, the inflammatory response which it triggers is not properly suppressed by the GATA3 transcription factor (which normally helps to suppress the inflammatory and immunological response to these foods) in individuals who carry this genetic variant.

The research team also found another genetic variant, rs1269486, which boosts the power of fruits and vegetables in the prevention of colorectal cancer. So, while eating an abundance of fresh, organic produce is beneficial for everyone, for some people, it may be even more significant in the prevention of this cancer.

This is not the first study to explore the dangers of processed meats. A large-scale study published earlier this year in the journal BMC Medicine associated the consumption of processed meats with a higher risk of early death.

This study, which looked at approximately 500,000 individuals across Europe over a period of 13 years, found that those who ate over 160 grams of processed meats per day (the equivalent of about 2 sausages and one slice of bacon) were 44 percent more likely to die during the 13-year testing period than the others in the study. This study also found a link between eating processed meats and heart disease, cancer, and death from other causes.

Dr. Jane Figueiredo, the lead author of the study which found a genetic variant in a third of the population signifying higher risk of colorectal cancer, says, “diet is a modifiable risk factor for colorectal cancer.” While we may not be able to control our genetic makeup, and certain other factors that put us at risk, avoiding processed meats is definitely something that we can all do that may greatly decrease our chances of illness.

Isn’t it time we said no to processed meats, and stopped feeding them to our children? Even small quantities of these products, especially when eaten regularly, could spell disaster.