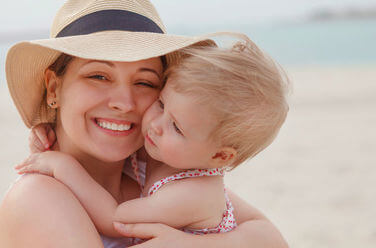 Buddha once said, “with our thoughts, we make the world.” Our perceptions greatly shape both the world around us, and the worlds inside our minds. However, if you have children, it’s not only you that is affected by your outlook on life; your children are affected as well.

A new study performed at Boston Children’s Hospital shows that a mother’s perception of her social status significantly impacts the cortisol levels (indicators of stress) and brain development of her children.

Researchers studied 38 children between the ages of 8 and 11. All of the children’s cortisol levels were measured via saliva samples, and 19 of them had functional MRIs of their brains, highlighting the hippocampus. The hippocampus is the part of the brain responsible for reducing stress response and creating long-term memories.

The mothers of the 38 children were asked to rate their social status, comparing themselves with other people in the United States, on a scale of 1 to 10. After results were adjusted for gender and age, researchers found that the children of the mothers who perceived themselves as belonging to a low social status were more prone to have increased cortisol levels, and showed less activity in their hippocampus during learning tasks.

Interestingly, when actual socioeconomic status was calculated, factoring in the mothers’ education and income relative to family size, it did not seem to connect to higher cortisol levels or less hippocampal activation. This shows that perception is the key factor, and how situations are viewed and approached by mothers is significant to a child’s development, while actual socioeconomic status does not seem to be nearly as impactful.

Margaret Sheridan, PhD, the study’s first author, says, “our results indicate that a mother’s perception of her social status ‘lives’ biologically in her children.” Sheridan also hypothesizes that some of these perceptions may be culturally based.

While this study was performed solely on mothers, it would be interesting to see the results if fathers’ perceptions of their ‘status’ were analyzed, as well. In a family where both parents are present, however, both parents influence each other, and so it would follow that each parent would affect the other’s perceptions, and these would consequently affect the child.

The results of this study reinforce that life really is what you make it, and in part, the lives of the next generation are also swayed by your outlook. If you believe in yourself and work towards your goals, no matter what your background or current situation, you will find a way to succeed, and your children will be healthier for it.