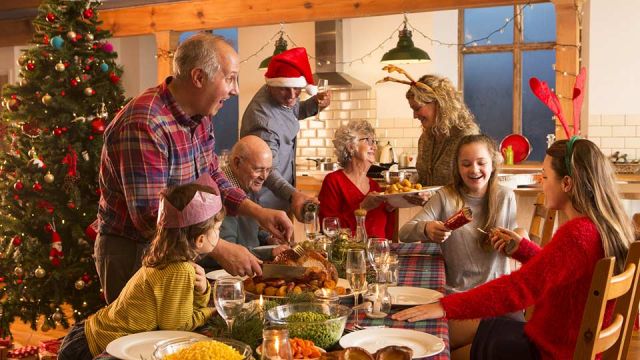 The stage is set for a glorious Christmas dinner. The table positively groans with mountains of meat, piles of potatoes, scores of salads and bucketloads of beverages. The obligatory piece de resistance, that organic turkey you forked out for to impress the health-conscious rallies, is glistening invitingly at 12 o’clock.

Surely nothing could get in the way of this being the best Xmas dinner you’ve ever facilitated.

But on the social scale, awkwardness ensues. Gerry, the hitherto unknown boyfriend of your eldest daughter, has had far too much punch and is making a right buffoon of himself. The disapproving face of Aunt Mary, who you recklessly sat next to Gerry, seems to be getting more puckered as the night goes on. Your eldest daughter giggles hysterically, well aware that Gerry is reflecting rather poorly on her choice of men, Uncle Tom is belting out atrociously unfunny jokes left right and center, and your cousin George continues to sit in stony silence, refusing to meet anyone’s eye.

Do you know how to relate to each of your dinner guests and overcome their various social foibles? Well, it just so happens that I know a thing or two about the textbook personalities you’re likely to find at the dinner table. And once you’ve ratted them out, it’s only a matter of time before you kick-start some half-decent table banter and make this a memorable Christmas feast for years to come.

Most dinner hosts groan inwardly when they suspect the dreaded introvert is lurking amongst their guests… but it doesn’t have to be that way. Yes, introverts are generally of the quiet, unassuming nature, but that doesn’t mean they need to be sat at a separate table all on their own, perhaps with a good novel sitting astride their dinner plate.

Far from it, in fact. But the introvert should be approached much as the same as a cornered animal: with mixed caution and respect. Don’t expect them to dive into a crowd of festive revelers and start throwing out jokes willy-nilly like Uncle Tom, but they’ll certainly enjoy some in-depth one-on-one banter. Be sure to sit them next to anyone else in the dinner group who enjoys postulating on the follies of man or just a good heart-to-heart. Uncle Tom probably isn’t the ideal candidate.

While you might be well-placed to identify the classic shy, crowd-averse introvert, you’ll possibly be playing host to another at your Christmas dinner table: the outgoing introvert. This is the kind of guy or gal who, for short bursts, is the very life of the party. He’s trading tit for tat with Uncle Tom’s outrageous jokes, he’s shouting jovially down the table at other honored guests, and he’s tucking into the turkey like you’ve actually managed to not dry it out this time.

But there will come a time when the outgoing introvert begins to wilt. Like all introverts, he recharges by spending time on his own. So if he seems to be declining rapidly and tiring of Uncle Tom, point him in the direction of your personal book collection or even make up an excuse so he can make his timely escape from the Christmas gathering.

While the introvert might be loathe to deliberate on his feelings, the emotional personality in your Christmas dinner group is all for it. These sorts are the most likely to take that Christmas cheer seriously, dishing out the merriment like it’s their sole purpose in life. They’re also going to be the ones who bust out the Auld Lang Syne, insist on saying Grace and holding hands, and get offended at some of Uncle Tom’s more bawdy jokes.

Emotionals act as the UN peacekeepers at the table, seeking to uplift those they think aren’t enjoying themselves, step in and diffuse potential arguments, and take it upon themselves to take other Emotionals under their wing. Unfortunately, they’re also the most likely to get upset from the smallest of bickerings, and any failed attempts to diffuse a situation is generally not taken lightly.

They should be gently reminded that, while their presence is very much appreciated at the Christmas dinner table, it’s not their job to solve everyone’s problems. Remind them to sit back, enjoy the food, and not get too invested in the mental instability of others.

If there’s anyone who’s going to get your emotionals all riled up at the table, it’s the quintessential arguer in every family. They like nothing better than a good mental sparring over any topic with even the slightest bit of contention, even if they weren’t actually part of that argument in the first place. Arguers are the thinkers of the group, and will dissect any statements made by other members and very quickly let someone know that their facts are lacking.

Obviously, sitting the arguer next to the emotional isn’t a great idea. If you’ve got a few jokers or people unlikely to take offense easily, be sure to sit them next to the arguer. Or anyone who’s actually well-researched (and likely to hold their own in an argument) will do nicely.

But when there are multiple arguers at the Christmas dinner table, things get a little tricky. Here’s where you really need to analyze your guests, and discern whether your arguers are the easy-to-offend type or the ones who can take an insult or two. Happy-go-lucky arguers can be sat next to each other, and will generally argue amongst themselves to their heart’s content. Easily offended arguers should be spaced around the table, preferably sitting next to folks who can hold their own in an argument but laugh off any perceived slights.

It’s a delicate game you’re playing, but by knowing your personalities there’s no doubt this will be a Christmas to remember!