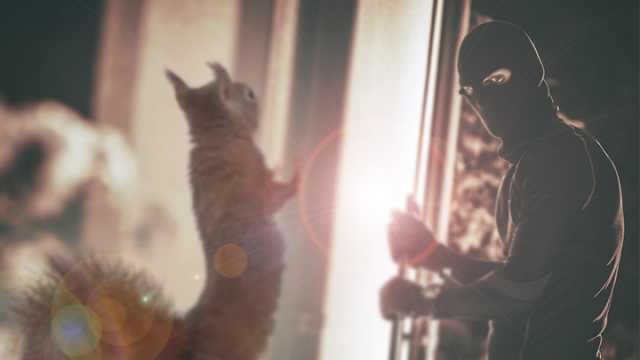 When we think of animals that may help protect our homes from intruders, which animals come to mind? Dogs would be the obvious answer. Most people only associate dogs with protecting homes. There are exceptions, of course. A loud parrot may alert a sleeping family to a break in, but most animals we would associate with protecting us seem much too dangerous to keep in the house (tigers belong out in the wild!).

Well, Adam Pearl of Meridian, Idaho doesn’t have a guard dog, but he does have a heroic guard squirrel named Joey.

When Pearl first took Joey into his home, when he was only about a week old, he never dreamed that Joey may one day grow up to be a hero. Joey was found in a flower garden by the daughter of a friend, and Pearl decided to take the little guy in. He fed Joey every two hours, who grew up to be a smart, energetic squirrel.

On his unlikely pet, Pearl stated, “His temperament is kind of like a cat. When he wants attention, he’ll run up to you and climb up your leg.”

Pearl also told reporters that Joey’s diet consists of green veggies and nuts. Spinach is his favorite food (very healthy, Joey!). He also likes to bury nuts in Pearl’s houseplants, and, as a testament to his intelligence, trained himself to use a litterbox. Joey has been living with Pearl for about six months, and the two have developed a bond.

On February 7, Pearl knew something was amiss when he returned home. He saw footprints in the snow leading to the back of his house (where people do not normally enter), some open doors inside his home and scratches around the lock of his gun safe. Knowing someone had been in his home, Pearl called the police. Meridian officer Ashley Turner arrived at the scene, was greeted by Joey and went in search of the culprit.

When Officer Turner returned, she had some of Pearl’s belongings in tow. The intruder was found! She also had news of Joey’s heroism.

“She said while she was questioning the individual, he had scratches on his hands, so she asked him ‘did you get that from the squirrel’ and he says ‘yeah, (expletive) thing kept attacking me and wouldn’t stop until I left.’”

Not many can say a squirrel guards their house

Officer Turner told Pearl that the teenager who had entered Pearl’s home said that he was scared of the squirrel, so he took what he could grab and left as quickly as he could. Joey’s onslaught may very well have prevented the teenager from breaking open the safe, taking more belongings and doing a lot more damage.

On his heroic pet, Pearl explained:

“Nobody can believe it because who can say they have a squirrel that guards their house — which is crazy. You can’t ask for much more than that. He is a pain in the butt, but he is great.”

He seems great, indeed. Way to go, Joey! And kudos to Pearl for saving Joey’s life and taking care of him. His kindness certainly seems to have reaped big rewards! I bet Pearl feels a bit safer leaving the house now, knowing that Joey is keeping a vigilant eye on things.

Has your pet ever saved the day? If so, please share your story with us!