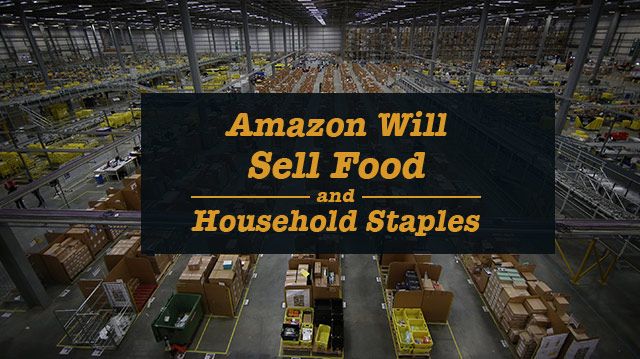 Get ready for even lower prices online. As soon as early June, online retailer Amazon.com is expected to begin promoting a line of private labels such as Happy Belly for nuts, spices, and tea; Mama Bear for baby items; and Presto! for household items and detergent.

Earlier this year, the e-commerce giant made its foray into the fashion industry, quietly introducing at least seven apparel lines such as the women’s brand, Lark & Ro, which is available on the Canadian site, Amazon.ca. More than 1,700 items, typically priced less than $100, have been selling on Amazon’s U.S. website.

A private label or store brand often means that the average consumer can expect a big dip in prices for many household items. Amazon has given its main competitors, big-box retailers Target and Walmart, a reason to be concerned about future sales. Retailers such as Kohl’s and Macy’s already are hurting, feeling the Amazon effect and the online market growth.

In July, Amazon.com overtook Walmart as the world’s largest retailer after reporting an unexpected profit increase in the second quarter of 2015. Most physical retailers already offer store brands in order to compete on price.

Private labels — also known as store brands, generic brands, or the more disparagingly, no-name brands — are nothing new. However, so much has changed since generic products sadly sat on store shelves while customers snagged the name brands. Retailers such as Kroger, Walmart, Target and Trader Joe’s have strong-selling private label lines.

It makes sense because house brands cost less to produce. They don’t have to absorb the overhead costs name brands incur, such as national advertising and marketing campaigns. That allows stores to sell them for lower prices and continue to make profits.

The Private Label Manufacturers Association reports sales of store brands climbed to $118.4 billion in the U.S. last year. Consumers tend to go for them because of the quality they offer for the price.

In a Market Track survey, 88 percent of consumers reported buying private labels, mostly because of the price. When given a choice between a national brand and a private label brand, most purchasers go for the private label, especially if it has a lower price. According to Market Track, at least 80 percent of buyers will purchase solely because of price, and that’s where Amazon has always been on top.

Not just anyone will be able to purchase the items online, though. Only Amazon Prime members, who pay $99 a year for two-day delivery, free streaming of movies and TV shows, and many other extras, will be able to make Amazon brand purchases — for now, at least. Prime members represent a lucrative market, and that’s a key reason for Amazon building out its ecosystem. Prime allows the e-commerce giant to gain more control of the $100 billion retail market.

In addition to paying for the membership, Consumer Intelligence Research Partners report Prime members spend an average of about $1,100 a year compared to $600 per year for non-members.

While Amazon does not release its numbers, a January Consumer Intelligence Research Partners report shows that by the end of last year, 54 million Americans were Amazon Prime members. That’s 21 percent of the U.S. population.

To be sure, Amazon has infringed on most everyone’s market share, from electronics retailers, TV streaming services, and even grocery stores.

Despite that success and proof that it’s a force to be reckoned with, especially during the past year, some analysts are questioning whether Amazon can continue its market expansion and if it will be able to continue to compete against its main brick-and-mortar rivals, Target and Walmart.

Amazon’s immense popularity has put pressure on some stores with a specific niche, but others remain strong because of customers who are still slow to purchase goods online.

Retailers that continue to compete include cosmetics shop Ulta, which has built a cosmetics empire in suburban markets where rent tends to be less expensive and customers can stop in to sample products before they buy them. Sales at chain jewelry stores such as Jared The Galleria of Jewelry haven’t declined much because of customers who still prefer to shop in stores rather than buy online.