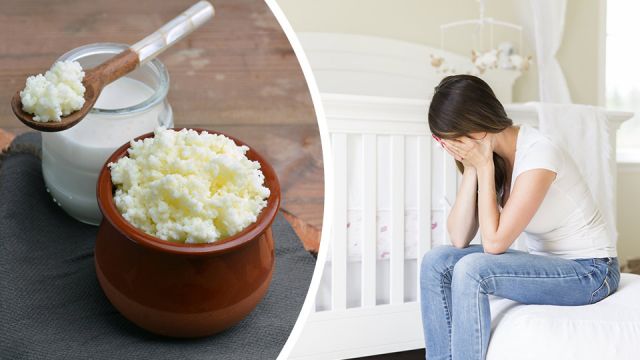 Postnatal depression affects one in ten women. It’s a type of depression that many parents experience after childbirth. It may include extreme sadness, low energy, anxiety, changes in sleeping or eating patterns, crying episodes and irritability. And for those who suffer from postnatal depression, it can be lonely, distressing and frightening.

Fortunately, a new study has found that probiotics may actually reduce the risk of postnatal depression. In fact, research indicates probiotics may even have a positive impact on your mental health, overall.

Postnatal depression is associated with persistent depression, and, in a few cases each year, suicide. But it not only affects the parents, it can also impact on the long-term well-being of the baby. Recently a study from the University of Auckland and Otago found evidence that suggests probiotics given in pregnancy can help prevent or treat symptoms of postnatal depression and anxiety.

Scientists in New Zealand surveyed a group of 423 women who were between 14 and 16 weeks pregnant. The group was split, and half were given the probiotic Lactobacillus rhamnosus HN001. The other half were given a placebo. These were taken once a day during pregnancy, and for the first six months after birth. Researchers found that mothers who took probiotics opposed to those who took a placebo reported significantly lower depression scores and anxiety scores.

Dr. Rebecca Slykerman, lead author for the study, said the results were significant. Taking a probiotic to assist in postnatal depression is a simple way to help mothers with their mental health.

“Woman are unable to access psychological therapy or are reluctant to take antidepressant medication in pregnancy or while breastfeeding,” says Dr. Slykerman. “Furthermore, it takes several weeks for the therapeutic effect of antidepressants to appear, and there is a 15 to 30 percent discontinuation rate. Safe and effective therapies to prevent and treat postnatal depression are needed.” However, Slykerman still urges caution. “The results must be replicated before recommending all pregnant women take probiotics.”

Even more exciting, the study suggests that probiotics may also help treat depression and anxiety. The rates of clinically relevant anxiety on screening were half that in the probiotic-treated mothers. This means probiotics may have a significant impact or mental health overall.

There‘s a lot of interest right now in the human microbiome — the groups of bacteria that live in various parts of the body, including the intestine, skin and lungs — according to Dr. Athos Bousvaros, pediatric gastroenterologist at Boston Children’s Hospital for Harvard Health. There are approximately 10 times as many bacterial cells as human cells in the body. The vast majority of these bacterial cells are in the intestinal tract and serve many purposes. But research now shows a connection between the brain and gut. This means changes in intestinal bacteria could play a significant role in conditions such as anxiety or depression.

The intestine has its own separate nervous system. It generates many of the same neurotransmitters that the brain generates. Too much or too little of them can result in constipation or diarrhea. These neurotransmitters are very important in gut health, and researchers believe that the brain and gut communicate. So, it is possible that anxiety and depression may actually trigger abdominal pain or other GI symptoms. It’s also possible that conditions such as chronic abdominal pain or constipation might also trigger anxiety or depression.

For decades, probiotics have been widely-used in countries like China and Japan, mainly in the form of fermented milk for diet and gut health. Additionally, many studies point to probiotics being helpful for conditions like diarrhea or colitis. But research published in Annals of General Psychiatry, which was a result of a collaboration of studies on probiotics to treat anxiety and depression, suggested that there may be benefits to taking probiotics for anxiety or depression — thanks to the brain-gut connection.

An easy solution for this often unnoticed condition

There are still many unanswered questions, according to study researchers, including the choice of probiotic, and the dose and duration of treatment. At this point, more research is needed to determine if probiotics could be used as the primary treatment for maternal mental health problems. Or, if they should be used as an adjuvant treatment to standard therapy.

Nevertheless, “the results are considerable,” say researchers. After all, probiotics are simple, safe and cost-effective. And, they could easily be implemented into a diet as a preventative for postnatal depression.