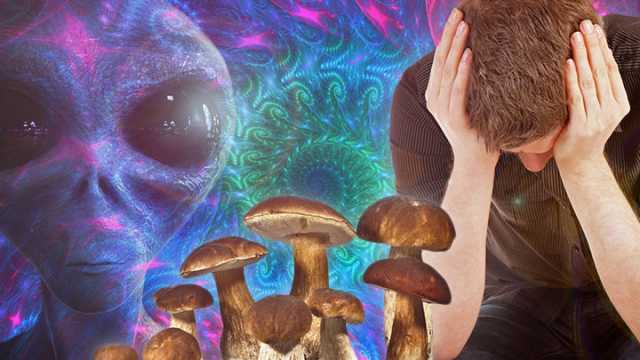 The Hubble telescope, analyzing radio signals from outer space, and robotic explorations of other planets are just a few methods scientists are using in their search for extraterrestrial life. More recently, pioneering entrepreneurs have proposed colonizing Mars and other outposts in the solar system as a way of broadening the search for alien existence.

Those approaches seem positively down-to-earth, however, compared to a method some intrepid explorers are using to try and connect with ETs. Some researchers believe that psychedelics provide a means through which humanity may be able to experience and contact interdimensional aliens.

How credible is this technique? Are substances like LSD, psilocybin and DMT a portal to an objective reality called hyperspace, which contains alien beings? And what are the prospects that mind-altering drugs could prepare humanity for the next step in our cosmic evolution, which includes direct contact with beings from far flung regions of the cosmos?

Psychedelics as a portal to alien encounters?

According to author and consciousness researcher David Jay Brown, “Fascinating research has been done” on a psychedelic substance called DMT “with results that seem far more astonishing than any science fiction.” As he elaborates, “It appears that DMT has the extraordinary power to open up an interdimensional portal into another universe — often referred to as “hyperspace”— and to reliably allow us to establish contact with the intelligent beings who reside there.”

Before you roll your eyes, it’s worth examining what DMT is, how it impacts consciousness and the amazing experiences it engenders. As Dr. Rick Strassman, a psychiatrist and psychopharmacology researcher at the University of Mexico notes, DMT is a naturally occurring chemical, which is produced by some plants — particularly the ayahuasca vines.  It is also manufactured endogenously in the human body.

To date, scientists remain perplexed by the possible function of DMT, which is has been nicknamed “the spirit molecule” on account of its ability to produce otherworldly effects.

Dr. Strassman suggests that because the brain naturally produces DMT, the molecule may play a role when it comes to “unexplained mental phenomena such as spontaneous mystical experiences, near-death experiences, non-human entity contact and schizophrenia.”

DMT is considered a hallucinogen. Unlike LSD, magic mushrooms or peyote, the effects of DMT are relatively short lived (a typical trip last less than 30 minutes). However, DMT users invariably describe the drug as producing the most intense and life-altering high they’ve ever experienced.

Those who have experienced a DMT trip describe an initial rush, which is followed by heightened emotions, hallucinations involving geometric patterns and access to entirely new levels of existence. Many subjects who take DMT describe encounters with alien beings who are intelligent and technologically advanced.

Interestingly, volunteers in DMT research experiments frequently describe their alien encounters in similar terms. For instance, they feel “like their mind and body was probed and tested, or even modified in some unexplained way. The beings communicated with the user through gestures, telepathy or visual imagery.”

The vast majority of DMT users in research experiments have been described as intelligent, educated and well-grounded. Yet, they refuse to believe their otherworldly experiences are merely subjective hallucinations. Instead, most DMT research participants are firmly convinced that their encounters are objectively real and a reflection of a reality that extends well beyond that envisioned by the current scientific worldview.

An early pioneer in psychedelics, Terence McKenna, once described the beings he experienced during a DMT trip as “self-transforming machine elves.” The mystic ethnobotanist also speculated that psychedelic mushroom spores may have hitched a ride to earth on asteroid fragments and meteors that originated from other planets. Indeed, he believed that botanical psychedelics may harbor alien intelligence or portals to other dimensions, which humans can access by consuming them.

Farfetched thinking, perhaps. However, scientists are convinced that some spores are hardy enough to travel through space just as McKenna proposed. In addition, hard-nosed scientists like Mark A. Rodriguez are developing ways to test the possibility that DMT provides access to parallel universes or alternate realities, which are inhabited by aliens.

At first glance, the notion that people might use psychedelics to contact aliens seems flaky. However, many respectable physicists, like Michio Kaku, suggest that we do inhabit a multi-dimensional universe. In Kaku’s view, humans are like fish in the pond — we are blissfully unaware of dimensions outside of our normal daily experience.

Are psychedelic substances like the proverbial telescope, allowing people to experience undiscovered worlds? It’s worth remembering that Galileo was persecuted for raising the heretical idea that the earth revolved around the sun. Indeed, members of the Inquisition refused to look through Galileo’s “magical spyglass,” lest their eyes be deceived by his “sorcery.”

Of course, we now know that Galileo was on the threshold of discovering a new paradigm. It’s too early to tell if DMT and other psychedelics offer a portal to a deeper understanding of our universe.

But the anecdotal reports and emerging research are intriguing. I think author David Jay Brown gets it right when he says that Dr. Strassman’s work “could mark the beginning of a new scientific field that systematically explores the possibility of communicating with higher dimensional entities, and this might prove to be a more fruitful endeavor for establishing extraterrestrial contact than the SETI project.”