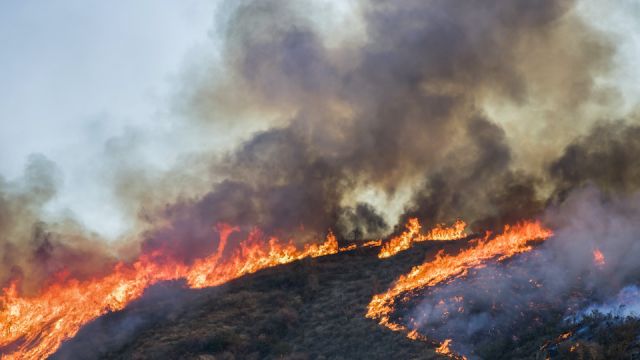 As wildfires rage on the West Coast, air quality becomes more and more deadly. But it doesn’t stop there. Smoke from wildfires has drifted over the United States, affecting the lungs of American citizens as far as Washington, D.C. Wildfire destroys more than just homes, businesses, habitat, and timber. It can be devastating to your health as well by polluting the air with harmful emissions. No matter how politicians spin it, the real danger of breathing in wildfire smoke impacts Americans from the west coast to the east coast.

When it comes to wildfire, this year has become one of the worst environmental disasters in American history — with two more months of fire season remaining. But according to fire experts for The Mercury News, the wildfires cannot be attributed to one thing, such as not raking the forest floors. This year’s shocking wildfires are the result of a perfect storm, including a dry winter, millions of dead trees, lightning strikes, and extreme heat largely due to climate change. Unfortunately, when it comes to the lungs of Americans, this spells disaster, since wildfire smoke is made up of fine particles and gases from burning trees, plants, and other materials. The fact is, smoke from wildfires can make anyone sick — even those who are healthy. Many people are now asking: what dangers are we breathing in?

Carbon monoxide in the atmosphere

Wildfires are part of nature. They play a significant role in shaping ecosystems through change and renewal. But fire can be deadly, causing more harm to human health than anticipated. One of the big dangers of wildfire smoke is the effects of breathing in carbon monoxide (CO) gas. CO is a fairly unreactive compound, which means it doesn’t pose much of a threat to vegetation. However, when it comes to humans and any other air-breathing creatures, the gas is extremely poisonous, says UCAR Center for Science Education. CO often occurs if there is too much carbon or too little oxygen present when something burns. Indirectly contributing to a buildup of some greenhouse gases. Inhaling CO decreases the body’s oxygen supply, says the New York State Department of Health. This ultimately reduces your alertness, causes headaches, and aggravates heart conditions.

Fine particles in the air

During wildfires, wind patterns change, and the smoke moves in various directions — and so do the fine particles. Here’s the problem. Sometimes these particles are too small to be seen with the human eye and can move deep into the respiratory tract and reach the lungs. Of course, inhaling those fine particles causes several health problems, including shortness of breath and respiratory irritation. Plus, it can worsen medical conditions such as heart disease and asthma. Research on wildfire and respiratory issues is well documented. A 2003 study that looked at respiratory systems following exposure to wildfire smoke in California found that those who were most vulnerable were children with smaller airways. Symptoms last for over six days and appear to affect even those who are non-asthmatic and without a history of allergies.

When wildfires strike, smoke directly impacts the body by causing stinging eyes, scratchy throat, runny nose, and irritated sinuses. Breathing in the smoke also has detrimental effects on the lungs, according to the Center for Disease Control and Prevention (CDC) including:

Exposure to smoke also damages the immune system, making it harder to fight viruses and harmful bacteria. A study published in Science Direct found that people living in communities exposed to wildfire smoke had higher rates of the flu during the following flu season. Wildfire smoke may also make you more susceptible to respiratory infections, which could impact a spike in coronavirus cases this fall and winter.

A recent Canadian study found that during the outbreak of wildfires, there generally is a spike in 911 calls for heart attacks and strokes and asthma and other respiratory issues. In addition, research suggests that with the raging wildfires, an increase of out-of-hospital cardiac deaths have occurred due to smoke exposure. Apparently, the heart just stops. Children, pregnant women, the elderly, and those with preexisting heart and respiratory conditions may fare worse.

Protecting yourself from wildfire smoke