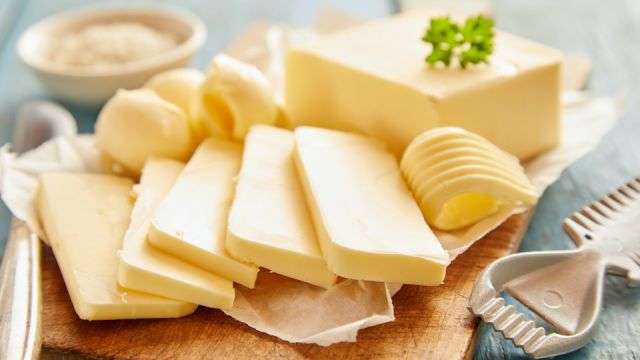 Butter has been around for about 9000 years. A happy accident that quickly became a staple in most people’s homes. What was once a somewhat tedious job for the farmer’s wife has been industrialized by dairy producers, who have perfected the science of making creamy butter by the ton. Butter elevates both sweet and savory dishes, but does it really matter if you buy organic? To answer that question, we need first to explore the organic process between farm to table, the impact organic foods have on the environment, and the difference that organics may make on your health.

It’s not rocket science…The difference between organic butter and non-organic butter is the cream. While the fat and calories are the same, organic butter comes from dairy cows that have been raised and fed on organic pastures. To comply with organic standards, farmer’s must allow their cows to get at least 30 percent of their diet from pasture — during the grazing season — which is a minimum of 120 days. Fresh grass and hay are a cow’s natural diet. But when it comes to organic farming, the grass and soil cannot contain any synthetic pesticides, which is better for the environment. Many organic farmers go beyond the minimum organic standards, allowing their cows to get 60 percent of their diet from organic pasture.

Inspection continues as the cow produces milk, and the milk truck moves to the creamery. Each batch is tested to ensure organic quality standards are met, which means there are no added ingredients, no antibiotics are present, and microbiological quality is good. If anything out of the ordinary is found, then the entire batch of milk on the truck is rejected. Once the milk has cleared inspection and testing has been completed, it’s separated into skim milk and cream. The cream is sent to a creamery where it’s churned into butter.

While the process between conventional and organic butter may be the same, there’s more than just feed that goes into dairy cows. Things that could impact your butter and even your health. Last year a study published in the journal Public Health Nutrition, reported that 60 percent of samples taken from conventional, non-organic retail milk tested positive for antibiotic residue. One of the samples even contained levels of amoxicillin residue that surpassed the federally-allowed limit. Alarmingly, two of those antibiotics (sulfamethazine and sulfathiazole) were banned from dairy production in lactating dairy cows and are currently being used in controversial pesticides.

Unless they are actually sick, lactating cows should not be receiving antibiotics, since any drug residue immediately shows up in the cow’s milk. That would violate the established rules set in place for food production. When milk ships from the farms, they are tested for six of the most generally used antibiotics, according to the NPR. Any truckload that tests positive should be rejected. In fact, when cows are treated with antibiotics, farmers are supposed to discard their milk — for as many days as required — until the residues disappear. However, a report from the Food and Drug Administration (FDA) revealed that some farmers are using antibiotics that the routine tests don’t try to detect because those drugs aren’t supposed to be used on dairy cows at all. And since the survey was conducted for research purposes only, samples were collected anonymously. Therefore, the FDA cannot further investigate any wrongdoing on the farms.

Antibiotics in dairy create a resistance in humans

In addition to antibiotics and hormones, non-organic, conventional farms feed cows with hay, corn, and grass that’s been treated with pesticides. Ingested pesticides in their food translated to pesticides in our food. In fact, according to research from the Center for Ecogenetics and Environmental health, the most common way humans, including infants, are exposed to pesticides is by consuming them in food.

Why organic butter is better for your health

Organic milk, on the other hand, shows no such contaminants. And when it comes to growth hormones, residues were found to be 20 times higher in conventional milk than in organic. Numerous studies have continually shown that organic milk is healthier than conventional milk for human consumption. Organic dairy contains more antioxidants and more omega 3 fatty acids. It also has a higher nutrient profile than non-organic milk, according to the Organic Center. In fact, organic milk is more nutrient-rich because dairy cows under organic management eat more grass than their non-organic counterparts.

Both conventional and organic butter are made similarly. However, if you’re weary about what may be lurking in your butter like antibiotics, growth hormones, and pesticides, then organic is undoubtedly better.  When you buy organic butter, you purchase a product with three or less ingredients – cream, cultures, and salt – but you also buy food that must comply with 57 specific requirements in order to be sold as “organic.” The reason to buy organic is simple; buying organic means buying the highest quality of butter you can get. And that’s better for you and your family’s health.