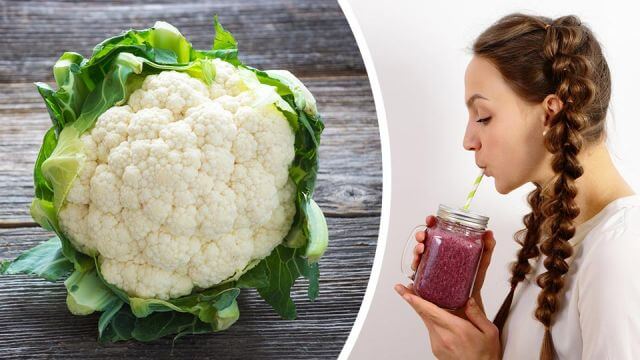 When we are asked to describe the ingredients in a perfect smoothie, a few classic favorites may come to mind. There’s bananas, strawberries, yogurt, oranges, maybe a handful of greens… but few people would probably put cauliflower at the top of the list. However, adding cauliflower to smoothies is a great way to infuse them full of nutrition while adding wonderful texture.

Read on to discover why your next smoothie should most definitely contain cauliflower. Here are the many benefits of cauliflower:

Cauliflower contains a wide range of B-vitamins, important for every system in your body to function optimally.

Cauliflower is a good source of vitamin K, which is integral in supporting healthy blood clotting.

This delicious cruciferous vegetable contains a decent amount of heart and brain-healthy omega-3 fatty acids. Omega-3 fatty acids are known as essential fatty acids, meaning that you need to get them from food. Tossing some cauliflower in your smoothies is a great way to get them.

Cauliflower contains a wealth of minerals, including magnesium, manganese, phosphorus and potassium. It’s also a good source of fiber, which is essential to both cardiovascular and digestive health.

Along with vitamins, minerals and omega-3s, cauliflower is a great source of antioxidants. These include beta-carotene, cinnamic acid, ferulic acid, and quercetin, not to mention the antioxidant vitamin C that was previously mentioned. All of these antioxidants work together to improve your health by neutralizing damaging free radicals throughout your body and helping to lower inflammation.

One group of phytonutrients found in cauliflower are especially important to its benefits: glucosinolates. Glucosinolates are sulfur compounds that have been associated with a sizeable body of research to improvements in immune system health, cardiovascular health, digestive health, support of the body’s detoxification systems and reducing inflammation, to name just a few.

The glucosinolates found in cauliflower and other cruciferous vegetables (such as cabbage, bok choy, broccoli and brussels sprouts) have been linked by research to reduced risk of multiple types of cancer. To summarize some of this research, the authors of a 2013 study published in the Asian Pacific Journal of Cancer Prevention wrote:

“Epidemiological evidence strongly suggests that consumption of dietary phytochemicals found in vegetables and fruit can decrease cancer incidence. Among the various vegetables, broccoli and other cruciferous species appear most closely associated with reduced cancer risk in organs such as the colorectum, lung, prostate and breast. The protecting effects against cancer risk have been attributed, at least partly, due to their comparatively high amounts of glucosinolates, which differentiate them from other vegetables.”

Eating cooked cauliflower may help to lower blood cholesterol, thanks to its ability to bind to bile acids.

Why put cauliflower in your smoothie?

Some of you may be thinking, “That’s great, but cauliflower still sounds weird for a smoothie ingredient.” Weird as it may seem, it’s actually pretty genius. Cauliflower has a very mild flavor, so it won’t actually change the taste of your smoothie much at all if you mix it with other healthy, flavorful ingredients. Also, it will add a creamy texture to the mix, making it very satisfying to sip.

Another reason to add cauliflower to your smoothies (besides the amazing health benefits listed above) is that it’s a great way to get more of this veggie into your diet. Many people don’t eat enough vegetables, and smoothies are a great way to remedy this situation. You won’t taste it, and you’ll still get all of the health benefits that it has to offer.

How to best prepare cauliflower for smoothies

How you choose to add cauliflower to your smoothies is entirely up to you. You can add some raw cauliflower directly to your smoothie. You could steam some up and add it, or you could boil it. You could even use frozen cauliflower. However, despite all types of cauliflower having great health benefits, various cooking methods do affect its nutritional content in different ways.

A 2015 study published in the Journal of Food Composition and Analysis tested the nutritional content of raw, boiled and steamed cauliflower. The researchers involved in this study found that boiling destroyed many benefits, while steaming made them more bioavailable than in raw cauliflower. On their results, the study authors wrote, “In all cases, the highest antioxidant activity was determined in the steamed samples, while the lowest antioxidant activity was in boiled samples.”

So, to get the most antioxidant powers from your cauliflower, you may want to steam up some organic cauliflower (making sure that you don’t overcook it), and add a half cup to one cup to your next smoothie. If you’re new to smoothies, try a base of green tea, almond milk or coconut milk, add a banana, add your cauliflower, throw in some fresh or frozen berries and accent with your other favorite fruits. You could also throw in a handful of fresh leafy greens for an even more amazing kick.

Once you try it, you may want cauliflower in all of your smoothies! Let us know how it goes!