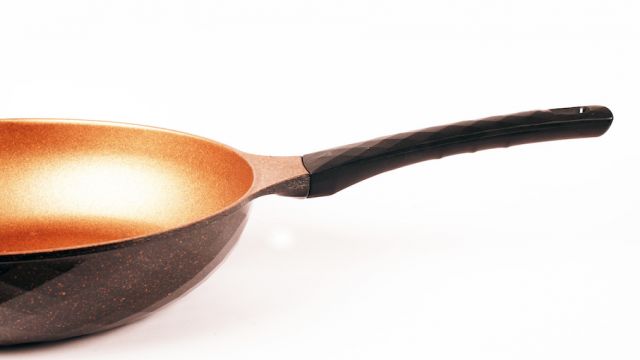 Just when you thought the nonstick pan controversy was a distant memory – here it is again – and this time it is really bad news for men. Researchers from the University of  Padua, Italy, found incriminating evidence against the same chemicals found in nonstick pan coatings and many household and personal care items.

Exposure to perfluorinated compounds (PFCs) has been linked to male hormone disruption and a reduction in penis size. That’s right, if your mother cooked with a nonstick pan when she was pregnant with you or if you were exposed to high levels of PFC’s in your environment (air, water, etc.,) that could explain why you have elevated levels of female hormones and a smaller than average male member

PFCs are a family of chemicals that contain fluorine. There are a number of types of PFCs. The two most commonly found are:

Where are PFC’s found?

Manufacturers have been dumping PFCs into the environment for quite some time now where they contaminate water and food supplies. Exposure can also occur from food packaging, consumer products, and even dust. Here are some of the commonly known products that contain PFC’s

Once thought to be a miracle chemical, due mostly to its low cost, availability and flexible applications, PFC’s are highly toxic, and mounds of evidence pointing to their detrimental health impacts have been steadily rolling out.

According to researchers from the University of Padua, Italy, young men who were exposed to high amounts of PFCs had penises that were 12% shorter and 6.3% thinner than men who did not grow up in chemically polluted areas. These men had penises that measured about half an inch larger.

“This study documents that PFCs have a substantial impact on human male health as they directly interfere with hormonal pathways potentially leading to male infertility,” they wrote. “We found that increased levels of PFCs in plasma and seminal fluid positively correlate with circulating testosterone and with a reduction of semen quality, testicular volume, penile length, and AGD [anogenital distance].”

Researchers also noted that men whose mothers took in PFC’s through nonstick cookware or other means were more likely to have a higher amount of female hormones and a smaller penis.

PFCs are absorbed by the intestines from food or water and can be breathed in. They get into the bloodstream and can become toxic for fetuses when consumed by the mother.

Research area not the only highly polluted place on earth

The area in Italy that contains the test province of Padua is one of four locations that are known to be excessively contaminated by PFC’s. The other three areas are the Dordect area in the Netherlands, the Shandon district in China, and the Mid-Ohio Valley of West Virginia.

It’s not just penis size that we have to worry about. PFCs are very slow to break down and stay in the environment for a very long time. Researchers have found connections between this group of chemicals and some serious health conditions. Here’s a scary fact, the use of these chemicals is so widespread that PFOA is in the blood of 98% of Americans.

A 2016 Harvard study revealed that over six million people in the United States drink, shower and cook with contaminated water. Deadly levels of PFASs and type of PFC were found in public water tanks all over the country. The most at risk states – in order are:

PFCs linked to a host of health problems

Research clearly shows a connection between health conditions such as liver and kidney damage and reproductive issues and exposure to PFCs.

Lower birthweight in animals and human studies has been linked to exposure to PFOA and PFOS.

These chemicals stick around

Once they are in us, these dangerous chemicals stick around. It is estimated to take more than four years to expel a half-dose of PFOA in our body and eight years for a half dose of PFOS.

Scientists estimate that the PFC’s that currently contaminate our earth will continue to threaten the health of its’ inhabitants. It is thought that these stable and dangerous chemicals will outlive human life on Earth.

For the last half-century, PFCs have been produced, employed in the manufacture of common goods and disposed of without much regulation, if any. Thanks to increasing awareness of their danger and the high levels of PFCs in the environment some changes have been made.

How to protect yourself and your family from deadly PFCs