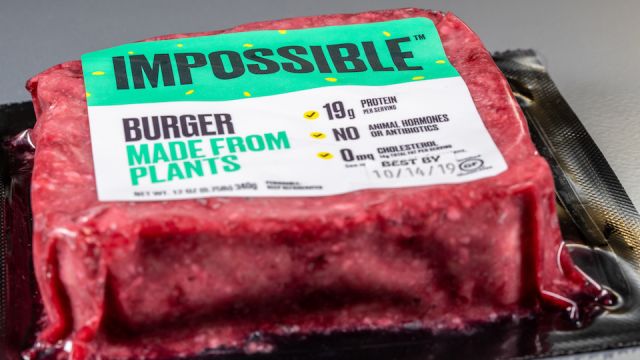 Although meatless burgers are not a new concept, there are more and more meatless products hitting the shelf daily, enticing vegetarians and even meat-eaters to give them a try. Producers of such meat-free burgers claim that these burgers not only taste good, and are healthy, but that they also can save the earth. So, what is the real truth behind these new burgers? Let’s dig in to find out.

The real cost of factory-farmed meat

Most of us are aware of the horrors that factory farming inflicts on animals. We’ve also reported on the many dangers of eating processed meats. As many people know, excessive consumption of factory-raised and processed meat elevates the risk of some severe health conditions such as cancer, heart disease, and diabetes. Not only that, factory farms are a key driver of the climate crisis, land overuse, and drinking water pollution.

Even knowing what is true, millions of Americans continue to consume meat, lots of it. There is a psychological theory known as cognitive dissonance, where we, as humans, struggle with an inconsistency between our beliefs, what we know ( “Meat-eating is bad”), and our behaviors ( “I like eating meat”). To resolve this dissonance, we either change our beliefs or our behavior. Most of the time, people will alter their attitudes to match their behavior. So, those who know that eating highly processed meat is bad, come up with a whole string of excuses for their choices rather than sticking to what they know to be true and ditching meat.

Does the solution lie outside of us and beyond meat?

Is it possible to eat “meat” without experiencing the physical, environmental, and emotional consequences? This was exactly the idea behind one of the newest members of the “meatless burger” tribe, Beyond Meat and Impossible Foods. Both of these companies are famous for creating vegetarian burgers that look like, taste like, and even bleed like beef. Embedded in their efforts is their desire to change the world by changing what society believes about meat, what meat really is. Could it be a true scientific solution to the cognitive dissonance of eating meat?

According to Beyond Meat founder, Ethan Brown,

“If we insist meat be defined by origin—namely poultry, pigs and cows—we face limited choices. But if we define meat by composition and structure—amino acids, lipids, trace minerals, vitamins, and water woven together in the familiar assembly of muscle, or meat—we can innovate toward a solution.”

Impossible Foods states that it “needs society to discard a fundamental cultural idea that dates back millennia and accept a new truth: Meat doesn’t have to come from animals.”

“we can provide meat that delivers health benefits and environmental upside (90 percent fewer greenhouse gas emissions, 99 percent less water, 93 percent less land, and 46 percent less energy) and side steps the animal welfare issue. Humans today will become the first generation …to separate meat from animals, unlocking the next era in the American story of innovation, disruption, and growth.”

Meatless products flying off the shelf

The idea behind meatless meat and its true simplicity seems to be working. Beyond Meat’s products are sold in the meat section of more than 35,000 grocery stores across the nation. Impossible’s products are sold in more than 7,000 restaurants and even in fast-food chains like Burger King. Beyond Meat has a market value of $3.77 billion, and Impossible Food is at $2 billion.

But what exactly is in meatless products?

Despite their popularity, it is crucial to take a look at what exactly is inside the infamous meatless burger. An analysis of the popular new meatless burgers shows that these products are highly processed and scientifically engineered food.

The Impossible Burger contains 21 ingredients, and the Beyond Burger has 22 ingredients. The main ingredients in the Impossible meatless products are soy protein isolate, sunflower oil, and coconut oil; while Beyond’s products include pea protein isolate, coconut oil, and canola oil (oops). It is the oil in the burgers that is supposed to mimic the fat content in beef. While the soy and pea proteins mimic the protein content. In addition, both products contain water, salt, and a binding agent called methylcellulose.

It isn’t rocket science how a cow becomes a hamburger, but Beyond Meat and Impossible Foods both consider their recipes and production methods to be trade secrets. While Impossible makes its own burgers, Beyond Meat does not. Their products are made by two ground beef manufacturers whose websites state that they make beef production only. There is no written contract between these manufacturers; they operate on just a handshake.

Since 2015, powerful meat giants, including Tyson and Cargill, have invested in animal-free protein startups. Now Tyson has moved from investment to ownership of its own plant-based meat brand. Clearly, big meat companies want to tap into the meatless mega-industry that is worth about $1.44 billion and expected to grow to $2.5 billion by 2023. The big question is, should we really trust the same industry that has caused our health and environmental distress?

A new level of laboratory food

Beyond Meat and the Impossible Burger have taken laboratory-processed food to a whole new level. No matter how they are contrived, these products have far better nutritional profiles than beef burgers. They are fewer calories, more protein, and less fat. When you marry these nutritional facts with the research linking meat consumption to disease risk, it becomes easy to convince people that these meatless burgers are the answer.

However, this only works if you ignore the mounting evidence that processed food consumption plays a significant role – some argue even more so than meat – to severe health conditions such as diabetes, heart disease, obesity, and cancer. People who eat a Western diet that is comprised of about 60% of processed foods are markedly more unhealthy than those who eat diets comprised of whole foods.

The National Institutes of Health released a study showing that the obesity epidemic in American is driven mostly by ultra-processed foods. In addition, other studies have also linked processed food consumption to cancer,  cardiovascular incidents, and death.  What is true is that both the Impossible and Beyond burgers clearly fall into the ultra-processed, non-food category, having been literally created in a scientific laboratory using industrial vegetable and seed oils.

Are these meat imposters fooling you?

It is easy to spot processed foods like Cheetos or Twinkies, but companies like Impossible and Beyond are digging in deep to create products that are designed to fool our senses into thinking we are eating whole food when what we are really eating is an ultra-processed meat imposter.

How far will you go to avoid changing your behavior? Would you rather alter your entire definition of meat or simply eat less of better quality meat as part of a healthy whole food diet?

It certainly is something to chew on!