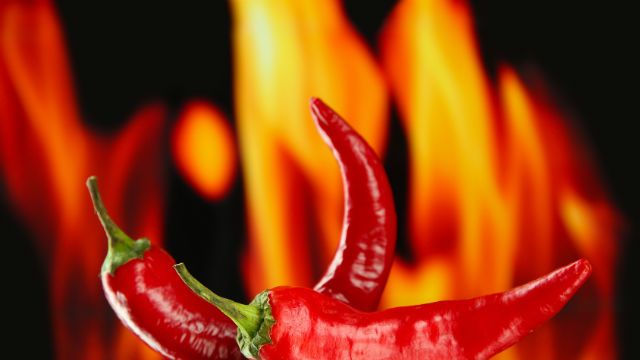 Cayenne pepper has been used for centuries throughout the world, particularly in China and the Americas, for culinary as well as medicinal purposes.

It contains capsaicin, the compound which makes it spicy and also offers a number of therapeutic properties. If you don’t have this fabulous spice in your kitchen cabinet, it’s one you should definitely put at the top of your shopping list.

Capsaicin is believed to have the ability to kill cancer cells. A study published in the Journal of the National Cancer Institute revealed that the substance caused tumor cells to kill themselves in a process known as apoptosis. Another study out of Loma Linda University found that it may even help prevent lung cancer in smokers.

Although cayenne pepper is spicy, it has been shown to help heal intestinal and stomach ulcers, in addition to improving digestion by stimulating the peristaltic movement of the intestines. It can also help relieve digestive issues like gas and abdominal cramps.

Preventing and easing the pain of migraines

A 1998 study published in the Clinical Journal of Pain found that capsaicin worked better than a placebo for cluster headaches, although their research found that the compound needs to be applied topically, such as by swabbing the inside of the nose, in order for it to be effective.

Cayenne has the ability to increase the pulse of the lymphatic and digestive rhythms, which aids in streamlining the natural process of detoxification. This spicy pepper also causes us to sweat, which is an important part of that process.

Capsaicin also works on the sensory nerves, relieving pain caused by arthritis and rheumatism when applied directly to the skin in the form of a cream or a lotion.

Researchers from Laval University in Quebec found that study participants who consumed cayenne pepper for breakfast had less of an appetite, which led to consuming fewer calories throughout the day. It’s also known to help boost the metabolism and aid the body in burning excess fat.

Cayenne pepper helps to normalize blood pressure by regulating the flow of blood from head to toe. It also equalizes blood pressure in the arteries and veins almost immediately. In addition, it can remove blockages present in arteries to improve blood flow.

Cayenne pepper is known to improve cholesterol levels, supply vital nutrients to the heart, remove toxins from the blood and even rebuild blood cells. It can also aid in removing plaque that sticks to the arteries.

Adding cayenne pepper to your diet during allergy season is recommended by many nutrition experts for relieving allergy symptoms. That’s because capsaicin is believed to thin the mucus and stimulate the sinuses, which helps us to breathe more effectively.