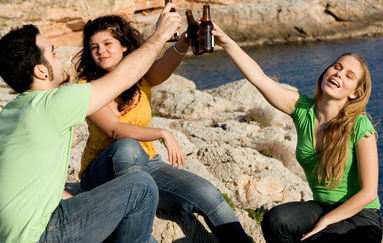 Research performed at Loyola University Stritch School of Medicine has linked binge drinking during adolescence to an impaired ability to respond to stress as an adult, and a likely increased risk of depression and anxiety.

The study, led by Toni Pak, PhD, exposed adolescent rats to a ‘binge pattern’ of alcohol. Binge drinking is defined as having over approximately four or five drinks in one session.

Toni Pak summarizes, “our findings suggest that alcohol exposure during puberty permanently alters the system by which the brain triggers the body to produce stress hormones. This indicates that exposing young people to alcohol could permanently disrupt connections in the brain that are normally formed during puberty and are necessary to ensure healthy adult brain function.”

According to researchers, teenage binge drinking may begin as young as age 13, and peaks between the ages of 18 and 22. The Substance Abuse and Mental Health Services Administration states that 36 percent of adolescents aged 18 to 20 reported one or more binge drinking sessions in the previous 30 days.

This study is just one of many showing negative effects of underage drinking. Many organizations dedicated to stopping teens from using alcohol, including the National Institute on Alcohol Abuse and Alcoholism, stress parental involvement as a key component.

If you have an adolescent or pre-adolescent child, having open lines of communication between you is key. If your child feels comfortable talking to you about any subject, they are more likely to come to you if they are having negative emotions which are leading them to drink.

Sharing a research study such as this with your kids may he helpful, as it could help ingrain the long-term effects of alcohol use in their minds. Spending lots of quality time as a family, especially outside among nature, may also help instill a positive outlook on life in which binge drinking has no place.

One of the most important things a parent can do to influence a child’s behavior is setting a good example. If you drink alcohol in excess yourself, your teen is much more likely to follow suit. Keeping your alcohol intake in moderation is crucial, especially if you have children.