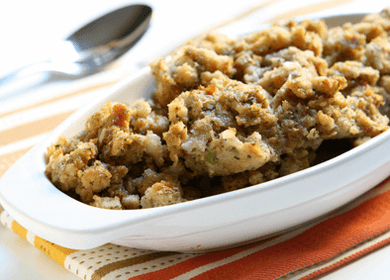 When I was a kid, I remember Thanksgiving dinner as an aggressive, competitive sport. No, it was not about whether the high school football team won or lost. It was about stuffing. And as a sensitive kid, this caused high anxiety for me.

You see, there never was enough stuffing to satisfy everyone around the table. Of course, my grandmother’s stuffing – an old world recipe with lots of dill, onions and mushrooms – was delicious. But it was odd. My grandma, who always made more than enough of everything, never made enough stuffing.

Here is how the Thanksgiving meal played out. It was a one-course extravaganza. All the different dishes would be served at once. Mashed potatoes, sweet potatoes, coleslaw, stuffing, turkey, cranberries, cucumber salad, string beans……. every plate would be overflowing.

Now, my sister, all my cousins and I had to finish everything on the first plate-load before we could take seconds. This resulted in speed eating to get to stuffing seconds. At that time, I was a slow eater. Forty years later, I still feel hostility toward the cousins who ate faster, beat me to the stuffing and took huge second helpings leaving little for me to enjoy. What made matters worse was that my dad, also a fast eater, would start picking the stuffing off my plate (yep, I would save the stuffing for last).

Twenty years later, when my sister and I began to make the family Thanksgiving, I still had high anxiety as we sat down to the Thanksgiving meal. It was a feeling that carried through the entire dinner. And here is what the anxiety did. Somehow, someway, it caused me to eat way beyond the point I felt full. It probably also is a reason I became a fast eater.

It took me awhile to figure out how to work through this anxiety. I thought making lots of stuffing would be the solution. My grandmother’s recipe started with sliced bread. The day before the holiday, she would spread the slices out in the open air to let them dry out. The year I made an overabundance of stuffing, my family could find bread drying in the kitchen, the dining room and the living room. We were still finding crumbs months’ later. (FYI: I now suspect that my grandmother’s small apartment was the reason for the stuffing scarcity).

Well, we certainly had more stuffing that year that anyone could eat. I sent everyone home with big containers of the leftovers. Here is what was comical and tragic. We were still engaging in speed eating. I still felt anxious. I still ate too much, and we really did not enjoy the meal or each other!

Today, I take a very different approach to holiday eating, not just Thanksgiving but all holidays and celebrations. I start with a first course with 3-4 different salads. A soup course follows. Then, comes the main course, served abundantly but not overwhelmingly, with only 3-4 different dishes. Seconds often are not needed. Dessert follows after some time to digest and without the overwhelming choice of pies, cakes and candies. One lovely dessert works, two at the most.

So here is the good news. Holiday eating anxiety is gone. I am eating less. I have become a slower eater again. Our family is using the meal more as an opportunity to connect than to gorge and compete.

The moral of this story: I learned that my eating behaviors often had little to do with hunger. It’s about life’s experiences that trigger real emotions. Once I am mindful of these emotions, it really easier to change eating habits. I now focus on how I eat and why I eat, not how much I eat. Guess what? I am losing weight along the way. Have a great holiday,

P.S. If you have your own Stuffing Story (or another tale of how experiences served to create an eating emotion or eating behavior), I would love it if you could share. Let us know in the comments.

Author of many acclaimed books on nutrition, gourmet cooking, undieting and cardiovascular health, Rob is the creator of the Kardea Kitchen.  The Kitchen is a resource for thousands of people seeking delicious, natural solution for heart healthy living and lasting weight loss.   Learn more about Rob’s latest book, written with Dr. Richard Collins, The Cooking Cardiologist, and un-dieting expert, Susan Buckley, RD, CDE.