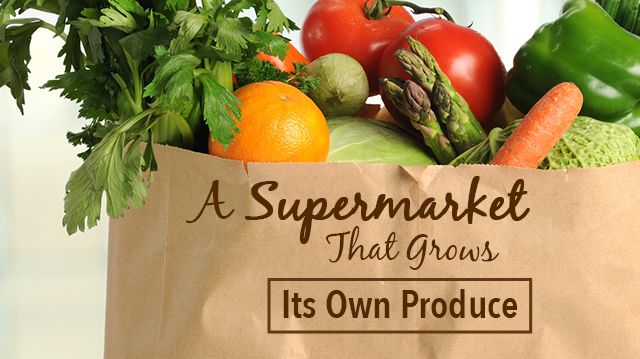 We all want the freshest produce possible, but many people don’t have the time, space or sunlight to grow their own. For those with a bit of window-box space, indoor gardening can be great. However, if you’re in a small living space, you may not be able to grow all of the produce you need in your own home.

When the local farmers market is not in operation, most people head to the neighborhood grocery store to buy their produce. The problem? It may not be so fresh. We’ve all likely had the experience of wilted spinach, soggy-looking radishes, and past-prime tomatoes and avocadoes as the only produce options available.

Along with being kept for too long on the shelf, this less-than-fresh produce condition is often a result of the hundreds, if not thousands, of miles that our food has had to travel from the farm to the store. This commute affects produce freshness and quality greatly. Plus, all of those miles traveled contribute significantly to carbon emissions.

So what’s a store to do to stock the freshest produce? Grow it themselves!

For the past few years, larger grocery stores, hotels and even restaurants have been beginning to sport rooftop gardens. Whole Foods Market Gowanus in Brooklyn, New York, for example, boasts a large organic rooftop garden. Rouses Market, located in downtown New Orleans, also has a rooftop garden over its store.

Other locations with rooftop gardens include Toronto, Canada’s Fairmont Royal York hotel, Manhattan’s Bell Book & Candle restaurant, and Uncommon Ground restaurant in Chicago. According to Uncommon Ground’s executive chef, who spoke to the Chicago Sun-Times: “We just used the peppers from the garden and stuffed them with chorizo. When things from the farm are ready, we’ll incorporate it however we can. I come up once a day to see what’s ripe and ready.”

INFARM is a pilot program, launched in Berlin, Germany, which brings indoor “mini farms” right into grocery stores — even small ones. One of these little vertical farms has recently been installed in Berlin’s METRO supermarket, and it serves to both grow produce and display it to customers.

The INFARM unit at the METRO grows herbs and salad greens, and shoppers can pick their own right from the unit. That’s about as fresh as grocery-store produce can get.

Regarding the concept, INFARM states: “Imagine a future where cities become self-sufficient in their food production, where autonomous farms grow fresh premium produce at affordable prices, eliminating waste and environmental impact.” That would be an exciting future, indeed.

Along with herbs and salad greens, INFARM units can grow other produce, such as peppers and tomatoes. Units can be modified to fit the type of produce a grocer wants to grow, and the plants themselves are stacked so that more can fit into a limited space.

The INFARM program, which started as a micro-garden Indiegogo project, has taken off, and there are plans to start creating more units by the end of this year.

What a wonderful idea! If INFARM sees success and more small businesses adopt these types of in-store gardens, wilted, unappetizing produce could someday be a thing of the past — and our carbon footprint would be greatly reduced, as well.