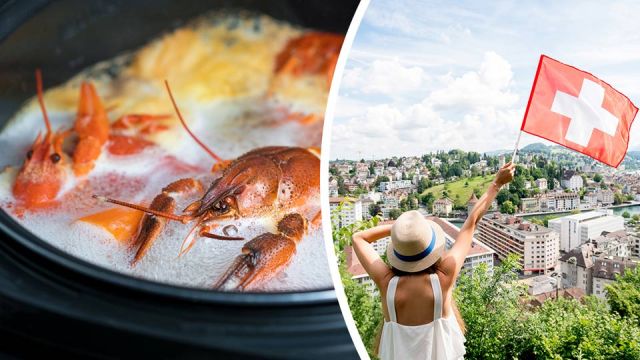 Do live lobsters feel pain when they’re plopped into boiling water? They do scream, after all. Or, is that simply the sound of air escaping from their bodies? Boiling lobsters alive may be common practice for both chefs and home cooks, but is it really the most humane way to cook a lobster? Boiling any animal to death — even if it’s a crustacean — seems barbaric, and surely provides for a slow and agonizing death. Well, now it seems the Swiss agree. A new ruling from the Swiss government makes it illegal to boil live lobsters. So, where do Americans stand on the subject?

A more humane death for lobsters

Scientists and researchers have long debated whether lobsters feel pain. Originally, researchers concluded that animals like lobsters and insects feel no pain thanks to their simple nervous systems. But contrary to popular belief, lobsters do feel pain.

The move to protect lobsters comes after studies suggest lobsters are sentient with advanced nervous systems that may indeed feel pain. As of March 2018, crustaceans being prepared in Switzerland will require chefs to stun or kill them instantly before placing them in boiling water. They’ll also be further protected during transit. Swiss Info reports that “live crustaceans, including the lobster, may no longer be transported on ice or in ice water. Aquatic species must always be kept in their natural environment.”

The new Swiss law comes in the wake of Italy’s decision to ban the practice of keeping lobsters on ice in restaurant kitchens. In July 2017 Italy’s highest courts ruled the act causes lobsters unjustifiable suffering before they are put to death. According to the Telegraph, judges accepted a complaint by an animal rights group against a restaurant owner who kept live crustaceans on ice. He was ordered to pay a €2,000 fine and a further €3,000 in legal fees.

While common opinion among researchers suggests that crustaceans can’t process pain, other scientists strongly disagree. According to a study in the Journal of Experimental Biology, researchers found that crabs purposely avoided electric shocks, suggesting they can, in fact, feel pain. It seems that crabs in the study quickly learned to avoid the shelter in a lab tank where they had repeatedly received a shock. Thus, avoiding the source of probable pain.

Bob Elwood, study author and professor at Queen’s University Belfast, said to BBC News that although he doesn’t know what goes on in a crab’s mind, “The whole behavior goes beyond a straightforward reflex response and it fits all the criteria of pain.”

Additionally, Jelle Atema, a marine biologist at the Woods Hole Oceanographic Institution in Massachusetts and one of the country’s leading experts on lobsters, tells PETA, “I personally believe they do feel pain.” Moreover, he goes on to say that lobsters may even feel more pain than humans would in similar situations.

“Anyone who has ever boiled a lobster live can attest that, when dropped into scalding water, lobsters whip their bodies wildly and scrape the sides of the pot in a desperate attempt to escape,” reports PETA.

What is the most humane way to kill a lobster?

Depending on who you ask, you may get varied responses, when it comes to treating lobsters humanely. For instance, ask an animal advocate about the best way to kill a lobster and they’ll tell you there is no humane way. Others, like the Swiss government, suggest stunning them first. So, what does that entail?

“Using a large, sharp knife, thrust into the right place into the head of the lobster and then cutting down along the midway,” suggests Elwood, but only for an experienced chef. “That should kill the lobster very quickly and effectively. And is probably the most humane way in a small operation.”

Where does the U.S. stand on boiling lobsters live?

Boiling lobsters alive is already illegal in certain places including New Zealand and Reggio Emilia, a city in northern Italy, according to animal rights group, Viva. But how do Americans feel about death through boiling practices? Well, it’s still very much accepted in the U.S. and other countries throughout the world. The fact is, if it doesn’t have fur and whiskers, some people don’t see the need for humanity. Others just don’t want to think that closely into how their favorite delicacy is killed.

However, the ban from Switzerland on boiling lobsters alive certainly raises awareness and is a step in the right direction. As the dominant and most intelligent species on this planet, humans have an obligation to protect all creatures great and small. Does that mean you have to become a vegetarian or vegan? No. This, of course, is a personal choice.

Many of us have pets, so we can completely understand compassion towards our domesticated friends. You wouldn’t want to hurt your cat or dog, would you? So then, how about extending that empathy and compassion towards all other animals, including those raised and killed for food — like lobsters.