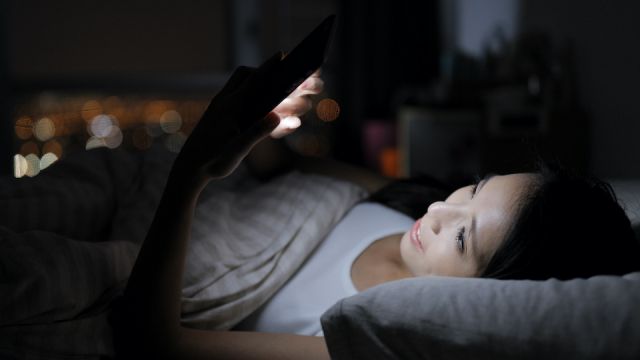 When you go to bed at night, do you really go to bed, or do you sit there and scroll through your news feed, get caught up on emails, and dive down the rabbit hole of social media on your phone or tablet? How often do you take your computer to bed with you to work? All of these things expose you to blue light, which has been found to promote eyestrain leading to damaged retinal cells. That is just the tip of the iceberg, though, as researchers now have found a strong connection between blue light exposure and colorectal cancer.

Scientists found a positive correlation between the amount of blue light shining hear people’s homes at night, and the rates of colorectal cancer. The study looked at 661 people living in two Spanish cities – Madrid and Barcelona, who had been diagnosed with colorectal cancer between 2007 and 2013. This group was compared to a group of 1,322 people who did not have a history of cancer and were matched to the study group by sex and age.

Images taken by the International Space Station provided access to the type of exposure of outdoor artificial light at night across red, green, and blue spectra. Data on where the participants lived and worked along with other cancer risk factors such as age, BMI, family history of cancer, lifestyle habits such as drinking, smoking, exercise, diet, and sleep were collected along with education and socioeconomic status. Those with cancer were, on average, 67 years old and were more likely to have a family history of cancer

According to study co-author, Manolis Kogevinas, the scientific director of the Servo Ochoa Distinction at the Barcelona Institute for Global Health, the research team wanted to build on several other studies that had found a link between night shift work and light that interferes with our internal body clock or circadian rhythm. Previous links have been found between blue light and breast and prostate cancer.

In the journal of Epidemiology, where the study was published, the researchers said that circadian rhythms are very closely linked to hormones. It is thought that exposure to blue light at night can change the production of certain types of chemicals. This information was built upon previous links to circadian disruption and colon cancer in animal studies.

Being exposed to artificial light at night may depress and delay the release of the hormone melatonin, which is linked to tumor growth and made in the dark phase of the body’s 24-hour cycle.

Not quite granular enough

According to Kogevinas, the study was somewhat limited because they were not able to accurately measure the amount of light that reaches people’s homes.

“I would have liked to have a few thousand people wearing a personal light sensor for a few years! This would have given a much more accurate estimate of light. We measure environmental light and particularly blue light accurately but we are not really measuring what reaches the eyes of the person.”

However, what researchers did find is that exposure to light at night is not a neutral factor in health and wellbeing. In fact, it is something that should be taken seriously. The body needs dark time. Complete dark time, and when it is derailed off of its normal clock and rhythm, the impact is not negligible.

What about computers, tablets, and phones?

Although the latest research does not specifically look at blue light from computers, phones, and tablets, researchers still made a connection and a recommendation.

“Exposing ourselves to unnecessary levels, particularly of blue light, is not necessary. Part of the blue light exposures comes from tablets and smartphones. Companies should develop more their technologies to reduce even further the light emissions.”

So, the takeaway here is that if you have lots of light outside of your bedroom window, get dark out curtains or blinds and keep them shut tight at night. If you are in the habit of taking your phone to bed with you…quit. Leave it outside your bedroom somewhere so that you are not tempted to reach for it during the night. And, stop working in bed! When it is time for sleep, honor your body and give it what it needs to be healthy. Rest is paramount, and exposure to blue light interferes with your body’s natural ability to heal and re-energize!