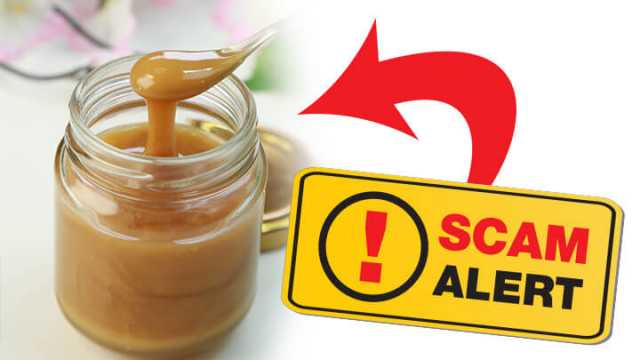 Manuka honey, the world’s most prized honey, is said to treat everything from acne and eczema to sore throats and staph infections. However, anything that precious generally comes with a hefty price-tag. And just like so many precious commodities, there’s always someone ready to peddle a poorer-quality version and market it as the “real deal.” So, how do you know if that manuka honey in your cupboard is genuine or simply a forgery?

What makes manuka honey so special?

Manuka honey is widely recognized and highly sought after. It may be popular with the rich and famous, but it’s hardly a trend — it’s been used medicinally for thousands of years. This unique and beneficial honey comes from the nectar of the flower of the manuka bush, which is indigenous to New Zealand. And what makes manuka honey so special (even more than raw honey) is its amazing nutritional profile.

In 1981, researchers Dr. Peter Molan and Kerry Simpson at the University of Waikato, New Zealand discovered that manuka honey had an unusual type of antibacterial activity. Regular honey, also used to treat a variety of ailments, has been known to have broad-spectrum antimicrobial properties. These medicinal benefits, exhibited in several types of honey, is believed to come from low pH, high sugar concentration and the presence of bacteriostatic and bactericidal compounds. Hydrogen peroxide, antioxidants, lysozyme, polyphenols, phenolic acids, flavonoids and bee peptides are sometimes referred to as honey’s “peroxide” activity.

But what makes manuka honey so special? It has additional antimicrobial activity that goes above and beyond common honey, according to Analytica Laboratories. And some strains of manuka honey are even richer in hydrogen peroxide, methylglyoxal and dihydroxyacetone. But, here’s where things can get dicey.

Not all manuka honey is created equal

Hydrogen peroxide, methylglyoxal and dihydroxyacetone help make up what is referred to as the Unique Manuka Factor (UMF), a global standard of identifying and measuring the antibacterial strength of manuka. The UMF guarantees that the honey being sold is of a medicinal quality. However, UMF is not readily found in the nectar of all manuka flowers. So, just because your honey is made from manuka flowers it doesn’t mean it is any more beneficial than most common types of honey.

What separates UMF manuka from other manuka varieties is that it has both the natural hydrogen peroxide and its own natural UMF antibacterial property. And that significantly enhances its effectiveness. In addition, the UMF properties of manuka are extremely stable. And, unlike the hydrogen peroxide found in regular honey, it’s not easily destroyed by heat, light and enzymes in the body. That elevates manuka honey into a superfood of sorts.

Most genuine high-grade manuka honey from New Zealand includes a UMF rating on the label. Some honey producers might use an MG (most genuine) or MGO rating. Honey without a UMF or MG/MGO rating is generally low-grade without the characteristics that make premium manuka honey so medicinally beneficial.

UMF is a quality trademark and grading system that is supposed to assure the consumer that the product is unique. The grading system also means the honey contains the beneficial properties found only in some strains. The UMF designation and rating is a highly sought-after and well-respected quality trademark, according to genuine manuka honey specialists, Summer Glow Apiaries.

Yet, while only 1,700 tons of genuine UMF honey is produced annually, according to ExportX, it seems that 10,000 tons more are being sold annually throughout the world. And that’s an indication that your genuine UMF honey might actually be a sham, suggests research commissioned by the Sunday Times of London.

According to the New York Post, a mass spectrometer analysis was created to compare genuine manuka from New Zealand hives to manuka-labeled honey sold in British stores and online through Amazon. They determined that many jars were fake. It seems that genuine manuka honey’s specific compounds could not be detected in any of the retailers supposed manuka. This prompted high-end London grocer Fortnum & Mason to clear all the “manuka honey” off its shelves after they failed the British paper’s test.

What’s in a label?

It may be hard to know for sure if you’re actually getting what you paid for. But, according to the UMF (Unique Manuka Factor) Honey Association, genuine manuka honey should fulfill all five of the following criteria:

The UMF rating, an internationally-recognized trademark, guarantees the presence of required manuka ingredients DHA (dihydroxyacetone), methylglyoxal and leptospiren. It assures the purity and quality of the manuka honey. The UMF quality trademark ranges from five and upwards:

In addition, honey with an MGO rating on the bottle such as “MGO 400” or “MGO 550” are equivalent to the following UMF ranges, according to ExportX:

There’s no doubt why starlets such as Gwyneth Paltrow and Scarlett Johansson consume manuka honey. According to Dr. Josh Axe, manuka honey works marvelously for acne and eczema. Research even suggests it could help heal strep throat, generally treated with antibiotics. And hospitals all over the world are now using active manuka honey with conventional medication to treat several conditions like wound healing. But, before you dive into that next jar of manuka honey, make sure you’re getting the real deal. Check the label for a UMF code and choose a range of five and higher.

Discover all the other amazing ways Honey HEALS your ailing body =>