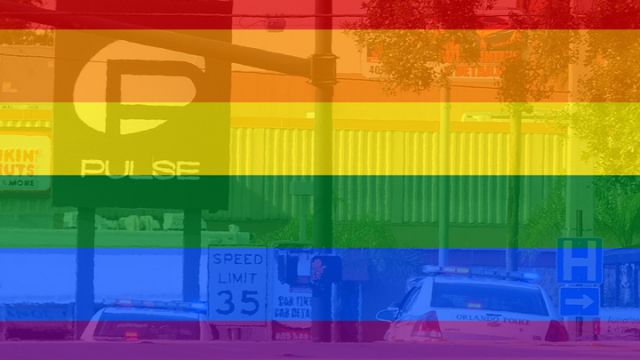 By now, most of you are probably well aware of the mass shooting that took place at a gay nightclub in Orlando, Florida. This is another senseless act of terrorism, which has a connection to ISIS – at least in the sense that the killer called in prior to the attack to support solidarity with their cause. As is so often the case, particularly right around the time of these tragedies, we are not always clear on the killer’s motives. The identification with ISIS may have simply been an excuse provided to carry out a horrific act – to pass the blame – so the killer might somehow feel justified in their barbaric act, a convoluted way of connecting to a bigger hatred. Regardless, it is very sad.

I am 33 years old. This type of news, albeit devastatingly shocking, has almost become routine. I remember Jonesboro and Columbine and countless others that have happened, including the awful tragedy in Sandy Hook. I remember Virginia Tech, Charleston and Aurora. I remember being scared of the “Trench-coat” mafia. I remember being on edge for many days after each of these acts of violence.

Quite often, and particularly after each mass shooting, I think about the conversation I would like to have with the next mass shooter. Yes, I said the NEXT person who is thinking about killing people in droves. Growing up, I always had this thought, this idea … what if I could talk to the next person who is contemplating going this route? Could I help to trigger a change in their mindset? Ever since I became aware of these types of hurtful attacks, I knew there would always be another. And if I could just reach out, maybe, just maybe, there might be a mental mind shift that might stop it before it happened.

To the next person thinking of doing such a thing, “can you imagine a different way to deal with how you feel, and what you believe, that wouldn’t cause such irreversible hurt, heartache and pain? It really doesn’t have to be this way.”

I know that mental health issues very often play a role. And of course, one could also debate whether a particular person is being led by some sort of extremism.

But what if it were possible to have that discussion with the next shooter, shouldn’t we have it? Shouldn’t we at least try to connect? To help another person pursue light rather than foster a greater darkness?

What if we could talk to them, out of love, and explain the deep sadness that this brings, not just to the general public, but the ones directly attacked. More often than not, the people that have been injured or killed are truly innocent bystanders. And more often than not, the next killer will be doing this to make a bigger statement.

Religious extremism or not, mentally ill or not, we are all uniquely connected at our core. We have a shared experience. We are born, we live and then we die.

That is a very humbling statement to admit to. But it is something that brings us together more than any other animal species in this world. We all know that we will die someday. No other living organism is able to contemplate this reality. Yet, this is something that every single one of us has in common. We can connect via this truth. There are over 7 billion people that have this common trait. So stripped away to our core, we are the same. And, I believe, if we can talk to each other as people living the same human experience, we can be the change we want.

One might argue that there will always be mentally ill people that do this, and they might be right. But what if one conversation could inspire someone to make a different choice, to head in a better direction? What if it were possible to bring a new sense of reality into another life, one that produced hope, and compassion, and love?

At this point in 2016, with the US presidential election coming up, and in the UK the divisions surrounding Brexit, and in so many other parts of the world, we are all extremely divided on issues of politics, race, religion, hell even sports. But those are all mental constructs we have created in order to be part of different tribes. Sadly, these constructs have done even further damage, causing serious divisions amongst us.

I don’t care about your religion, race or creed. I honestly don’t. At the very core of our being, we share a very common thread. And if you and I could put down our mental constructs for a few minutes, and just connect, we might be able to make some progress. Share, love and listen.

My daughter is about to turn 4 years old. I saw her playing this morning with her friend that lives next door. Different backgrounds. Different stories. Different hair. Different lifestyles. Different parents. Different. Except at their core. These 2 sweet little girls did not know what was going on in Orlando today. They just played with each other. Sharing, playing, swimming, laughing, eating and drinking.

Maybe it is time in our world to be more like our children. Let’s start with what they do best – accepting others just as they are and talking and playing.

There is not very much most of us can do right now for the victims and families involved in this tragedy. We can continue to think about them, pray, send good thoughts and donate blood if you are in the area.

But here is something we can do right now. Play with your kids. Talk with your kids (not just to them). Accept them, love them, enjoy the time you spend with them. If you don’t have kids, enjoy time with friends and family. The love and support we get from friends and family is what truly keeps this world moving forward in a positive direction.

Let’s put down our phones. Let’s turn off our computers and TV. Let’s take our earbuds out. And create real human to human connections. Smile at the person you walk past. Say hello to the person at the grocery store.

This won’t be the last shooting. How many more must we endure? Who knows. But we can give a smile to a stranger. Don’t underestimate the power of an unexpected smile … or act of kindness. This could change that person’s whole day. And who knows, that seemingly little change, might make a huge difference in their life … giving hope to brighten a life.

We will all be subjected to a lot of media coverage about this event, and be reminded of other similar events, and how there are hateful groups of people out there. We will hear partisan comments about how this event supports such-and-such a presidential candidate, or how gun ownership is the answer, or how gun control is the answer, or that we need to make sure that we avoid going to dangerous locations (as if that were really even possible). All sorts of ‘traditional’ solutions.

Why don’t we instead do something not so traditional? Let’s choose to make this a time of personal reflection and commitment to live a life that fosters hope. One where we aren’t suspicious of everyone, but are kind to those around us.

Who knows, you may be the one who gets to talk to that prospective future mass shooter and steer them away from a tragedy. Your act of kindness could make all the difference. Sure, you may not find out until sometime in eternity that you made the difference – but what a great mission in life – a person who builds bridges between people, who accepts, who connects, who loves. That is the power within each of us.

Jake is the founder and CEO of The Alternative Daily. You can follow him on twitter here @JakeSurfs