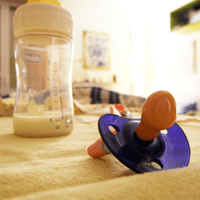 For many years, consumer safety organizations have protested the use of bisphenol A (BPA) in consumer products, especially those used by children. Although the chemistry companies that produce BPA have declared it is safe for humans, it has been linked to unusually high levels of estrogen in children and a contributing factor to the development of obesity, reproductive organ mutations and other health issues.

BPA has been used in plastic bottles and food packaging since the 1960s. Although the plastic industry has declared BPA to be entirely safe for humans, it contains chemicals that mimic the hormone estrogen. It has been found in breast milk, umbilical cord blood and pregnant women’s blood samples. Additionally, it has been linked to health problems in brain development of children, behavior problems and deformities in the prostate glands of fetuses.

Plastic bottles, beverage containers and sippy cups used by toddlers have contained high levels of the chemical. Many plastic products used by children contain BPA, such as soda bottles, bottles of infant formula and food containers. The chemical can leach from the plastic container into foods that are consumed by children and adults.

Until recently, the FDA stated that BPA is safe for human use, in agreement with plastic industry manufacturers. However, many regional government organizations have banned BPA products, including the city of Chicago, Suffolk County, New York and the country of Canada.

In response, several plastic container manufacturers began producing baby bottles that do not contain BPA. Plastic containers and food packaging items that contain BPA are marked with a “7″ on the bottom to distinguish them for recycling.

If you are going to use plastic containers for beverages and food storage, look for items that do not have a “7″on the bottom. Even better, use glass or paper containers when possible.

It may not be possible to protect your child from every potential environmental toxin out there. But by limiting the toxins you introduce to their system, you can keep them as healthy as possible.

What alternatives for plastic containers do you use? Let us know with you comments. We’d love to hear your ideas!