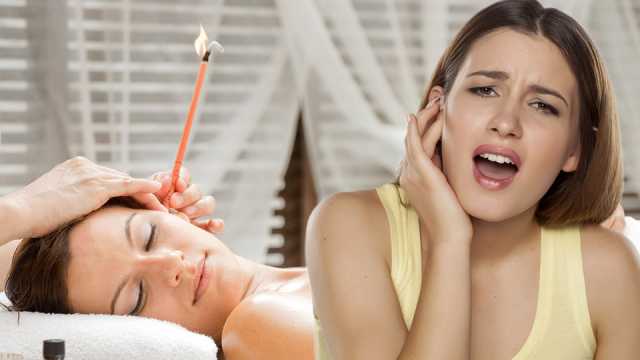 It’s a sad fact that certain things in life are just too good to be true. This very much applies to the alternative health industry, which in many cases is built largely on popular opinion rather than scientific fact. But despite a notable lack of supporting research, there are those products and treatments that I’m more than happy to use on myself because I know without a shadow of doubt that they’re safe and effective. Ear candling is not one of them.

Ear candling is an ancient technique, thought to have been developed in China, Egypt or Tibet thousands of years ago. Interestingly, few cultures actually lay claim to being the pioneers of this treatment, perhaps giving us an idea of how hesitant most of the world is to use ear candling.

The premise behind ear candling, otherwise known as ear coning or thermal-auricular therapy, is relatively simple. The small end of an 11-inch-long hollow wax “candle” is inserted into the ear canal. The larger, opposite end of the candle is lit, and the ensuing heat created by the flame is supposed to create a mild vacuum that draws out wax and other impurities lodged inside the ear.

When the ear candling therapy goes well, people report a pleasant soft heat inside their ear and sometimes the sound of gently rushing water. Supporters of ear candling claim that one can expect the therapy to remove foreign debris and old accumulated wax from the ear, along with evaporation of excess moisture from the ear canal.

Many spas and spiritual centers offer ear candling. It is seen by some as not only an effective way to clear out blocked ear canals, but also a spiritual experience that cleanses the body and mind of harmful energies.

Mild heat and a pleasant rushing sensation is the best case scenario. Often, however, things can go horribly wrong. Because ear candles can be bought in-store without a prescription and self-administered, even the slightest mistake can cause serious damage to the ear.

Doctors often report people making appointments to see a physician after they physically burned themselves with the candle — either via hot wax dripping into their ear, or the flame itself singing them. There are also growing reports of wax impactions in the ear actually made worse by ear candling, or of cases where the ear candle was completely unsuited to resolving the ear problem. Often, it’s hard to make a distinction between a simple wax-blocked ear and a serious ear infection, which can be exacerbated by shoving a hot candle into the ear. Some people can even go so far as to shove the ear candle too deep into their ear canal, damaging the sensitive eardrum inside.

The truth about ear candling

Now don’t get me wrong — I have a very open mind when it comes to alternative therapies and treatments. Growing up, I’d traipse into the doctor’s office at least once every summer to get my ears either pumped out due to wax build up, or treated due to infection. Certainly, the appeal of ear candling has tempted me from time to time. But after looking beyond the hearsay and into the actual scientific evidence, there’s nothing that assures me ear candling is a safe, effective treatment.

For starters, there are all the documented cases of people harming themselves when their ear candling experiment goes wrong. A survey of 122 otolaryngologists identified 21 ear injuries resulting from ear candle use, prompting many of them to conclude that “ear candles have no benefit in the management of cerumen and may result in serious injury.”

In a case study presented in a 2007 journal article, a 50-year-old woman was presented to her GP after an ear candling mishap. She had burned her hand while attempting to remove the ear candling, spilling hot wax deep into her ear. She had to be operated on, and during the operation the specialist removed “a large mass of solidified yellow candle wax” from deep inside the ear canal. That hot wax had perforated her tympanic membrane, causing mild hearing loss which still hadn’t healed one month later.

That was just one case in many. In another article, brazenly titled “Ear Candles: A Triumph Of Ignorance Over Science,” researchers stated “the inescapable conclusion is that ear candles do more harm than good. Their use should be discouraged.”

Next, there’s the fact that it almost never works! Supporters of ear candling and those who have “successfully” used this therapy tell tales of finding large residue deposits inside the candle after completing the therapy. While there is no doubt that this residue does exist, in the large majority of cases this residue is in fact accumulated soot from the flame and dislodged wax deposits from the candle walls.

Finally, and this is the nail in the coffin in my opinion, studies show that the whole premise of the ear candle is complete bonkers! This study, for example, performed lab tests to see whether ear candling actually does anything and stated, “tympanometric measurements in an ear canal model demonstrated that ear candles do not produce negative pressure.” And it wouldn’t be the only time researchers have been unable to prove that ear candles actually produce any form vacuum to draw all that wax and gunk out.

Ear candles are a hoax

I almost feel a bit bad labeling ear candling as a hoax, but all the evidence points towards it being just that. The candles don’t actually do what they say they do, the residue inside the candle after treatment is in fact due to the candle itself, and added to all that is a risk of serious burns or even hearing damage! I think I’ll stick to the tried-and-true home remedies for removing ear wax, thanks very much.